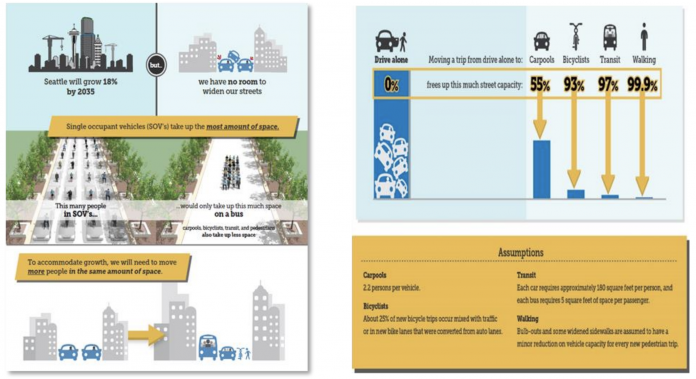 On Wednesday, the Seattle City Council’s held the last Planning, Land Use, and Zoning Committee meeting of the year. Three items were on the agenda, with changes to regulatory requirements for transportation level-of-service standards being the most substantial issue before councilmembers and receiving a vote out of committee. Councilmembers also heard briefings on new design guidelines for the University District and Uptown. Both sets of proposed design guidelines follow on the heels of rezoning frameworks that the city council approved in 2017.

During the meeting, staff from the Seattle Department of Construction and Inspections (SDCI) and Office of Planning and Community Development (OPCD) briefed councilmembers on a suite of proposed changes to the city’s regulatory requirements for transportation level-of-service (LOS) standards. These requirements are addressed at the project-level review of development proposals.

The proposed changes are designed to better implement recent LOS policy changes that were made through the city’s comprehensive plan update in 2016. One of the key paradigm shifts that took place in the update was to set specific target rates of transportation modes (e.g., walking, biking, transit, and driving) across eight geographic areas (sectors) of the city, which would be achieved by 2035. Within each geographic sector, the comprehensive plan identifies the single-occupant vehicle (SOV) rate as a percentage of total trips in 2016 and a target rate for 2035, which is generally lower than than the 2016 number. Previously, the comprehensive plan had measured LOS based upon the ratio of traffic volume to arterial capacity on key corridors.

Following the staff presentation, Councilmember Mike O’Brien noted that some constituents wondered why some projects below the proposed thresholds should not have to participate in reducing SOV trips. In response to that, he expressed interest in an amendment that would require those type of projects to still implement mitigation measures to reduce SOV trips and rely upon a revised Joint Director’s Rule to specify what scale of mitigation would be necessary. However, Michael Hubner and Gordon Clowers, planners for SDCI and OPCD, explained that implementation of that concept may be challenging for small development (less than 30 daily trips) projects because the scalability of mitigation measures in the revised Joint Director’s Rule are more appropriate to larger projects.

Councilmember Lisa Herbold did raise an issue that she has heard from constituents with the Urban Centers, particularly in Downtown Seattle, “getting a pass” from participation in the regulatory requirements to reduce SOV through project mitigation measures. She asked if the legislation would still maintain a requirement for a transportation impact analysis and possible mitigation if not subject to SEPA. Mr. Hubner affirmed that the legislation would still retain the requirement for residential projects in Downtown zones. Councilmember Herbold later expressed an interest in establishing off-street parking maximums on residential development in the Urban Centers in the future similar to commercial development.

The legislation moved out of committee and will be held for a final vote by the city council until January 14th. Based upon the discussion by councilmembers, an amendment to adjust the threshold for development projects to propose measures to reduce SOV trips will likely be made to the legislation prior to final vote of passage.

New Design Guidelines for the University District and Uptown

Separately, councilmembers learned about proposed changes to existing design guidelines for the University District and Uptown. The design guidelines apply to projects subject to design review and located within the guideline applicable areas in addition to citywide design guidelines. Both documents are getting a revamp as part of neighborhood planning processes that largely concluded last year with the adoption of rezones and development regulation changes. Those rezones included Mandatory Housing Affordability (MHA) requirements, a prelude to the citywide MHA rezones under consideration and possible implementation early next year.

The revised University District design guidelines acknowledge many of the key gateways and character areas and provides new guidance on how development should respond to the local context. With the neighborhood rezone mostly adopted, much denser and taller development will be possible in the neighborhood core. Development regulations for the neighborhood also provide much more specific urban design requirements, such as sidewalk width, transparency, building lengths, and modulation. Pairing the design guidelines to these new regulatory features was an important aspect of the update. The design guidelines could get a full city council vote next year, having passed out of committee. Several minor tweaks will likely be made to the document.

Like the University District, the Uptown neighborhood received significant zoning changes that will allow more highrise and midrise commerical and mixed-use development. The zoning changes, too, came paired with revamped development regulations to promote block-by-block and neighborhood-wide urban design standards. Updating the neighborhood design guidelines was a complimentary conclusion of the neighborhood urban design framework. The proposed design guideline changes are still draft, however, and must come back to committee for hearing and vote before a final city council vote, which presumably could be accomplished by the end of the first quarter.