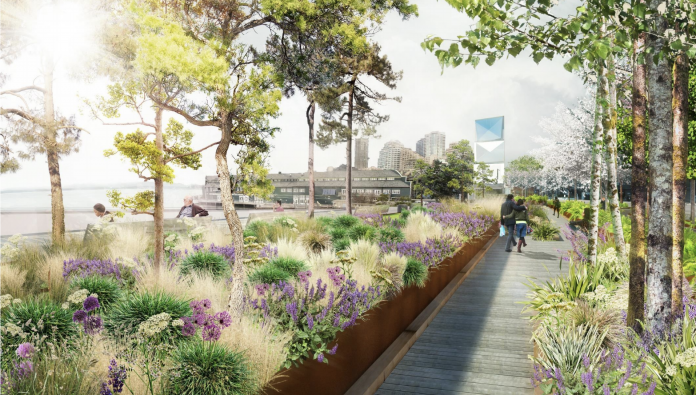 On Thursday, Mayor Jenny Durkan announced a grand bargain that is poised to help Seattle realize its ambitious $712 million ‘Waterfront for All’ public works project. The grand bargain will put residential condominium and commercial owners in Downtown Seattle neighborhoods on the hook for $160 million in special property tax assessments over 20 years. This is pared back from the original proposal of $200 million.

Mayor Durkan held a press conference at the Seattle Aquarium to herald the bargain and its far-reaching efforts to breath new life into the waterfront. “When this project is finished, I think that this waterfront will not only rival the High Line in New York, or Stanley Park, or the waterfront on the lake in Zurich, it will be one of the global destinations that everybody talks about,” she said.

State law allows for the creation of local improvement districts (LIDs), which impose special property tax assessments, where property owners stand to directly benefit from nearby public improvements. In other words, they act as a value capture method from projected property value increases. A recent example was a LID formed in South Lake Union to partially fund construction of the streetcar line in that neighborhood.

Last year, many property owners were vocal that they planned to protest the proposed LID due to the amount of special tax assessments that they would eventually owe. The City sought written agreement from a large number of property owners, enough to avoid a successful protest majority to the LID. If property owners representing at least 60% of the assessed property value within the LID were to submit protests, the LID would fail to be created. The agreement reached, however, should prevent this type of situation, all but guaranteeing approval of the waterfront LID by the Seattle City Council early this year.

The special tax assessments of the LID can be paid as a lump sum, monthly, or annually by a property owner, though additional interest may be due, depending upon the option chosen. There are alternative payments options available to property owners experiencing economic hardship or who are considered low-income, disabled, or elderly.

The City believes that the typical condo owner will pay an extra $8 per month or $96 per year over a 20-year period to the LID. That works out to about $1,900, which is $500 fewer than the original LID proposal. Apartment tenants could expect to pay about half that if their landlord passes on the assessment costs in their rent. Commercial property owners will be on the hook for about $3,500 in special tax assessments over the same period–a mere $25 per month or $300 per year. That is down substantially from the initial average special tax assessment of $7,400.

Commercial property owners, which include those controlling apartments, make up the largest share of the property tax assessments and represent the largest number of tenants while condo dwellers number just over 4,600 households.

With property owners paying about $160 million, down $40 million from the original plan for the waterfront, other funding sources will have to make up the difference. Friends of the Waterfront, a philanthropic arm of waterfront interests, will kick in $110 million for the project, up from the $100 million originally anticipated. That means local benefactors will play a slightly bigger role in funding the project. The State contribution at $193 million will remain the same while the City contribution, funded largely by a general property tax, will rise to $249 million, up from $224 million.

Mayor Durkan explained that added City revenue would come in the form of the existing commercial parking tax. With bonds backed by the commercial parking tax expiring, there should be more capacity available from that revenue stream, which mostly comes from Downtown Seattle properties. She added that no new taxes would be required to fund the waterfront projects.

The flipside of a smaller LID and higher contributions by the City as a whole is less capacity to invest in other public priorities.

During the press conference, Mayor Durkan boasted of the imminent waterfront transformation. “Not only will the viaduct and that scar that separates us from our waterfront be gone, the noise will be gone,” she said. “The Pike Place Market will be connected through the overlook walk. There will be a 20-acre park in the heart of the city.”

The waterfront has been under construction for years as the big seawall rebuild began and preparations for the viaduct to come down this year were made. The Waterfront for All vision, however, would made deep improvements with new beach access, a wide pedestrian promenade from Pioneer Square/SoDo to Piers 62/63, revamped park pier space, and grand connections to many east-wide streets and Pike Place Market.

Once the viaduct has been removed, construction on the central waterfront promenade and finger connections could begin. Work has already been progressing on the Pier 62/63 park rebuild and habitat improvements.

As a next step to bankrolling the projects, however, Mayor Durkan will transmit the LID ordinance to the city council for review and approval.