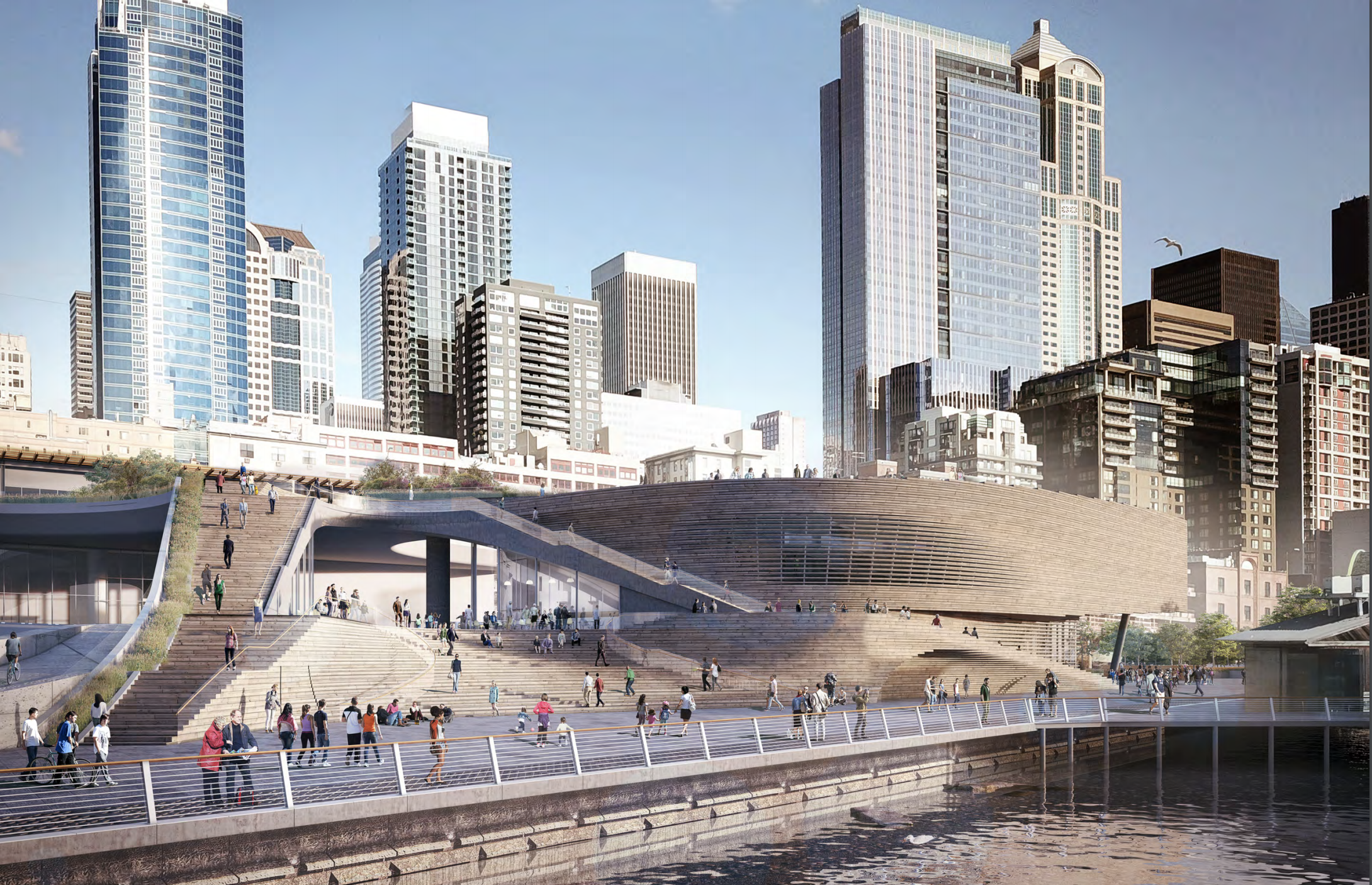 On April 19th the proposed design for the new Overlook Walk and Seattle Aquarium Ocean Pavilion went before the Design Commission and was approved with one condition and several recommendations. The Overlook Walk is described as ” a signature element”  for the redesign of the waterfront and will be composed of “a series of walkways, stairs, plazas, and overlooks that provide a key connection between the waterfront and Pike Place Market.” The project also includes two buildings, one of which, the Market Front building is already built.

The Ocean Pavilion is an expansion of the existing Seattle Aquarium and will provide additional exhibit and educational space. It will “integrate with the south stair and adjacent spaces that are a part of the Overlook Walk,” the design packet states. “The 3-story facility will also include public spaces, amphitheater, and educational space on the rooftop, which is directly connected to the pathways and public spaces along the upper portions of the Overlook Walk and is publicly accessible through stair and elevator along the southern edge of the pavilion.” 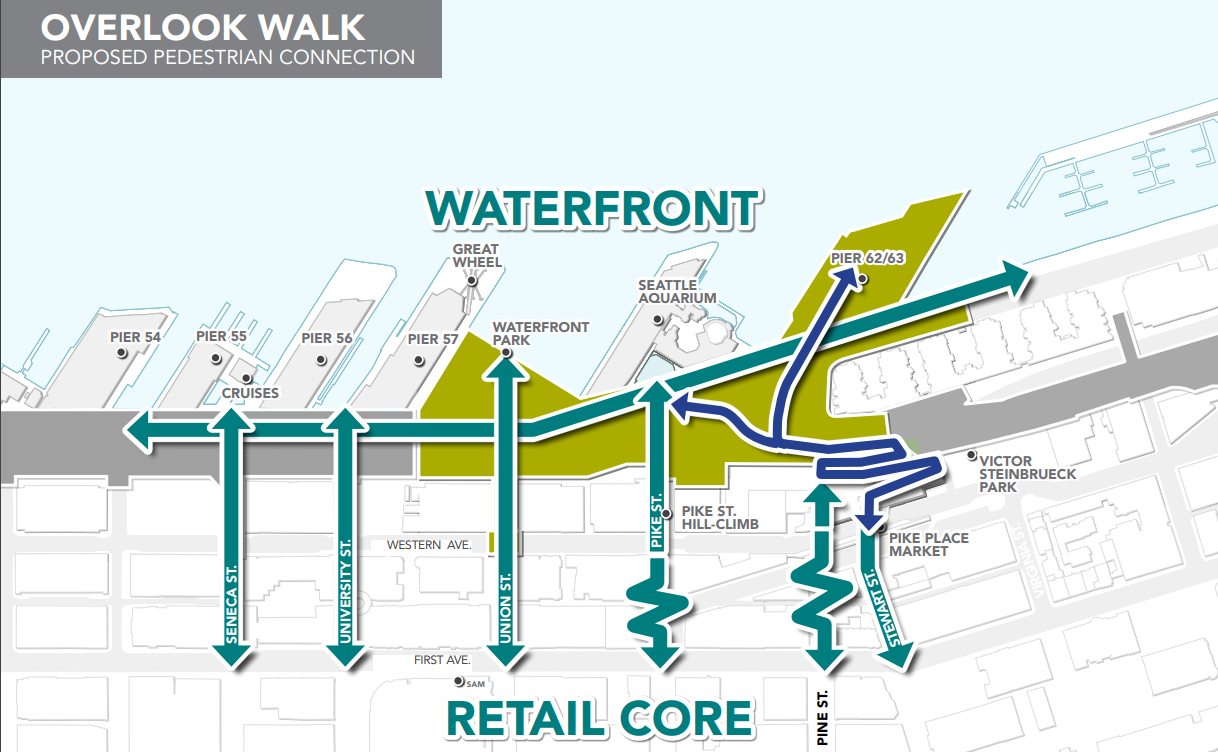 While I have appreciated that the removal of the Alaska Way Viaduct will transform the waterfront and open it up to the public, what I had seen thus far had mostly appeared rather tame, such as the new Market Front building at Pike Place Market and images of the proposed boulevard and its walking/biking paths. This new set of drawing really shows the change in aesthetic tone that will take place. Part of the charm of Seattle’s waterfront is that has been somewhat frozen in time and served as a tourist zone isolated from the broader downtown by the concrete wall of the viaduct. The Overlook walk promises to both open up the waterfront and connect it to downtown, and to disrupt the old-timey, tourist centered look and feel of it with a far more contemporary space. Hopefully this will be a place that is used and loved by residents and tourists a like. 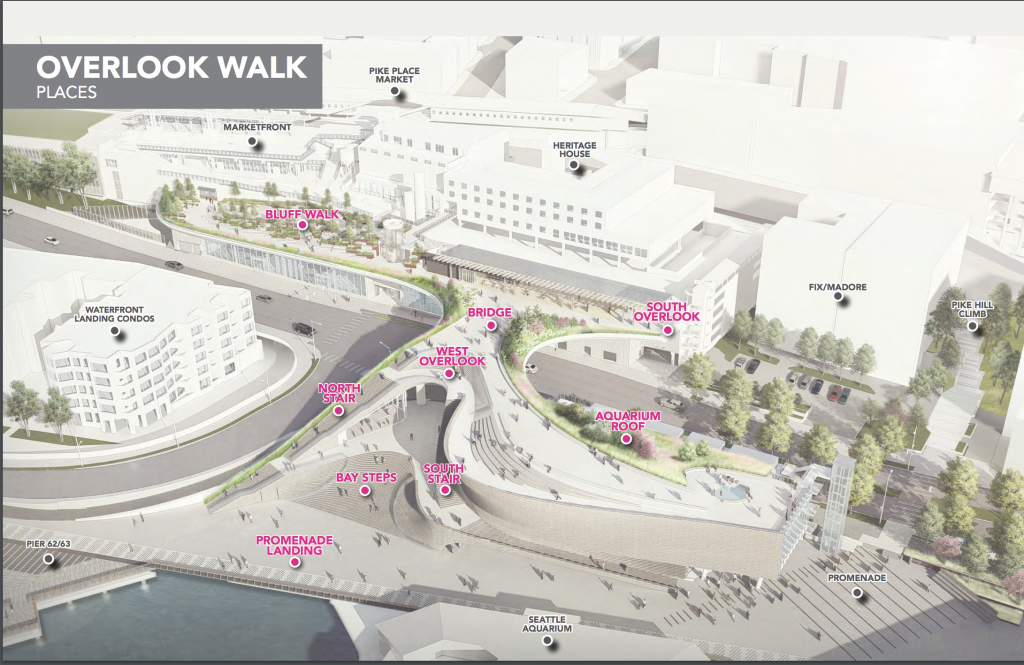 The concept shows several main elements including the upper Bluff Walk near the market, the Bridge over the new waterfront boulevard, and the Ocean Pavilion and new plaza at the waterfront. They are all woven together by the cascading walkway punctuated by a series of moments–places to hang out, sit and play, and enjoy that we live near beautiful open water and the view that provides us. 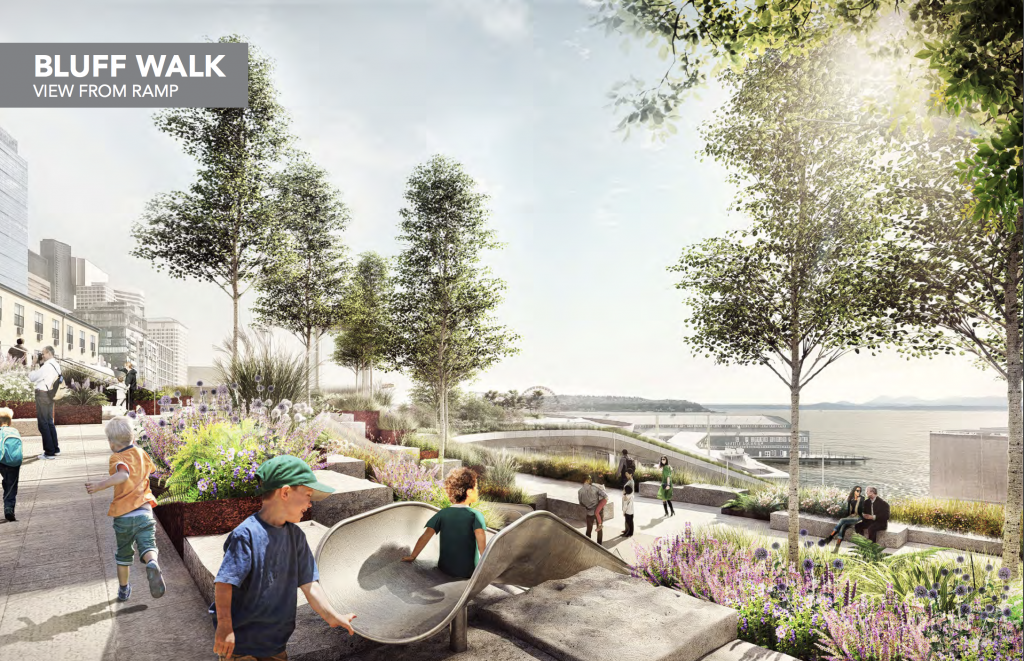 The bluff walk, bridge and walkway are all designed to be occupied and not just passed through. All the images show abundant seating and places to gather. One of the most compelling aspects is that a series of slides are provided in an effort to create a more kid-friendly and playful space. This project is far bigger than a walkway–the Overlook Walk and Ocean Pavilion along with the adjacent piers 62/63 and waterfront park will be nine acres of new and reimagined pedestrian open space. Downtown is gaining residents (including people with children) at a rapid pace as new towers open and they will need park space. Hopefully the waterfront can provide it. 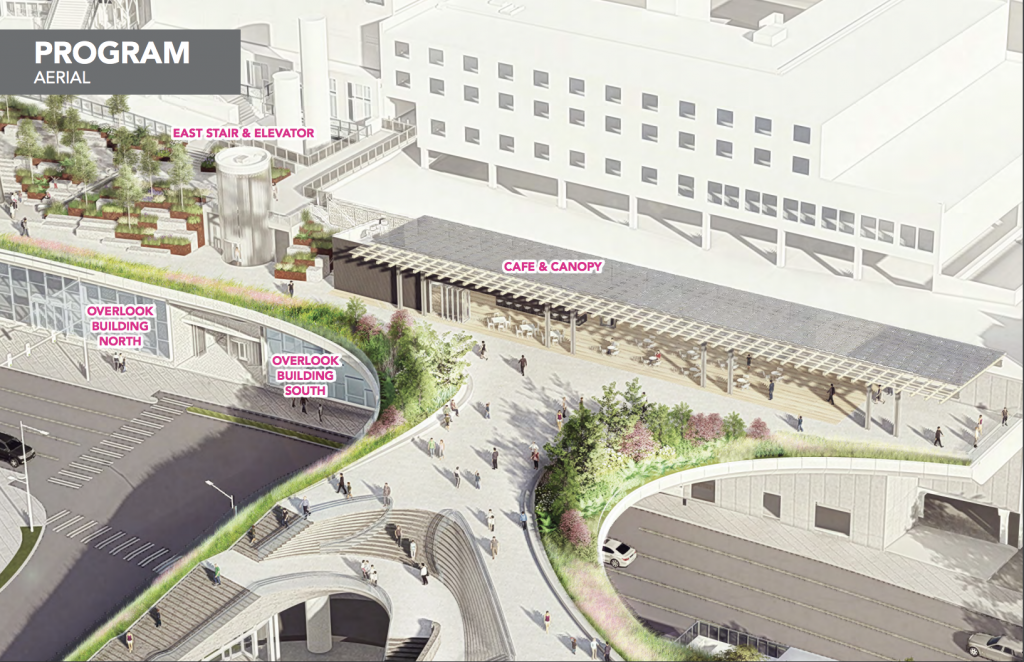 A new building will be added along the walk with retail and other uses. Part of it will be along the walk in the form of a cafe and part of it will form the base of the walk and provide retail along the new waterfront boulevard. One of my architecture professors said the key to successful public space is food and drinks. People will linger and enjoy a space more with a snack and that is surely the intent of adding this small cafe and canopy covered seating. 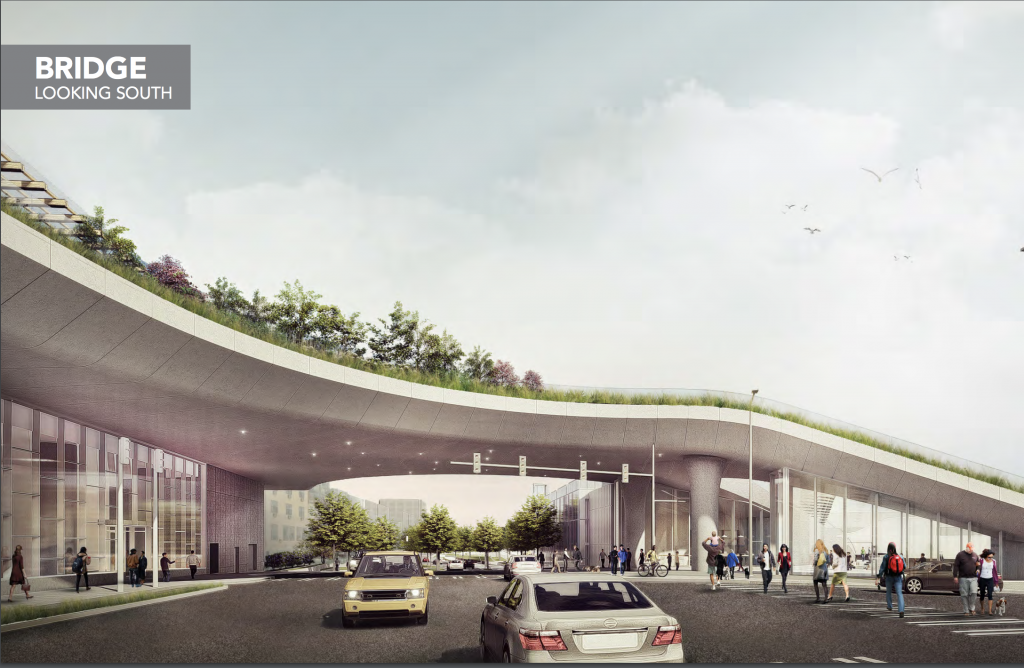 The walk will create a land bridge over the waterfront boulevard. Some urbanists are concerned that what was originally promised to be a more pedestrian and connected waterfront will still be walled off by a new multi-lane street full of buses and trucks. Activists are working to ensure this does not happen, but if the new arterial is as bad as some fear, the bridge will enable a direct and car free connection between the market and the waterfront. The rendering also show it as more of a heavily vegetated land bridge or aerial park like The Highline in Manhattan than a utilitarian pedestrian bridge. 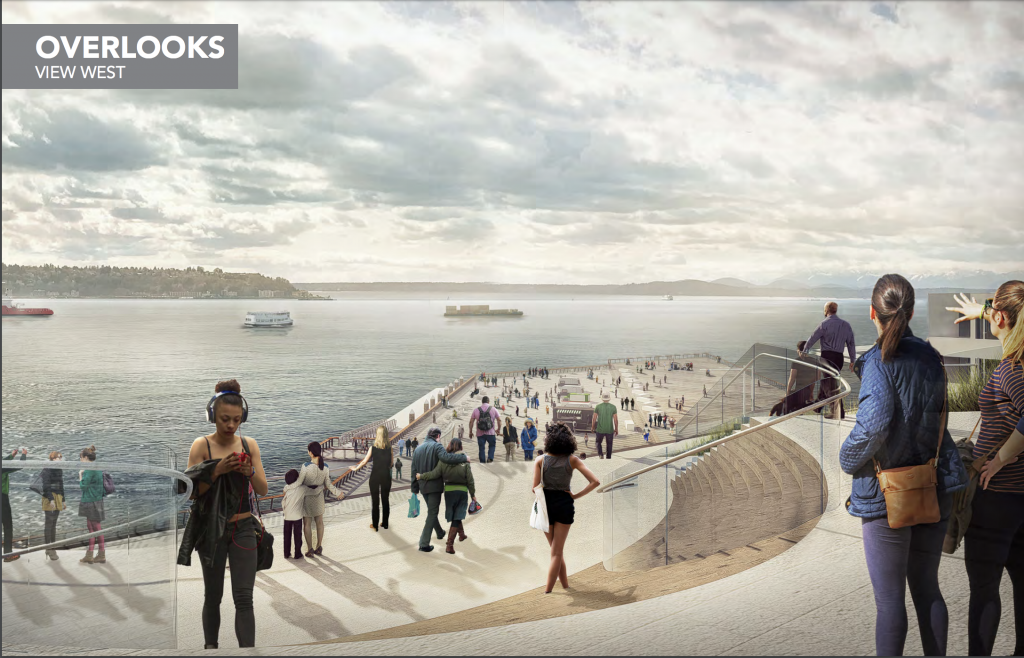 The removal of the viaduct will create new views throughout downtown. This project seem like it was designed with the idea of accentuating the new opportunities for appreciate the beauty that surrounds us. The design packet has many images of vistas from the various landings and framed perspectives of the water from within the new structures. The real power of the whole waterfront rebuild is to connect us to the larger environment around us both visually through these new opportunities to look out and through the addition of areas where people can experience the waterfront, such as the proposed beach and the currently-on-hold swim barge. 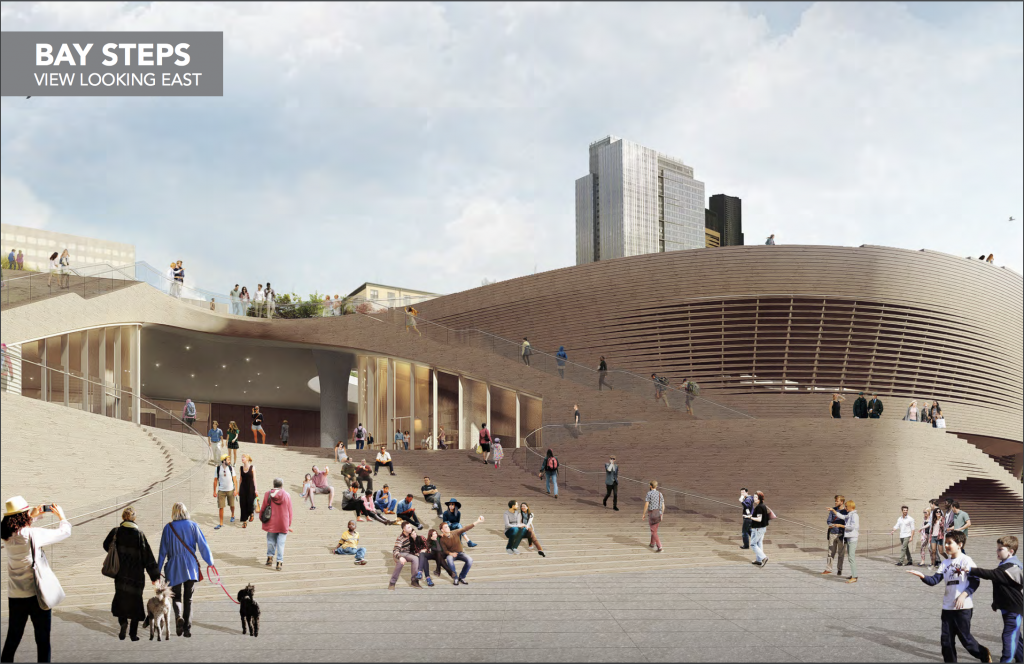 The new Ocean Pavilion aspires to be a new icon on the Seattle waterfront, while at the same time attempting to straddle the line between a contextual response and providing a total break from the past. The material shown appears to be wood planks like those found throughout the waterfront and strong reference to our heritage as a logging and milling town. But the curvy forms and building as landscape organization is a radical departure from the stoic piers and old masonry warehouses that form the waterfront’s current vernacular. The Ocean Pavilion, to be designed by LMN architects, seem to look to LMN’s own project up north in the Vancouver Convention Center or to global starquitecture firm Snohetta’s Oslo Opera House. In both of those projects the designers seeks to meld the landscape and the building into one seem-less form. Both projects have been wildly successful (as public spaces and icons–I’m not sure how they function as a convention center and an opera house), winning many awards and become internationally recognized works of architecture and symbols for their respective cities. Let’s hope that the Ocean Pavilion can live up to that and help reimagine the Seattle waterfront.

This is an ongoing project. The images above are from what is considered the 30% design with the design completion target date of 2020 and an opening date of 2022. More information about this and all the other projects planned for our waterfront can be found at Waterfront Seattle.

Love it hate it or feel indifferent, share your thoughts about the waterfront redesign and Overlook Walk and the Ocean Pavilion in the comments below.