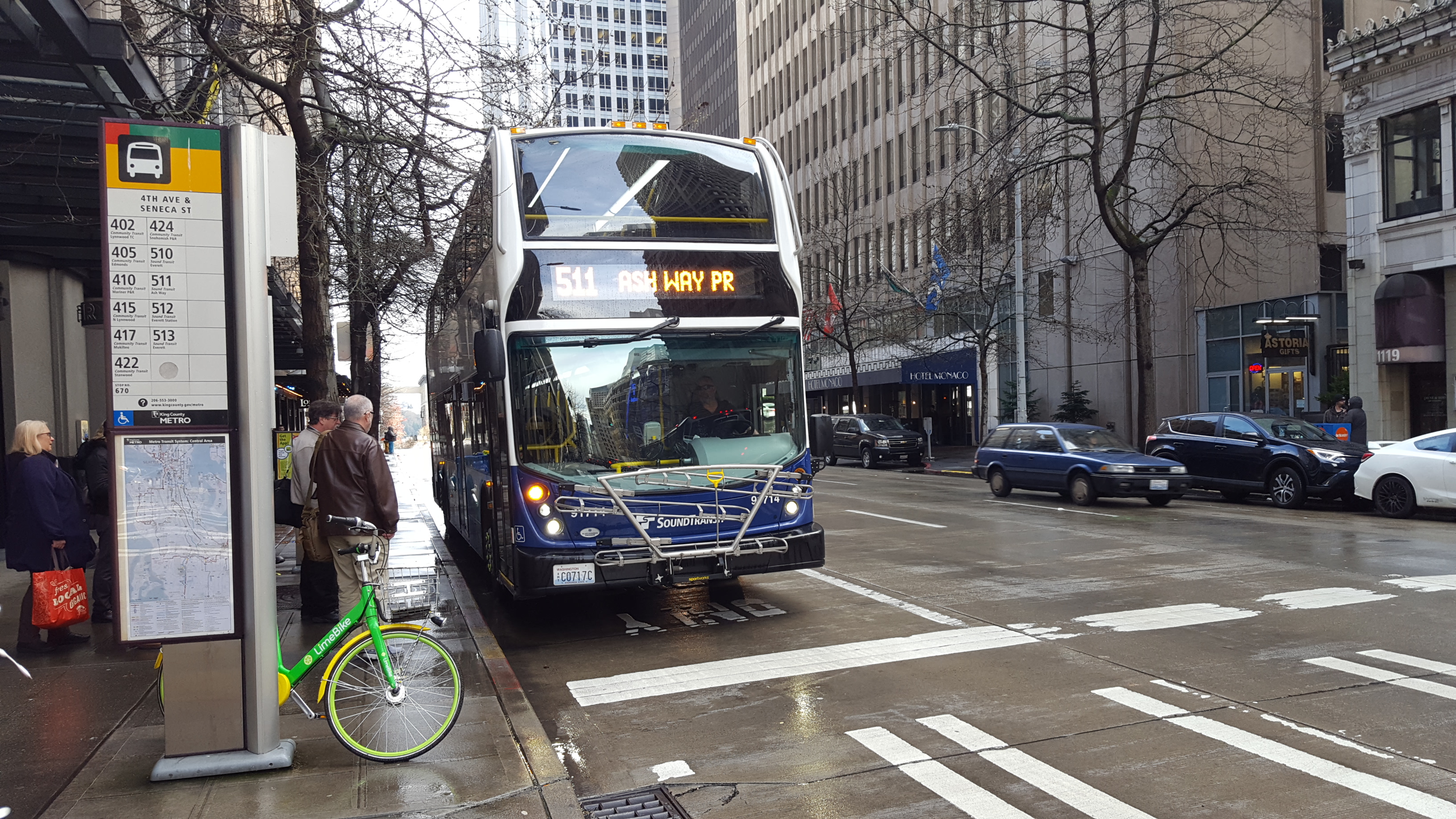 On Monday, the Seattle City Council approved the street and alley vacations requested by the Washington State Convention Center (WSCC) for its forthcoming $1.7 billion expansion. In the process, they accepted largest public benefits package in Seattle history, and cleared a key hurdle toward allowing the project to start construction. Negotiated outside the city process by a group of advocacy organizations called the Community Package Coalition, the public benefits totaled more than $83 million.

Failing to make it into the final bill was any language that would have required mitigation funding if city transportation officials determine downtown’s surface streets were not ready to accommodate the 40 buses per hour during peak that use the bus tunnel. The convention center expansion construction will require the closure of Convention Place station, requiring all buses to use surface streets instead, likely in March of 2019 if everything lines up like the WSCC intends. At the council’s Transportation and Sustainability committee meeting last week, Seattle Department of Transportation (SDOT) officials were not confident that they would be able to implement one of the signature projects intended to move those buses efficiently: the new 5th and 6th Avenue transit pathway. But it’s worth looking at what the city and other transit agencies have decided not to do to help move people through downtown.

For the past several years, regional transit agencies have been getting ready for these buses moving onto surface streets and how that will impact the regional transportation system as a whole. The One Center City process, a collaboration between SDOT, Sound Transit, King County Metro, and the Downtown Seattle Association, began in 2016 and created an entire advisory group made up of representatives from groups that move through downtown. The advisory group had its first meeting in fall of 2016 and met for an entire year, but most of the ideas that were presented to the board have been left on the cutting room floor.

The most dramatic change proposed was the concept of moving all bus routes from both 2nd and 4th Avenues onto a two-way transit mall on 5th Avenue that would be restricted to other traffic during peak hours. This would cost the transit agencies nothing in additional operating costs because bus travel times would not increase, compared to all the other options, but would be expensive up front, costing up to $30 million dollars. It ultimately didn’t happen because that cost could not be justified for a transit mall that might be obsolete after Northgate Link opens, but also likely because businesses along 5th Avenue were not on board with the idea.

Another option to keep buses moving would have added a bus lane to 5th Avenue, where there currently is not one, and where buses like the 545 slog through peak hour traffic, and an additional bus lane to 4th Avenue, allowing buses in the existing lane to leapfrog one another. But this option had the biggest projected impact on travel times for general purpose vehicles heading southbound, an estimated impact of 3.4 additional minutes per vehicle due to the subtraction of a general purpose lane on 5th. The double bus lane was also not found to impact bus travel times enough to justify itself. It also would have cost up to $17 million to install these improvements.

One of the first ideas that was proposed was improving Montlake triangle to speed up bus transfers there, allowing buses that currently use SR-520 and go all the way downtown to instead transfer riders to and from the University of Washington station. The documentation suggested that this would save riders three minutes if heading to the vicinity of Westlake Station and five minutes if heading to the International District, compared to what expected bus times will be in 2019 with additional buses on surface streets. 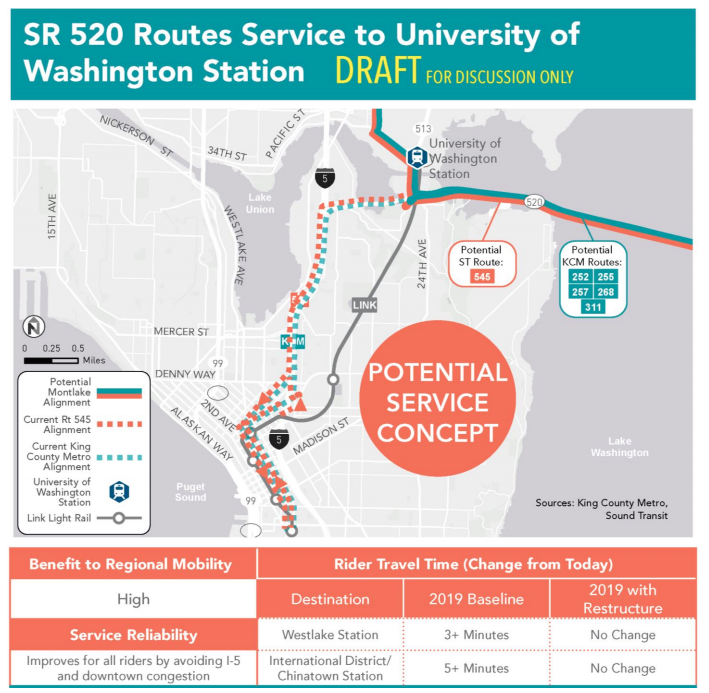 As the Seattle Transit Blog reported last month, Sound Transit and Metro are choosing not to reroute any 520 buses except for the 255 to Kirkland, and even that route will not be ready to reroute until September of next year, six months after buses exit the tunnel.

One idea that is moving forward but which SDOT is not sure it will be able to implement in time for the March 2019 deadline is the 5th Avenue/6th Avenue pathway, which would extend the contraflow bus lane on 5th Avenue north to Marion Street where bus lane on 6th Avenue would continue northbound. This will take several northbound buses off 4th Avenue, but SDOT still needs to get the OK from the Washington State Department of Transportation (WSDOT) as the new bus lanes will pass several WSDOT ramps.

Another idea that never gained much traction was restricting general purpose vehicles turning right off 4th Avenue at some of the streets that buses use. Turning vehicles are one of the main reasons that the 4th Avenue gets slowed down, and the improvements proposed on 4th Avenue will simply add right turn arrows for both general purpose vehicles and buses. This will impact travel times for pedestrians along the corridor and not separate buses from traffic at all.

One of the best improvements to come out of the process will be all-door boarding on 3rd Avenue, which will also require extensive electrical work to be completed by next spring, another heavy lift. All-door boarding is another thing that the city has been talking about for a very long time, so it’s perplexing to see the agencies scramble to complete this by the deadline. And, of course, we are still very afraid of restricting random cars from driving on 3rd Avenue, so instead we will likely continue the policy of encouraging drivers to make turns in front of buses, slowing them down and putting pedestrians in the crosshairs. (And the state legislature has been no help on camera enforcement of transit lanes as Republicans and suburban-minded Democrats teams up to kill a pilot bill.)

With less than a year before buses exit the downtown tunnel and our into our limited street space downtown, the fact that we are rushing toward being ready for it reflects the reality that we won’t be asking people who drive their personal vehicles downtown to use less space. Except for a limited new bus lane on an underutilized stretch of downtown street space, the geometry of downtown Seattle for the average driver won’t change. Travel times for bus riders will be the first thing to suffer as a result. How will we implement decongestion pricing if we can’t even find space for our buses?