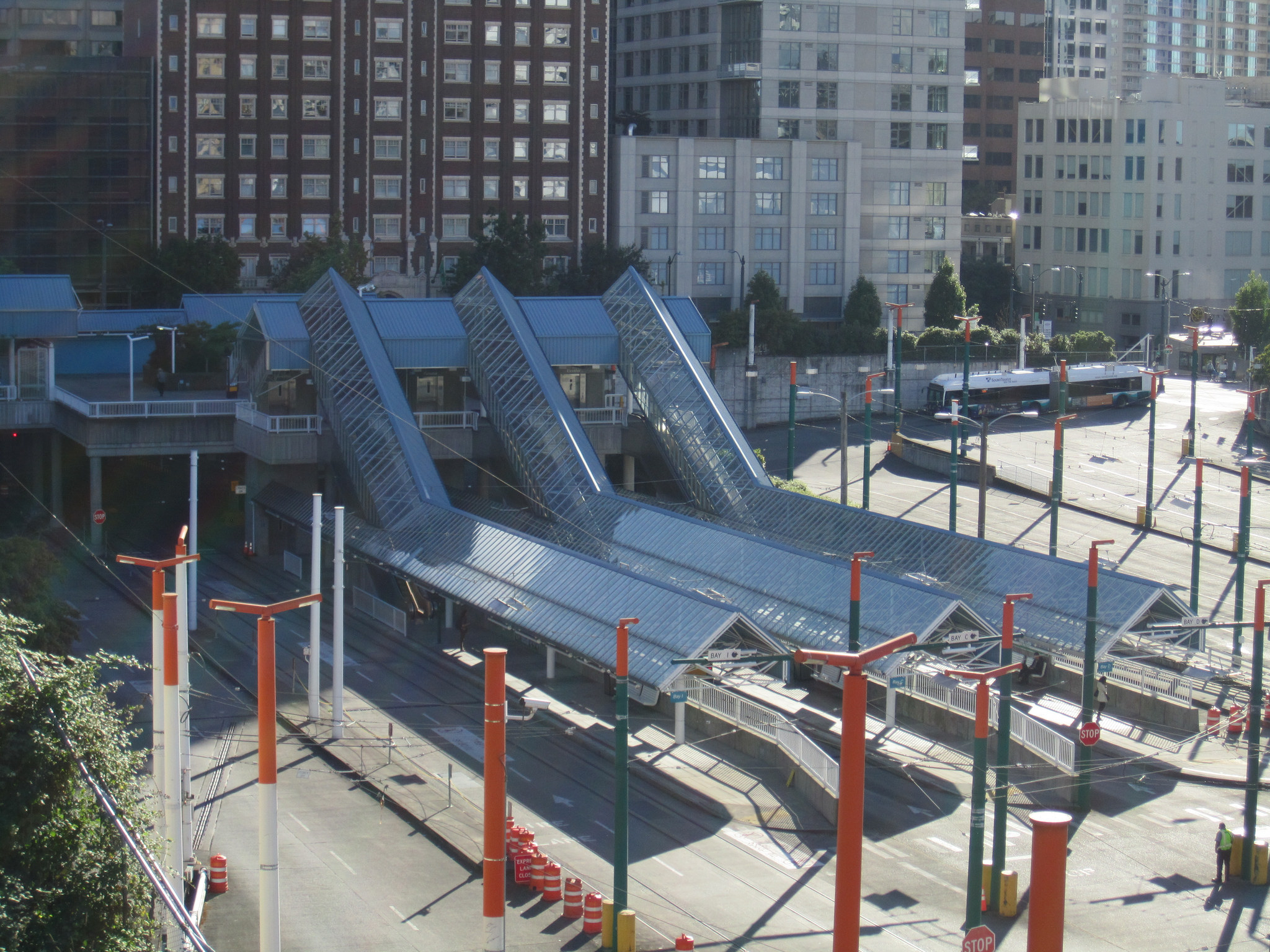 On Monday, the King County Council voted unanimously to sell the land that is home to Convention Place Station. Convention Place will make way for a $1.7 billion addition doubling the size of the Washington State Convention Center (WSCC), as The Urbanist has covered extensively before. While few doubted the county council would approve the sale, the timing of doing so was a major question–one with major impacts for what our downtown transit environment looks like over the next few years.

One Center City–a joint working group comprised of leaders at the Seattle Department of Transportation (SDOT), King County Metro, Sound Transit, and the Downtown Seattle Association–made a number of assumptions that limited their planning process. One of the biggest ones was that in September of next year, buses would no longer be able to access Convention Place Station, and by extension the entire transit tunnel. That would mean that 570 buses per day would have to find a spot on surface streets.

But with Monday’s vote by the King County Council, we now know that the earliest buses will be exiting the Downtown Seattle Transit Tunnel will be March of 2019, with a date of September of 2019 much more likely, as the City of Seattle would have to approve all of the permits by July 1st of next year in order to allow the March date to happen. We should take the extra time and come up with the best plan that we’re able to execute.

Losing a valuable frequent transit corridor through downtown just as Seattle gets ready to build a streetcar on First Avenue, and demolish our waterfront highway viaduct puts our transportation leaders on the spot: will they make room for transit downtown at the expense of general purpose traffic?

They were tasked with coming up with solutions to this impending problem. A number of options to increase throughput of transit vehicles downtown after the closure of Convention Place were released to the pubic in January of this year. These ranged from common-sense options, like switching to all-door boarding and off-board payment at all buses on Third Avenue so that street can move more buses, to bolder ones. The most radical proposal was the conversion of the entirety of Fifth Avenue through downtown into a two-way bus mall closed to general purpose traffic during peak hours.

Just this past month, the One Center City stakeholders presented the options that were being taken off the table, and there the Fifth Avenue transit mall idea seemed to meet its end. There just wasn’t enough time to design, plan, and implement such a major capital improvement downtown, they said. But that was before the King County Council bought the process essentially what could be an extra year of planning time. The stakeholder group did agree to move forward with converting Sixth Avenue to two-way operations, a street that currently carries zero buses.

At last week’s Growing Seattle transportation forum, every single candidate for Mayor of Seattle said they supported making Fifth Avenue bus-only during peak hours. With the caveat that many may not have been briefed on the specifics of the plan, it is pretty striking that there was such unanimity among the candidates and such silence coming from the current dwellers of city hall’s 7th floor.

The alternatives being presented to allocating more transit space downtown are disappointing. Those who choose to take transit should not be punished with a truncated route, long walk to a transfer, and a packed Link train when people driving downtown are not sacrificing any additional street space. It is time to ask our region’s leaders to take another look at how we allocate street space downtown. If they decide that a Fifth Avenue transit mall is truly not feasible, then we must push for alternative plans to keep transit moving. Additional bus lanes on Fourth and Fifth Avenues seem like clear solutions that appear to have been taken off the table because they would delay general traffic by too much. Doing the bare minimum is no longer an option.