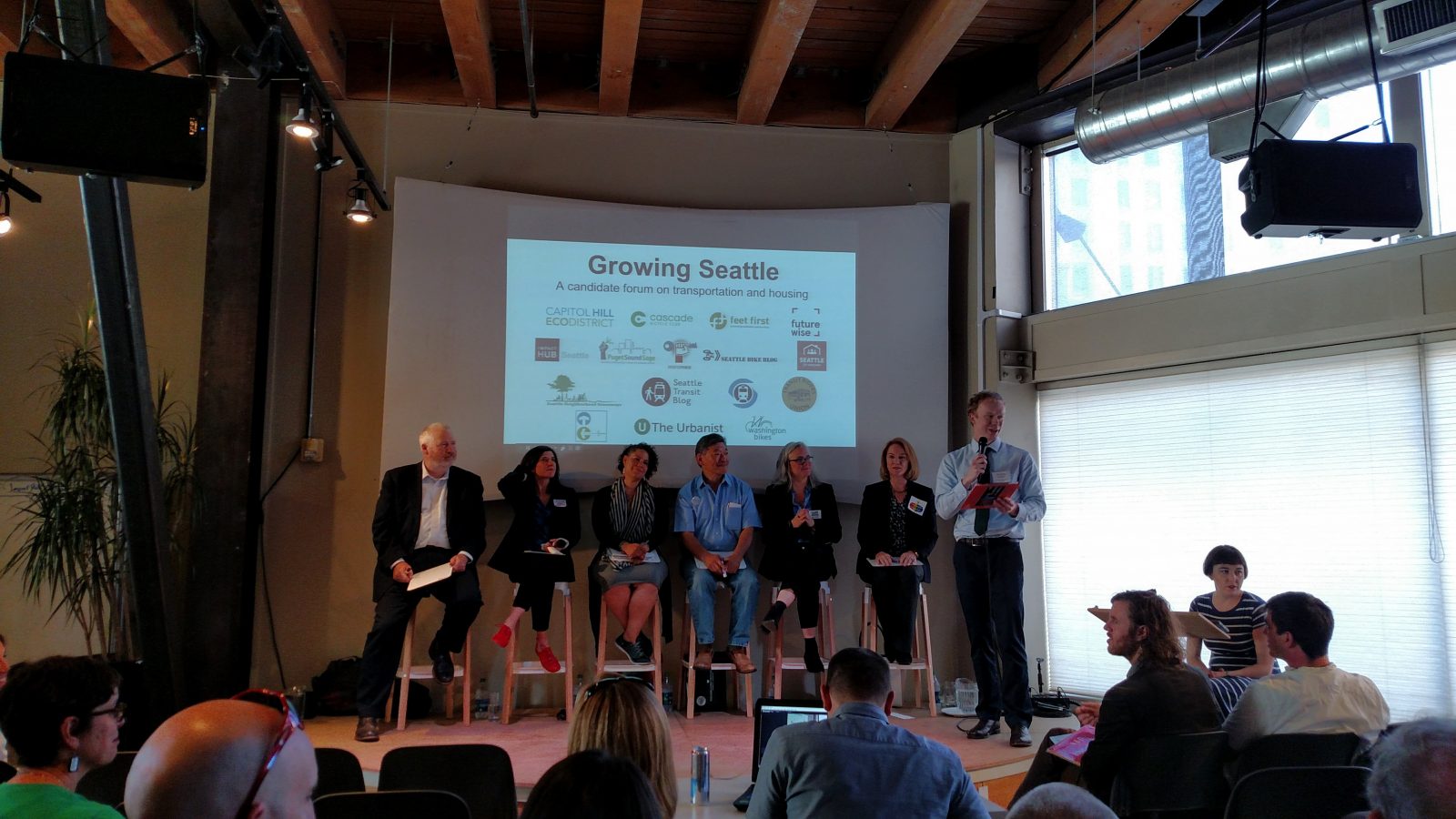 The Urbanist was part of a coalition of organizations that hosted a candidate forum Thursday evening focused on transportation and land use. The six leading mayoral candidates participated as did six of the most prominent contenders to replace retiring Councilmember Tim Burgess, in at-large District 8. The mayoral video is posted below for those interested in watching, while the city council video is partway through this article.

The forum offered an excellent glimpse at how candidates think about mobility and housing. Here are some things that stood out.

In both the mayoral and council seat 8 forum, the candidates indicated they support allowing missing middle housing types like triplexes and backyard cottages in single-family zones. They differed on implementation. State Senator Bob Hasegawa, for example, said he’d hand control over to neighborhood councils to decide where density goes in their respective neighborhoods. It’s hard to see that leading to an equitable process or distribution of growth. Making changes happen in single-family zones is going to require backbone, as Mayor Ed Murray backing down on the issue back in 2015 demonstrated.

Moon hit on lowering speeds everywhere with street design (not just speed limit signs), funding Vision Zero to make it real, and getting away from Level of Service (LoS) for cars to focus on safety and transit access as a more important metric. Go to the 43-minute mark to hear her full answer.

Most of the candidates said the Washington State Convention Center (WSCC) should provide a larger public benefit package for its proposed expansion, which would replace Convention Place Station and cost $1.7 billion in taxpayer dollars. McGinn and Oliver went a step further and said they oppose the project. Oliver emphasized public land should be put to better use–housing comes to mind.

During a written round, (about 30 minutes into the video) candidates were asked to rank their mode priorities among transit, bicyclists, pedestrians and cars. McGinn gave the “right” answer relative to most multimodal advocacy, and Moon was very close (just flipping transit and bicyclists). Jenny Durkan on the other end put pedestrians at the bottom of her prioritization, perhaps raising questions about how she’d handle Vision Zero implementation even though she did raise some good ideas like “we have to think about people walking” during the Vision Zero question. Ultimately, if you’re not willing to lower the primacy of cars, it’s hard to create change or stem the tide of traffic deaths. State Senator Hasegawa also ran afoul of the pyramid putting cars ahead of pedestrians and bicyclists.

State Senator Bob Hasegawa was roasted for once comparing light rail to dog poop. He’s recently tried to soften his stance saying he carried out the Sound Transit plan as mayor. However, his skepticism still came through at the forum. Hasegawa tried to suggest making transit free across the system would create more transit ridership than ST3 will, citing some study he saw. Unfortunately, he relied on something close to Sound Transit’s average daily ridership of 66,203 in 2016 rather than the full ST3 build out that is projected to put Sound Transit past 600,000 daily riders. Oops!

Mosqueda gave a nod to an innovative idea out of Barcelona, which we covered here, to implement pedestrian superblocks. Barcelona’s idea is to take nine blocks and limiting car access to the perimeter to allow the interior streets to flourish and become a more pleasant place for people walking, biking, lounging and playing. Imagine the placemaking!

Unfortunately the Fifth Avenue transit mall has been removed from consideration in the One Center City process attempting to avoid transit apocalypse when buses come out of the Downtown Seattle Transit Tunnel. Nonetheless, all the city council candidates at the forum support the idea of adding transit only at peak lanes on Fifth Avenue to speed buses through congested downtown streets. Perhaps the idea can be implemented down the road if our leaders execute the vision they proclaim.

All candidates support making 5th Ave transit only during peak. Let's do it @seattledot!

Nelson is moderate on some issues but, when it comes to traffic lights, she indicated strong interest in eliminating right-turn-on-red for motorists, which would decrease conflicts with pedestrians and ultimately save lives.

Playing to the room very effectively, Sheley Secrest said the Seattle Department of Transportation should listen to street safety activists like Andres Salomon, who was first to declare against Mayor Ed Murray, but dropped out due the torrent of candidates after Mayor Murray exited the race.

Hisam Goueli (D8) perhaps more succinctly than anybody emphasized that density is a requisite for frequent transit, which he stressed was a key factor in getting people out of their cars. A neighborhood with a population density of 12 people per acre (or 7,680 per square mile) can generate enough ridership to support bus transit with 30-minute frequency all day, Goueli said. If you double that density to 24 per acre (or 15,360 per square mile) then you can support transit with 15-minute headways. 12 people per acre is what you’d expect in a single-family neighborhood. 24 people per acre effectively requires different zoning; detached single-family with no accessory dwelling units can’t get you there. Thanks to Goueli for pointing out this tough truth for those who want great transit and to keep their single-family zoning, too.

Addendum: Thanks to Erica C. Barnett of the C Is For Crank for great moderating and for crafting excellent questions. She supports her hard-hitting independent journalism via donations to her Patreon page.