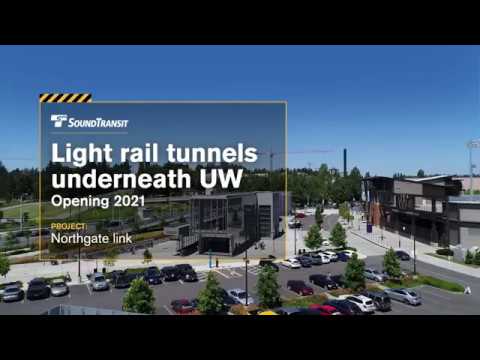 Construction on the Northgate Link extension is moving ahead on-time and under budget. Sound Transit reports that the project is about $52 million under budget (total budget is approximately $1.9 billion) for a 4.3-mile extension of light rail opening in fall 2021. Most of the extension will be located within tunnels between stations in Northgate and University of Washington.

Tunnel boring on the extension wrapped up more than a year ago. Construction on 23 cross passages, electrical, communications, and safety infrastructure within the tunnels then followed. Sound Transit reports that that intensive process was completed late last year. Work has now pivoted to building rails in the tunnels.

Sound Transit will use a special technique for rail construction underneath the University of Washington campus. Rails will be situated upon what might be considered “floating slabs” and are made out a concrete and iron oxide material called “hematite.” This mixture results in a very dense material that lacks magnetism. A total of 1,618 these floating slabs will be built into the tunnels stretching about 7,400 feet and sit atop rubber pads, according to Sound Transit’s Bruce Gray.

This unique approach will reduce vibration, noise, and magnetic impacts that light rail can cause when operate. The University of Washington specifically requested that Sound Transit address these impacts so as to protect the integrity of delicate research work in dozens of buildings and laboratories on the campus. The alternative to this would have been forcing expensive and disruptive moves.

The floating slabs are currently being cast in Woodland, Wahsington. These should begin being transported to Seattle in the coming months for installation.

Sound Transit has produced a video highlighting the path of the Northgate Link tunnel giving a bird’s eye view of what’s directly above:

If all continues to go according to plan, Sound Transit expects to open the extension to the public in September 2021. The latest agency progress report indicates that the total project float is remaining steady at 154 days, which means that an earlier opening is conceivable–as early as late April in 2021. However, any number of critical tasks could cause that project float to contract and dash any homes of an earlier start date.