With the Seattle Department of Transportation (SDOT) working to implement safety improvements on NE 65th St between Ravenna Boulevard and 20th Ave NE in 2018, the department has modified some of the designs revealed last year to respond to issues raised by advocates. In an email sent Wednesday to those involved in the project, SDOT listed concerns and how they have addressed them through design changes. But in some cases, the modified design may actually make the plans less safe.

The email update states that SDOT will be “piloting” an alternate design for transit stops along NE 65th St, only between Ravenna Boulevard and 12th Ave NE. Instead of space for a transit island, bus riders would enter and exit buses directly from the bike lane, and queue for the bus behind the bike lane. They included a design that is meant “for illustrative purposes only” that cites the National Association of City Transportation Officials (NACTO) as the source for the design.

Initially, as we reported in December, the design for the street at transit stops reduces the width of the sidewalk to four feet in order to accommodate space on the street for protected bike lane, transit island, and an entire lane for vehicles to pass stopped buses. This is in contrast with other streets in Seattle with similar designs, like Dexter Avenue N, where vehicles cannot pass stopped buses. In addition, the bike lane was planned to be four feet, below even the five minimum width specified by NACTO. Moreover, NACTO recommends seven foot bike lanes in areas with high bicycle ridership. NE 65th St will be the primary corridor connecting much of Northeast Seattle to the Roosevelt light rail station opening in 2021. 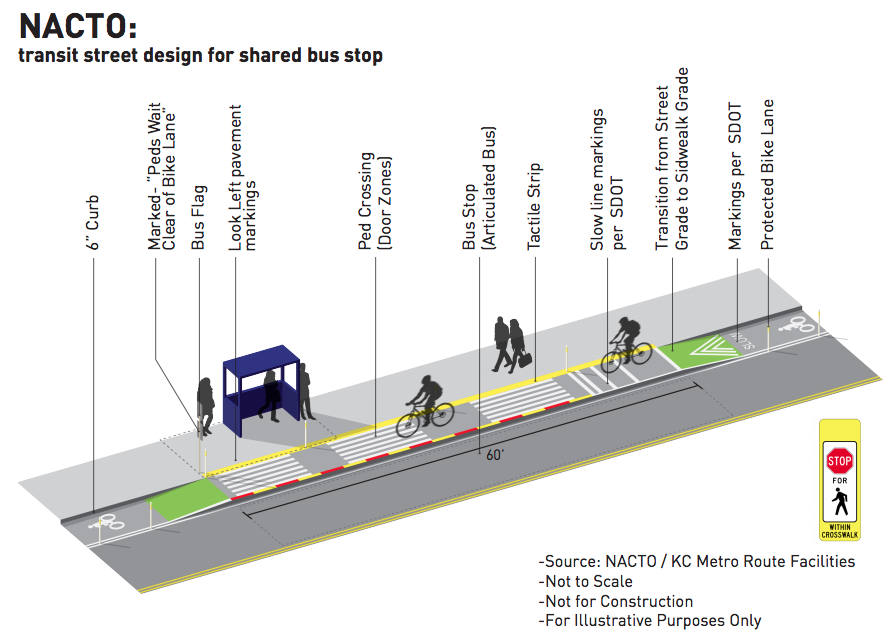 SDOT admits the new design relies on users being on their best behavior in the email:

The design includes an 11-foot sidewalk next to a 5-foot bike lane, both at an elevated grade. Busses stop outside of the protected bike lane, in-lane with traffic, and passengers will cross the bike lane and load onto the bus. People getting off the bus cross the bike lane to get to the sidewalk. While this strategy provides more continuous space for people walking and waiting for buses, it relies on people biking to slow and stop for people getting on or off the bus.

The improvements and bus stops between Roosevelt Way NE and 12th Ave NE are part of a long-term, phased approach in coordination with Sound Transit that extends beyond the scope of this project. The interim design includes buses pulling to the curb and merging with the bike lane for loading and unloading. Implementation of a permanent design will coincide with the Link station opening.

The official NACTO page for this design notes that “[s]hared cycle track stops are an important retrofit option for constrained transit streets with in-lane stops, especially of streetcars, if a boarding island configuration does not fit in either the street or the sidewalk.”  In earlier designs, SDOT calls the bus stops near Roosevelt station “in-lane” but includes a left turn lane for eastbound traffic, allowing some passing to occur.

Merging bus loading space with a key segment of the bike network is clearly a recipe for disaster. The design has never before been implemented in Seattle and inherently leads to conflict between users of different modes and difficulties for people with mobility challenges. How would blind users navigate this design? Will people waiting for a bus leave room for the bike lane or queue up in it? Since the first step a person exiting the bus makes is into the bike lane, it will require cyclists to be vigilant. In some ways the updated design may be worse than the constrained sidewalk layout before in that the purposes of each section were clearly delineated from one another.

On the subject of a lack of additional NE 65th St crosswalks, which many advocates have cited as a major issue with the design, SDOT confirms that they are citing low pedestrian volumes attempting to cross a fast-moving arterial with two de facto car lanes as the reason that they will not be adding crossings:

We understand safe arterial crossings are fundamental elements of a pedestrian network, but our traffic studies revealed that pedestrian volumes are currently under the threshold for adding new marked crosswalks and existing crosswalks are well-spaced in the corridor. We don’t plan to include additional marked crosswalks as part of this project but that does not preclude future improvements in the area as new development shapes the neighborhood. We’ll refresh striping at existing marked crosswalks to improve crosswalk visibility.

The project is zooming ahead toward construction, which SDOT says is currently scheduled to start in either this spring or summer, with completion estimated at this fall. As I have stated before, the designs on NE 65th St are not setting the corridor up for multimodal success. The design will fail to be the access point that the city is going to demand when Roosevelt Station opens in just a few years.

SDOT’s email for this project is NE65VisionZero@seattle.gov if you’d like to submit feedback on this final stage of design.