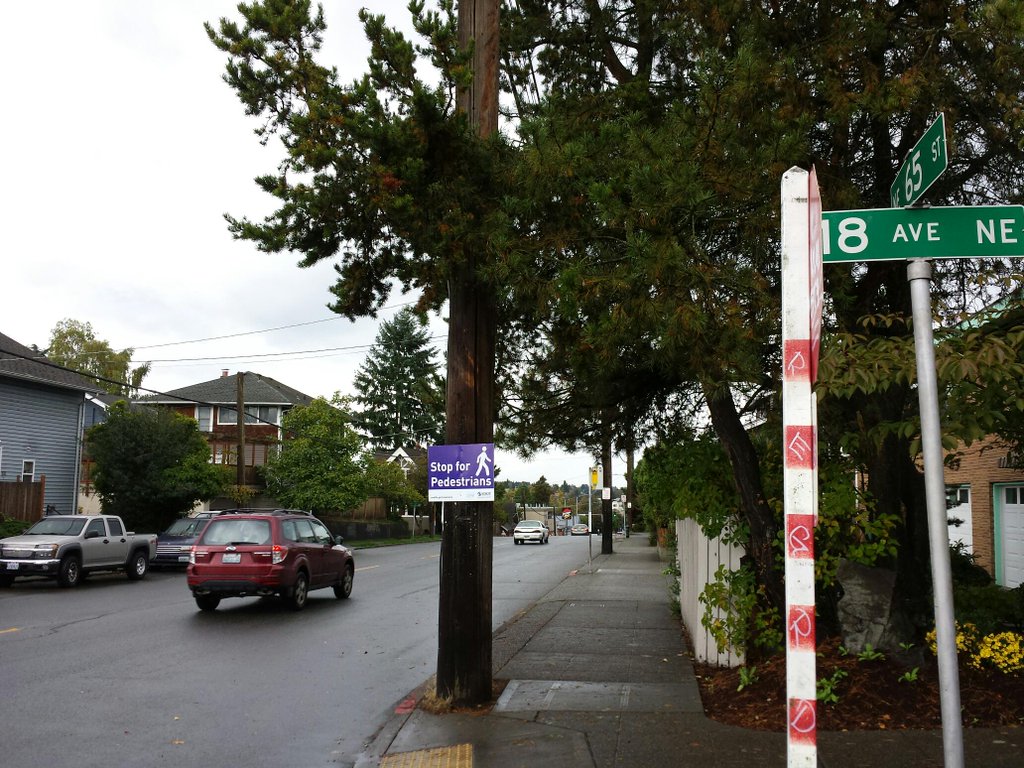 On November 26th, volunteers with Seattle’s most active street safety organization, Seattle Neighborhood Greenways, criss-crossed the city, stopping at sites along our streets where collisions within the past year had led to someone’s death. Somberly they placed white silhouettes marking the spots and bearing the age of the person who was killed and how they were using the street when the collision occurred.

Northeast Seattle’s representative on the City Council, Rob Johnson, attended a gathering dedicated to remembering lives lost along NE 65th St, a corridor that has had an unusually high number of collisions in recent decades, many of them leading to serious injuries and several tragic lives lost within the past few years.

The corridor has gotten a lot of attention, mainly due to an outspoken group that has galvanized attention around the #fix65th label and pushed the city to commit to taking action. Because this is such a high-profile street redesign, it has the potential to represent a model for how these safety-focused street overhauls happen in the future.

Earlier this year, we looked at the different designs for each segment that had been approved by the Seattle Department of Transportation (SDOT) from the alternatives presented to the public.

The primary segment of NE 65th St will have protected bike lanes on both sides of the street, with one travel lane in each direction and a center turn lane. This is very similar to the configuration of NE 75th St after a 2014 rechannelization on a short stretch, which did lead to reductions in traffic speed and collisions.

One difference is SDOT plans to add transit islands will to bus stops so that buses do not need to enter the bike lane. In order to leave enough road space to accommodate a stopped bus at transit stops and a travel lane to allow vehicles to pass buses, the design calls for the removal of planting strips next to bus stops and for narrowing sidewalks as well.

SDOT has completed 60% design and we now have a better idea of exactly what NE 65th St will look like: sidewalks will be four feet wide, next to a four-foot wide bike lane.

Seattle’s right-of-way improvement manual doesn’t recommend sidewalk widths below six feet in any area of the city, and recommends eight-foot minimum width in pedestrian-designated zones, which in the case of NE 65th St  from 9th Ave NE to 15th Ave NE. Four-foot sidewalks are literally the minimum size required by ADA requirements–a very low bar. It bears mentioning that in 2021, a Sound Transit light rail station will open at NE 65th St and 12th Ave NE–the street will become an even more major transfer point. Sound Transit estimates daily ridership at 8,000 people in 2030, most of whom will arrive via transit, walking, or biking. Pedestrian travel between Roosevelt and Ravenna/Bryant will increase, and four-foot bottlenecking sidewalks will prompt people to walk in the bike lane. It will be hard to argue that that’s not by design.

As I wrote about in my last post on NE 65th St, no changes are being considered for the corridor east of 20th Ave NE. When I spoke to Councilmember Johnson, he told me that the segment is slated to be repaved in the next few years and that changes could be considered to the segment later. However, the collision data doesn’t support ending the Vision Zero project at 20th Ave NE. There have been a number of pedestrian and bike collisions east of there in recent years, and speed is just as much an issue there as further west.

SDOT is also working with King County Metro Transit to consolidate and relocate bus stops along the corridor. The stop removals will, in some ways, compensate for the out-of-lane bus stops, where bus operators will have to wait for traffic to clear to merge back into the lane. But it’s worth noting that there will be no westbound bus stops between 15th Ave NE and Ravenna Ave NE. Eastbound the maximum distance between a bus stop is a little shorter. The bus stop consolidations around Roosevelt Way NE and 12th Ave NE will set up bus operators for a seamless transfer when the station opens in 2021, however.

And then there’s the issue of pedestrian crossings. In a survey conducted by SDOT, 53% of respondents said that they were either very or somewhat unsatisfied with the quantity and/or quality of pedestrian crossings across NE 65th St. 57% of respondents said they felt either very or somewhat unsafe walking along or crossing NE 65th St on either a bike or on foot. Nonetheless, plans do not currently include any additional crosswalks along the corridor: that means the only place where a crosswalk will be provided, after all of these changes are implemented, between 12th Ave NE and 20th Ave NE will be at 15th Ave NE. After that, the next crosswalk is at 25th Ave NE.

Oralea White, a board member with the Ravenna-Bryant Community Association (RBCA), told me that she thinks that the plans leave a lot to be desired for pedestrians, and do not take into account current behavior, where people are unable to cross the street at unmarked crosswalks where traffic does not stop. “Let’s look at how our neighbors use the road to get where they need to go and help them do it safely,” she said. “RBCA’s Mobility Assessment Survey demonstrated that folks do not feel safe walking around the neighborhood but they’d walk more if they felt safer doing so. While there are huge improvements coming to NE 65th Street, I don’t see that SDOT’s plan goes far enough in addressing pedestrian safety.”

White posted a video to Twitter showing pedestrians trying to cross 65th St at 21st Ave during a morning commute:

As SDOT heads toward starting construction on this project next year, it’s worthwhile to step back and look at how this corridor’s future is being realized: some improvements will improve safety, but space for vehicles to pass buses and not stop at intersections is coming at the expense of people walking, biking, and taking transit.

Tonight (December 12th) from 5pm to 7pm and Thursday (December 14th) from 7am to 9am at Broadcast Coffee (6515 Roosevelt Way NE), SDOT is hosting drop-in sessions to discuss the project. A consensus seems to be growing that SDOT needs to go back to the drawing board and propose changes to NE 65th St that take the long term needs of a light-rail-oriented neighborhood into consideration, rather than focusing only on the needs of the people driving.