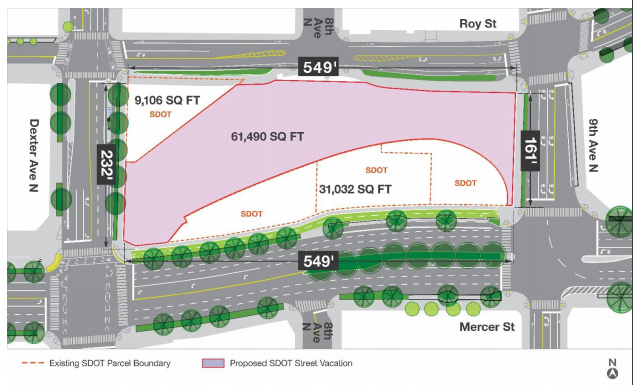 On Monday, the Seattle City Council met for their regular legislative agenda meeting. Key decisions were made on short-term vacation rental regulations, conditional right-of-way vacation and future surplus of property in South Lake Union, and agreements with Sound Transit to facilitate development of light rail projects.

Two last-minute amendments were adopted to the legislation that:

Councilmember Sally Bagshaw sponsored the first amendment in an effort to constrain the number of short-term vacation rentals in more residential areas of Downtown, such as Belltown, Pioneer Square, and Chinatown-International District. The amendment also removed South Lake Union and Uptown from the large operator grandfathering-in provision.

Councilmembers Mike O’Brien and Lisa Herbold sponsored a separate amendment to specify recovery costs associated with implementation and regulation of short-term vacation rental platforms like Airbnb. The director of the Department Finance and Administrative Services will be required to adjust fees accordingly to ensure that the full regulatory costs are recouped by the city. The fee structure will be mixed with a per night fee (nights a rental occurs) and graduated annual fee based upon number of listings by an operator on a specific platform.

For small operators of one or two units, the limitations will have little or no affect on their ability to rent out their spaces. Larger operators, however, may face a more difficult choice: selling their extra units or renting them out to long-term tenants. The practical effect could be an overall increase of long-term housing or at least stemming the tide of long-term housing conversion to short-term vacation rentals. A very real pitfall though could be jobs associated with large operators that may have to downsize or dissolve.

The regulations will go into effect on January 1, 2019, in addition to health and safety standards, land use regulations, and special taxes.

The city council signed off on a revised Transit Way Agreement with Sound Transit. The revised Transit Way Agreement formally adds the approximate location of stations, light rail facilities, and right-of-way for the Lynnwood Link Extension north of Northgate. This will allow Sound Transit to construct and operate light rail along that segment in Seattle. The existing Transit Way Agreement already identifies existing and planned facilitates and operations for the Central Link, University Link, Northgate Link, and East Link segments. The Lynnwood Link Extension will primarily be located within right-of-way owned by the state (I-5) with few exceptions. A future station on the segment will be added in Seattle at N 130th St and second one just beyond the city limits at NE 145th St.

A major piece of right-of-way from the old Broad Street extension in South Lake Union will be vacated, creating a new parcel of land. The city council granted conditional approval of vacation of the right-of-way. The right-of-way is no longer necessary since the Mercer Street corridor project has been completed east of Seattle Center. The street vacation is situated in the middle of four other city-owned parcels between the blocks for Dexter Ave N, Roy St, 9th Ave N, and Mercer St. The combined site will equate to approximately 104,777 square feet of developable area.

Vacation of the right-of-way will facilitate greater development capacity and public benefits than no vacation. A 2013 appraisal valued the full site, including the vacated Broad Street right-of-way, at $37 million, which was more than twice the value of the parcels in absence of the vacation.

Future development of the site will be subject to several requirements, including:

The new 60-foot wide right-of-way will need to be consistent with both the South Lake Union Urban Design Framework and design guidelines applicable to 8th Ave N. The vacation also stipulates that at least 11,000 square feet of the right-of-way would need to be dedicated to public open space and clearly signed as such. Adjoining property owners would be required to maintain and regularly activate the space and the design of the space would be overseen by the Seattle Design Commission prior to final approval and construction. The cost to the future developer is estimated between $400,000 and $700,000.

Separately, SDOT will be on the hook to develop a streetscape concept plan for 8th Ave N (north of Mercer St) and Aloha St as well as a transit hub on 7th Ave N between Harrison St and Thomas St. SDOT has already installed protected bike lane on 9th Ave N between Mercer St and Westlake Ave N where it meets the Westlake Cycletrack.

The site is zoned SM-SLU 175/85-280 allowing a broad mix of uses and buildings up to 280 feet in some cases. SDOT considered several options of the right-of-way, including a no vacation option. Notable in all of the development scenarios is the impact that the Lake Union Seaport Flight Corridor has on maximum building heights, even nudging down heights on the north portion of the block where towers could be located.

Under a no vacation scenario, redevelopment of the properties would have been significantly constrained by both site conditions and land use regulations. Approximately 370,000 square feet could be developed for a mix of uses, including open space:

With right-of-way, the block could achieve much greater development capacity, including as much as 880,500 square feet of private and public uses:

Under a slightly difference scenario, lower development capacity could be achieved on the site with a vacation but still substantially more than under the no vacation scenario:

A request for proposal (RFP) is intended to be issued early next year for the combined development site, in addition to another city-owned property (620 Aurora Ave N) to the west between Dexter Ave N and Aurora Ave N. But prior to that, a final vacation ordinance will need to be passed by the city council. Later in the year, a decision will be made on development proposals submitted in response to the RFP and preferred developer will be selected.