The Seattle Department Transportation is moving forward on making significant changes to NE 65th Street in North Seattle after asking for feedback on several options this spring. We outlined the different options then, and encouraged the department to be bold and follow through on its vision to remake the corridor as a safe place for people to walk and bike. The resulting proposal, which will be constructed in late 2018 or early 2019, will represent a big improvement over current conditions but also reveals telling facts in the department’s approach to Vision Zero and creating multimodal streets out of car-centric spaces. 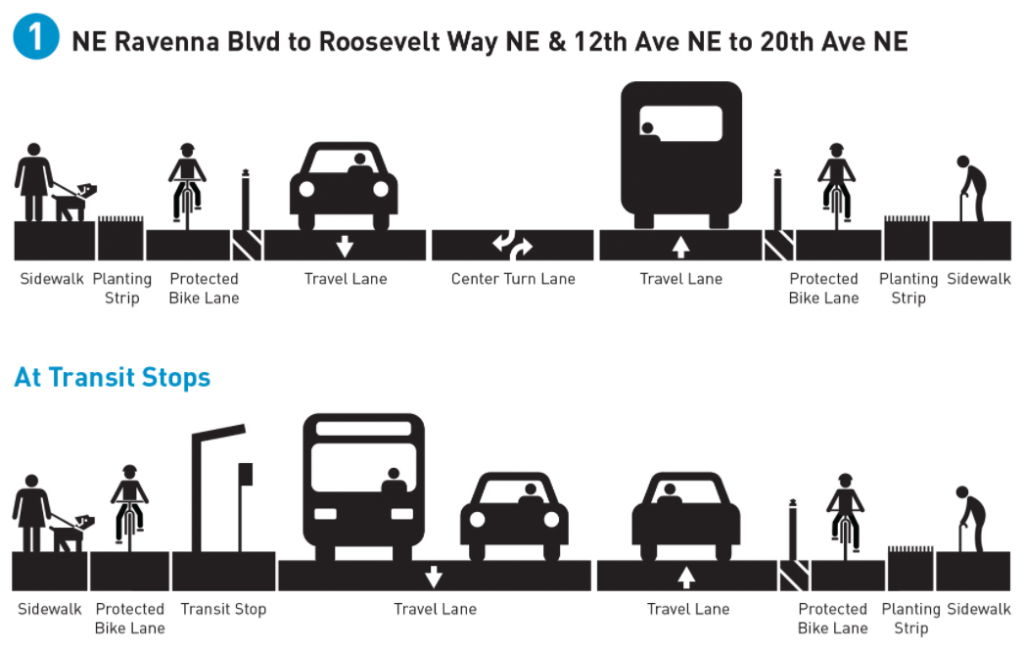 The design here mirrors the changes made to Rainier Ave S in Columbia City in 2015, except here we get bikes lanes instead of parking lanes. Currently 65th street only has a center median painted on the street in most places, with no turn lane and extra wide travel lanes. Even when drivers stop for pedestrians at an unsignalized intersection along 65th, there is a real danger of another driver passing the stopped vehicle and striking a pedestrian.

NE 65th Street is a major bus corridor: the route 62, 64, 72 and 74 all travel a significant portion of their routes on the street, with the 64 and 72 only running during peak periods, and the 45 also travels on 65th for a short period. Transit lanes were not proposed for the main segment, though we did toy with the idea in a post earlier this year, but what was on the table was a proposal for Dexter Avenue-style bus stops that stop directly in the travel lane. This saves buses from spending time trying to merge back into the single lane of traffic. In-lane bus stops paired with stop consolidation (reducing the number of stops along the route) should prevent any negative impact to transit speed.

In this case, the alternative selected will eliminate the center turn lane at bus stops to allow room for a vehicle to pass a stopped bus. Apart from adding possible delay due to the bus waiting to get back into traffic in order to avoid a collision, this also can create a danger for pedestrians crossing nearby. Again, with two ill-defined travel lanes, drivers will be more likely to pass vehicles stopped for a pedestrian, endangering that pedestrian. Thus, the crossings near bus stops will need to be designed to make people crossing more visible than they are now.

This plan also proposes to create the space for protected bike lanes, a transit island, and three travel lanes at bus stops by eliminating the planting strip between the bike lane and the sidewalk. Depending on how this is designed, it could lead to pedestrians walking in the bike lane, particularly in areas where the sidewalk is narrow. As I said in May, it’s incredible that we do not have enough space on a road as wide as 65th for the design we want without taking out a planting strip, but if that’s the case then so be it.

At the area around the under-construction light rail station at Roosevelt Way NE, there was an option on the table to provide transit lanes only between Roosevelt and 12th Ave. This would force people on bikes into the transit lane, and many would chose to use an already narrow sidewalk instead. This option was discarded, and the bike lanes will continue all the way between Ravenna Boulevard and 20th Ave NE. In this stretch, because the turn lane is required, buses will stop in the through travel lane.

At 20th Avenue NE, however, just outside Ravenna’s main business district, the protected bike lanes will terminate. The only change that will take place along the stretch from 20th to 39th Avenue is the parking lanes will be painted. The travel lanes will stay extra-wide, and where the parking lanes are empty drivers will drive in them. East of 25th Avenue, where there are few businesses, on-street parking utilization is unexpectedly low. Peak parking restrictions, ostensibly in place to ensure that peak-only buses can move more freely, will ironically be removed to encourage on-street parking to make the roadway safer. This is completely upside-down.

People on bikes will instead be routed to the parallel greenway on 68th Street. Riders trying to get to the business district will probably just end up using the sidewalk, I guess.

In addition, SDOT is only proposing intersection improvements at two intersections along 65th street, at 15th and at 20th, with no improvements east of 20th. While it’s true that a majority of collisions in the past five years have been west of 20th, there are still collisions east of 20th. There is a full signal at Ravenna Ave NE, and one at 25th Ave NE, but the only marked crosswalk between Ravenna and 35th Ave NE is at 32nd.

In the past five years, five cyclists have been hit on 65th Street east of 20th Avenue, and three pedestrians (one of those at 20th). The status quo is not acceptable east of 20th either. Keeping parking along a stretch where it will clearly be underutilized will not help safety.

Light rail is coming to Roosevelt and 65th Street in only a few years–and transit-oriented development along with it. The time to make changes to improve safety on 65th Street is now: on the entire corridor. Half a Vision Zero project is better than no project at all, I guess. Those who advocated to #fix65th, however, deserve better.

Read more about the full project at SDOT’s page.