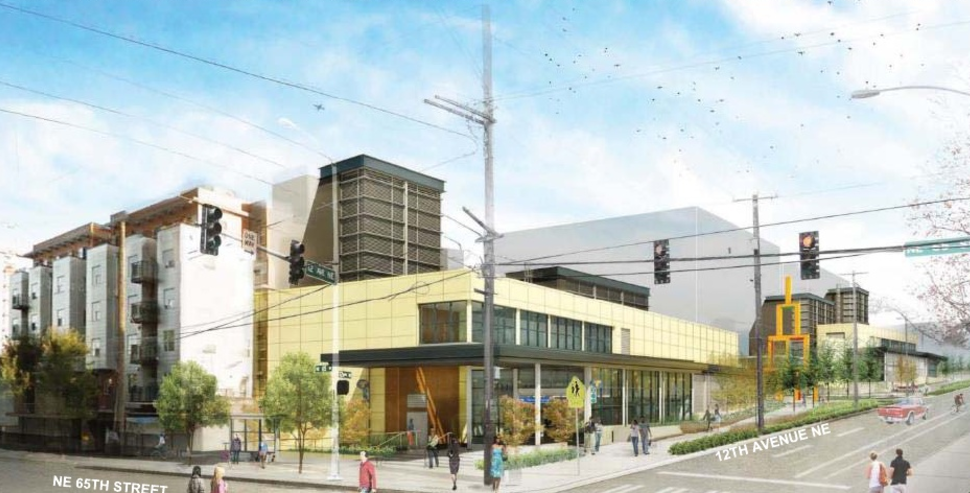 Sound Transit is earnestly constructing its light rail extension to Northgate, including a subway station in the Roosevelt neighborhood, that will open in 2021. Tunnel boring machines have already plowed through fully connecting the station to stations in Northgate, University District, and University of Washington. Much work remains to build the station itself, lay down track, and add other tunnel facilities for trains. As Sound Transit looks ahead, the agency is considering how surplus land and the station itself might be used through future development.

Early analysis indicates that up to 300 housing units could be developed across the three sites in addition to ground floor commercial uses, community and open spaces, and station facilities. The central site could be one or two buildings up to seven stories and contain underground parking. Sound Transit also is considering design that would include flexible ground floor retail uses at the central site. Possible retail approaches under consideration include a grocery store–a QFC once was on the site–or other large commercial space and small retail spaces, particularly on Roosevelt Way since visibility on the corridor is highest and better matches the retail pattern of the area.

Sound Transit also wants to explore certain objectives for the properties. These include topics like housing mix, a public space network, development densities, site accessibility and permeability, lighting, ground floor uses, environmental design, and other urban design considerations. Community input in these areas will be important to help Sound Transit suss out where to go in the next phase of the TOD program.

Development of the sites, however, are subject to some very specific zoning requirements–which could be adjusted in the near future. The central site is just over an acre in size with mixed-use zoning allowing buildings as tall as 85 feet and 6.0 floor area ratio (FAR) maximum. Sites to the north and south also have mixed-use zoning with less FAR allowances and differing maximum building heights. The 6,120-square foot north site could see buildings as tall as 65 feet with a 5.75 FAR while the smaller sliver south site (3,500 square feet) could see buildings as tall as 85 feet with a 5.75 FAR. The zoning appears to be inline with the aspirations of Sound Transit’s initial TOD concepts. To achieve the maximum FARs, a developer would have to use various incentive zoning provisions to get addition square footage, otherwise the FAR maximums noted in the diagram below would apply.

Rezones with the aforementioned M, M1, and M2 suffixes would unlock the MHA inclusionary housing requirements as outlined in the figure below for commercial and residential development. Roosevelt is considered as a “Medium Area” for the purposes of MHA requirements, meaning that the required affordable housing set-aside percentages and per square footage costs of the “Low Area” and “High Area” would not apply.

MHA, as proposed, would apply to most new development with some exceptions and is based upon the amount of residential and commercial uses proposed for a development project. For residential, it’s based upon the number of dwelling units proposed or total residential square footage. Commercial MHA requirements are solely based upon total commercial footage proposed. Developers will have a choice of developing on-site affordable housing as part of their project or paying an in-lieu fee to the City to develop affordable housing separately.

Future development of the Sound Transit TOD sites will likely be subject to MHA requirements, but some exemptions may apply if Sound Transit requires a developer to provide a high ratio of rent- or income-restrict dwelling units.

Sound Transit has provided an early mockup for TOD at the station by rendering the station under construction with massings of potential structures; it paints a partial picture of what might be possible if TOD is integrated.

To get detailed feedback about TOD priorities, Sound Transit has launched an online survey. The survey helps familiarize commenters on context for TOD, the sites, and process for developing a plan. Commenters are asked to rank their priorities for design, identify any missing principles, highlight community businesses and services that they want, and pick features that they think are important for public space. The survey also offers a variety of options for how housing should be delivered, whether targeted to families and seniors or homeless and youth.

The Roosevelt Neighborhood Association plans to hold three community workshops to discuss and plan how TOD might be provided at the station site. Those meetings will take place at Calvary Christian Assembly on January 25th, February 8th, and February 22nd. Sound Transit will hold its next Roosevelt TOD meeting on March 9th to show what they heard from community members on TOD priorities and strategies.