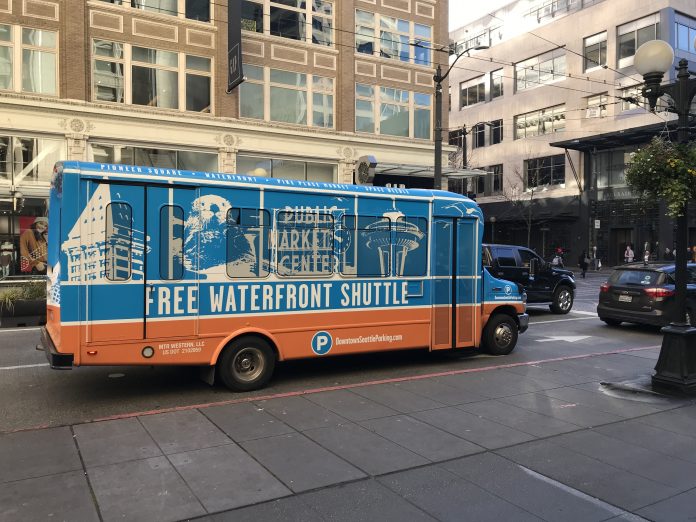 King County Metro wants to provide better transit service for the Seattle waterfront and Belltown, despite having curtailed service last year with elimination of Route 99. Prior to the inception of that route, the George Benson Waterfront Streetcar Line had long served Alaskan Way — and by extension the waterfront — until it was suspended because of demolition of its maintenance barn at the now Olympic Sculpture Park in 2005. Last year, a mid-term study was accepted by the county council to further develop strategies to bring back rubber-tire transit service by Metro.

“The First Avenue and Alaskan Way corridors in Downtown Seattle are each unique and in transition. Each can also be part of creating excellent new frequent transit connections,” said Bill Bryant, Managing Director of Service Development for Metro. “Alaskan Way is lined with distinctly Seattle destinations for locals and visitors alike, and First Avenue directly connects the Pioneer Square/stadium area with Pike Place, Belltown, and Seattle Center. As part of our waterfront study, we considered flexible options that could be implemented with or without the streetcar, and were intended to be complementary to the streetcar.”

In the interim, waterfront partners are helping to fund a free minibus circulator between Chinatown-International District and Belltown via the waterfront and Downtown. Initial reports by the Downtown Seattle Association indicate that more than 80,000 passengers have ridden minibus circulator since mid-July.

The study charts out three possible rubber-tire bus service options that could be deployed in 2021 or thereafter. Several factors are critical to any decisions, such as whether or not Center City Connector is built on First Avenue and completion of the SR-99 viaduct replacement.

Metro is considering a standalone battery bus route, alignment adjustments of Routes 1 and 14, and extension of Route 125 to more directly serve the waterfront. Naturally, all of these options have their tradeoffs.

If Metro pursues a new fixed electric battery bus, it would operate along Alaskan Way from Pioneer Square to the Olympic Sculpture Park with a possible extension to Seattle Center. The study identifies six stops along the waterfront: Marion Street, Spring Street, Pike Street, Bell Street, Vine Street, and Broad Street. This would help bring passengers to popular waterfront destinations like the aquarium, Pike Place Market, the piers, and the Colman Ferry Dock. Service would operate every 10 minutes. The route, however, would only partially provide service to the residential areas of Belltown uphill from the waterfront.

The service could be operated by Metro or another private partner. Initial cost estimates indicate that capital investments would top $6.3 million for seven electric battery buses ($900,000 a piece). Operating costs have not been disclosed since they could vary widely, depending on who operates the service.

Another option is to move the alignment of Routes 1 and 14. These routes normally operate as trolleybuses through Downtown Seattle, with Route 1 continuing to Uptown and Queen Anne and Route 14 to Judkins Park, Leschi, and Mount Baker. Moving these routes off of Third Avenue to First Avenue would require adding new overhead catenary wire. A small gap of First Avenue lacks overhead catenary wire between Broad Street and Virginia Street (a total of 0.6 miles).

Routes 1 and 14 currently operate every 15 minutes at peak hours and every 20 to 30 minutes at off-peak times. This frequency would likely be retained if the routes moved. Metro estimates that the new wire would cost somewhere between $1 million and $4 million to complete. The operational cost, however, would be marginal over today.

While this option provides better service for Belltown residents, a portion of the corridor would duplicate the First Hill and South Lake Union streetcar lines if the Center City Connector is built. That project would bridge the two streetcar lines along First Avenue from Stewart Street to S Jackson Street, providing long-term service there as frequent as every five minutes per direction. Another consideration is that Alaskan Way is largely a different market from First Avenue, which is partially why Route 99 bus in its last days did a poor job of attracting waterfront riders.

The third option that Metro is considering is extension of Route 125. The route currently terminates in the central business district, turning back at Seneca Street. The route used to operate further into the city center. Metro could choose to extend the route on First Avenue (the current path) or move it to Alaskan Way and extend it.

The latter option would more directly serve the waterfront, but may be an inconvenience to many riders who use it to access the heart of the city. Getting uptown to the central business district or other main activity centers would require a hike up the hill or a transfer. Light rail for West Seattle and southend riders will not arrive until 2030. So there is a clear issue for current constituent riders if the waterfront route is chosen. On the flipside, a route on First Avenue has the same duplicative nature of the Center City Connector as the option for Routes 1 and 14 does.

Under either option, service would be every 15 minutes during peak hours and every 20 to 30 minutes at off-peak times. Metro estimates that this service option would require an extra 3,400 annual service hours (equal to about $515,000) to support extension of Route 125. This also means that an extra bus may be needed to support longer total trip times. The total capital cost would amount to $750,000 for procurement of an extra bus.

The 2021 project completion goal is just a couple years away. Metro will have the next few years to further evaluate, refine, and decide on which option to pursue and then implement. But that also means that Metro will need to work with a broad set of stakeholders to further develop proposals. “Metro looks forward to working with public and private partners on a more transit-rich future as the larger waterfront projects are completed and the city’s First Avenue streetcar plan is finalized,” said Bryant.

The mobility needs for the waterfront and Belltown remain strong, but the service options for these areas are fraught with obvious tradeoffs and competing priorities. In the end, it will not be a slam dunk planning effort, but it will be worthwhile.