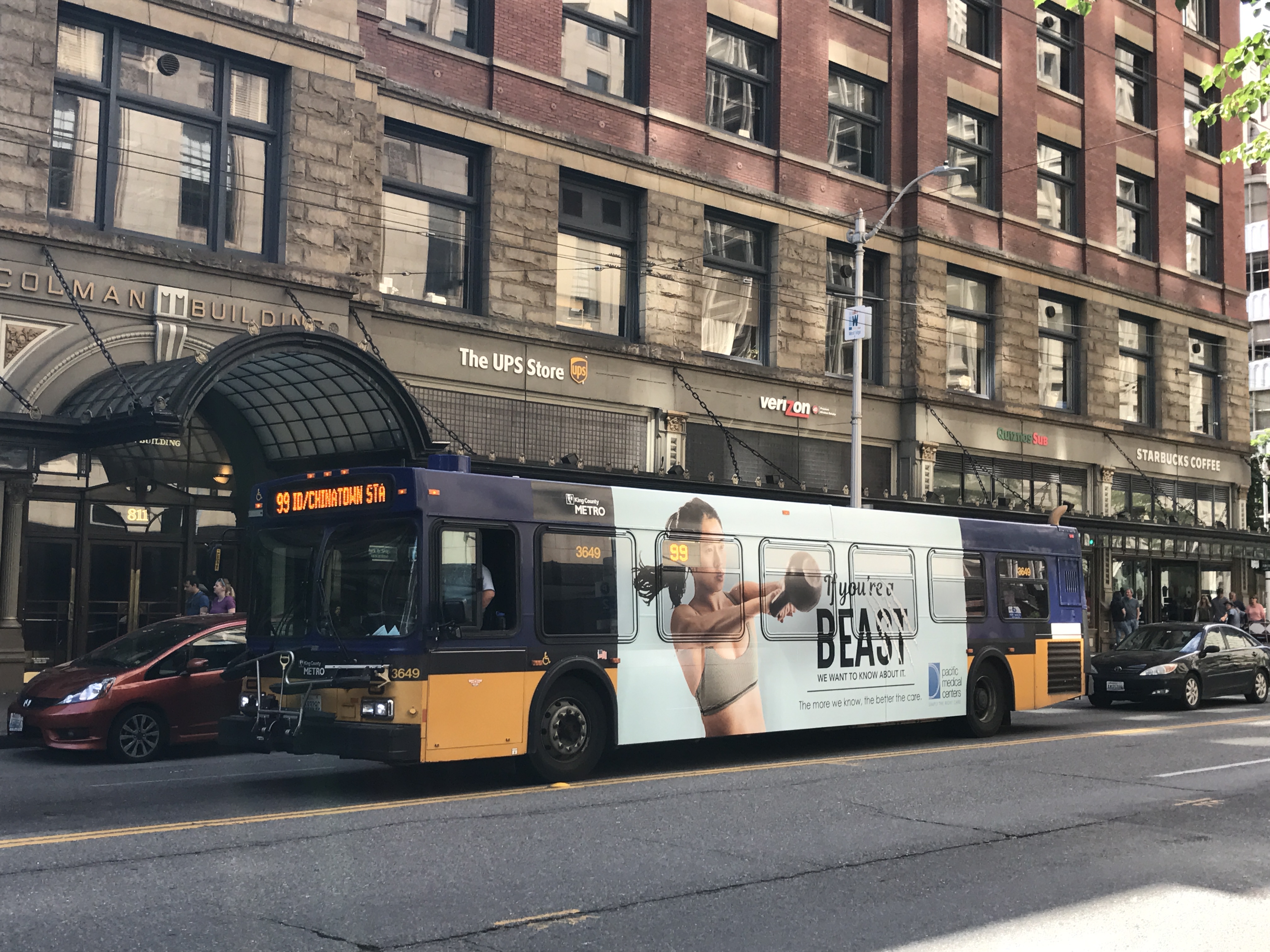 King County Metro may finally be putting Route 99 out to pasture. The long-beleaguered and much maligned bus line that replaced the George Benson Waterfront Streetcar line appears headed toward retirement in March. But before it does, it has one last stop to make. Metro is proposing to move the bus line from First Avenue to a couplet on Second and Third Avenues. The route change is being proposed in order to avoid construction impacts related to the Center City Connector, a streetcar corridor on First Avenue that will link the First Hill and South Lake Union Streetcar lines.

In a way, the route change is a bit of déjà vu because the 99 was instituted as a direct result of the George Benson line temporarily–and then permanently–being shut down due to construction of the Seattle Art Museum’s Olympic Sculpture Park (the streetcar barn, located on what is now sculpture park grounds was demolished and never replaced). Eventually, poor ridership on the streetcar’s-would-be replacement, coupled with construction related to the seawall and SR-99 tunnel projects, led to the route being pushed to First Avenue, first as a couplet with Alaskan Way and then finally to First entirely. And now with a new streetcar project–two blocks east and up a hill from the old waterfront line–the route once again finds itself moving, but this move will be its last.

The demise of the 99 is fairly ironic. The death of a streetcar gave way to its birth and now the birth of a new streetcar line will be its death.

Currently, the 99 has somewhat limited service. While it operates daily during the the summer with half-hourly frequencies all day long, it goes into near-hibernation the rest of the year with only peak-hour service on weekdays. Metro’s proposal entails sending the bus line northbound on Third Avenue and southbound on Second Avenue between S Jackson St and Broad Street. The northern tail of the route would be significantly modified to accommodate the overall routing change.

But the biggest change would be route elimination in March 2018–a full two years before the Center City Connector even gets going. Moving the 99 over to Second and Third Avenues is a way for Metro to wean 99 riders off of the bare-bones transit service that Metro provides on the corridor.

While the route consistently has struggled as a streetcar replacement, the waterfront deserves quality transit. Route 99’s eastward moves only leaves the waterfront as a less accessible place despite boasting major public and tourist attractions, significant employment, and even a substantial level of population. In fact, Seattle currently welcomes thousands of cruise ship visitors per year to Pier 66 and yet does not provide any bus service to avoid those passengers embarking on day trips in Seattle having to call a taxi or walk all the way Downtown to frequent transit. The future streetcar service on First Avenue may indeed prove to be successful in attracting Downtown riders, but it will do little as a stand-in for direct waterfront service. Ideas for a gondola to connect the waterfront with the rest of Downtown remain far off.

Remember, too, that a significant waterfront promenade and open space investment will be made by the city in short order. With this, new development will be spurred along it turning warehouses and destitute surface parking lots to lively and thriving places. The hard-to-service corridor, therefore, deserves a valuable transit connection to points north and south Downtown that do not require a hike up to First Avenue. It would be unwise to relegate local transit use to the most nimble.

Metro is taking public comment on its proposal through July 16th. Let them know that their proposal is misguided and that they should rethink how the waterfront could best be served by transit directly. The lack of bus service is one more reason we’re setting our new waterfront up for an auto-oriented future, but we can plan a new path.