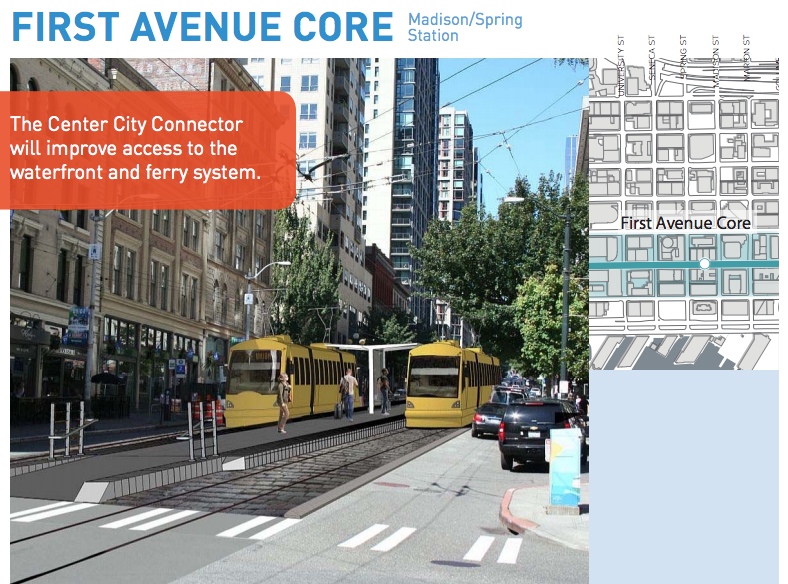 The long-awaited Center City Connector is finally moving forward to construction. The 1.25-mile streetcar project in Downtown Seattle will get underway in January with early construction. As the name suggests, the Center City Connector is meant to bridge the gap between the South Lake Union Streetcar (SLUS) and First Hill Streetcar (FHS) lines by providing exclusive streetcar right-of-way on First Avenue and Stewart Street. Four new stations will also be constructed with three on First Avenue and one on Stewart Street. Trains will criss-cross Downtown with arrivals coming every five minutes in each direction during peak hours.

The project is expected to cost $135 million with $75 million coming from federal grants. The remainder will come from City sources, including bonds, car tab fees, and utility bills. The long-term operating costs will stand at $15 million to run the whole streetcar system with half of the annual cost expected to be paid for by passenger fares while sponsorship and grants should cover the rest.

The Seattle Department of Transportation (SDOT) estimates that the entire streetcar system will serve 20,000 daily riders by 2020–more than doubling ridership from today. In 2035, daily ridership could reach about 35,000 passengers. SDOT’s ridership forecasting model suggests that ridership on the Center City Connector segment will be driven 60% by people arriving by foot and 40% connecting from other services (e.g., Metro local lines, Sounder, and Link).

Earlier this year, the First Hill Streetcar opened connecting Capitol Hill to Pioneer Square via First Hill, Yesler Terrace, and Little Saigon. Ridership on the 2.5-mile line is already beating 2030 projections with 3,300 daily riders. Its companion line in South Lake Union stretches from the Fred Hutchinson Cancer Research Center just north of South Lake Union to McGraw Square in Downtown. Much of the 1.3-mile South Lake Union Streetcar line travels along Westlake Avenue, though a couplet in the heart of South Lake Union splits it into two. Ridership on the line slightly nudges out that of FHS with 3,600 daily riders. Both lines benefit from major employment and housing nodes along their corridors.

Trains departing from the Fred Hutchinson Cancer Research Center will terminate in Chinatown and turn back while trains departing Capitol Hill will turn back on Republican Street in South Lake Union. Combined along the core Downtown segment, trains will arrive as frequent as every five minutes in both directions. Service on the other segments will be as frequent as every 10 minutes.

The Center City Connector will get significant priority on Downtown streets. Unlike the package of transit improvements that SDOT rolled out on Westlake Avenue earlier this year that focused on semi-exclusive transit lanes and no transit separation from other modes, the Center City Connector will be placed in the middle of the street with barriers from adjacent traffic lanes. SDOT will institute turn restrictions at many intersections, signal priority, and remove on-street parking impediments to keep trains moving. So long as the boxes at intersections aren’t getting blocked by cross traffic, trains should be able to proceed freely. SDOT has learned from many of the issues that FHS and SLUS alignments have suffered, which are largely the result of little or no exclusive lanes. The following diagram shows each of the priority and separation improvements that SDOT plans to make for the Center City Connector:

SDOT has also offered an early look at how stations, trackage, and the public realm could like once the Center City Connector has been constructed:

While an extension of the First Hill Streetcar is all but fully designed for Broadway, the business community along the proposed half-mile corridor expressed concern over the project earlier this month. Adding complexity to the alignment prospects are outstanding concerns from the bicycle advocacy community and the need for an addition $10 million to be raised for the $24 million extension.

The Center City Connector won’t just be a boon for transit riders. As we reported last year, attention to the pedestrian environment will be made through improvements:

Along with the reconstruction of First Avenue, attention will be focused on repairing the sidewalks and making any necessary ADA compliant changes while maintaining the unique look of the existing neighborhood.

The preliminary design calls for the installation of table-top intersections along First Avenue. This will involve raising the street surface at each intersection, except Pike Street, so to ensure they are level with the sidewalks. The design of raised intersections allows for easier crossing by pedestrians while dissuading vehicles from speeding through the corridor. The First Avenue and Pike Street intersection was excluded from this treatment because the City does not wish to harm the “charm” and “character” of the entrance to Pike Place Market.

Finally, pedestrian-scramble (all way walk) signal cycles are being considered at these locations to further improve pedestrian safety. These are similar to those at Pike Street and University Street.

On-street parking will largely be retained along First Avenue, but 144 parking stalls will be removed. Most of those stalls, however, aren’t available during peak hours, so the new restrictions likely won’t have much impact to motorists.

Many in the bicycle advocacy community have been concerned about the project, particularly because of the cobbles associated with some trackbeds and more tracks where bikes can get stuck leading to dangerous falls to the pavement. The bicycle advocates have also vocalized a need for SDOT to put particular attention to Stewart Street, which those riding north-south inevitably must cross in Downtown, but also could serve as a new northeast-southwest corridor. In response to widespread concerns, the Mayor formed a special group earlier this fall to look into bicycle safety and needs, ostensibly to further inform design and construction.

The project schedule has been slightly sped up. In the fall, SDOT had expected construction to begin in the second quarter of 2017, but the January groundbreaking is giving them a head-start. Early work will focus on segments near McGraw Square, Pike Place Market, and an intersection in South Lake Union. An emphasis will be placed on utility relocation before moving ahead with full-scale installation of tracks, catenary, stations, and roadway rechannelizations. Full wrap up of the project should occur in 2020 with a mid-year launch of revenue service.

A Streetcar Named Connector: A New Line In The Making