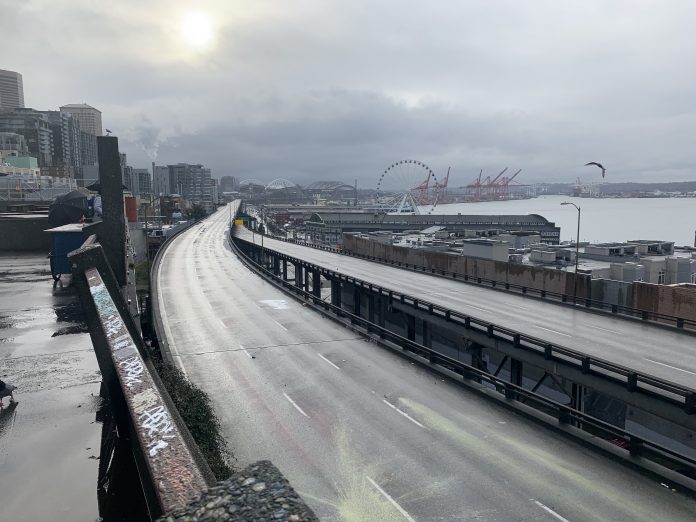 It feels significant that on the night before the Waterfront Seattle project received an important green light from the Seattle City Council, a wake was held by local public radio station KUOW for the Alaskan Way Viaduct, which carried SR-99. For almost 20 years, discussion of how to solve the problem of the viaduct has been held in tandem with conversations around what to do with the central waterfront.

The viaduct wake was a subdued affair. Supporters of the viaduct outnumbered critics, but the margins were tight. Even the viaduct’s most ardent supporter, a speaker whose father was a demolitions expert who denied the viaduct posed a safety risk and worked for decades to preserve it, acknowledged that the viaduct was sinking into the ground.

It was clear that for those who loved the viaduct what really mattered was the people and experiences they attached to their memories of the concrete structure. The viaduct itself was only backdrop. Mention of State Rep. Frank Chopp’s wildly ambitious, bizarre, and ultimately ill-fated scheme to build a Megaduct, affectionately known as the Choppway or Chopp-a-duct, elicited more laughs than claps. Ultimately, it appeared that even this crowd was ready to let the viaduct go.

The subdued atmosphere could even be extended to Viadoom, which seems to have officially earned the title of “Viadud.” So far the fairly negligible changes in traffic patterns have been attributed to the “disappearance” of the 90,000 cars which traveled daily on the viaduct.

The Washington State Department of Transportation is hoping the cars roar back to the tune of about 120,000 per day once the new SR-99 viaduct replacement tunnel opens, and it’s spending $4.4 million in ads to entice motorists. That way the ill-fated $4 billion project maybe won’t look so foolhardy.

Now the viaduct’s story is finally over and attention is shifting to Waterfront Seattle. In particular the City is finally getting greater clarity on whether or not it will be able to raise the funds necessary to pay for new public spaces, like the Overlook Walk, and environmental improvements, such as the incorporation of green stormwater infrastructure throughout the Main Corridor, which includes a surface street, pedestrian promenade, and cycletrack.

Waterfront Seattle’s story is by no means finished, but things are looking up for the project. The City was able to negotiate a new LID package with downtown landowners in December that decreases the contribution of the local improvement district from $200 million to $160 million. The funding gap will be covered by an additional $10 million from Friends of Waterfront Seattle and increased financial support from the City.

The ordinance to form the LID was formally approved by the Committee on Civic Development, Public Assets, and Native Communities, which is headed by Councilmember Debora Juarez. In a nod to the long process that led up to the approval of the LID ordinance, Juarez said, “I feel like I have been pregnant for three years.”

Earlier on in the session, Councilmember Sally Bagshaw reminded Councilmember Juarez that it was her “fifteenth year” working on the project. Councilmember Bagshaw, who is not running for reelection next year, has described herself as being on “ground zero” for the Waterfront Seattle.

In addition to representing downtown property owners in Council District 7, Bagshaw is also a resident of the LID area herself. “I am so happy to be here,” Bagshaw said. “But I have also taken many many meetings over the years with people who are not happy about the LID.” Those detractors have even included her next-door neighbors.

Nevertheless, Bagshaw stated publicly that she plans to vote yes in support of the LID. “I think it’s fair that I will be paying…whatever my share is,” Bagshaw said.

But even if the full city council does vote to form the LID ordinance, more hurdles will remain to be cleared. This includes a 30-day legal appeal period, as well as special benefits studies and public hearings on individual assessments that will go into late 2019 and even the first quarter of 2020.

All in all, while it looks promising that Waterfront Seattle will get the funding it needs to fully realize the project’s plans, uncertainty remains, and will remain for sometime.

However, for those of us who worried about what would happen to the viaduct in a Loma Prieta scale earthquake, the clock is finally ticking down. Viaduct demolition will begin in February 2019 in the waterfront.

Before it is reduced to rubble, WSDOT is offering its Step Forward weekend on February 2nd and 3rd, which includes a fun run on the viaduct and a tunnel walk. But don’t sweat it if you cannot make it to those events. The viaduct’s views will still be visible from the Pike Place Market Front and future Overlook Walk. Better yet, once the viaduct is gone, you will be able to appreciate those famous views from places without driving on a highway or staring out into a river of cars.