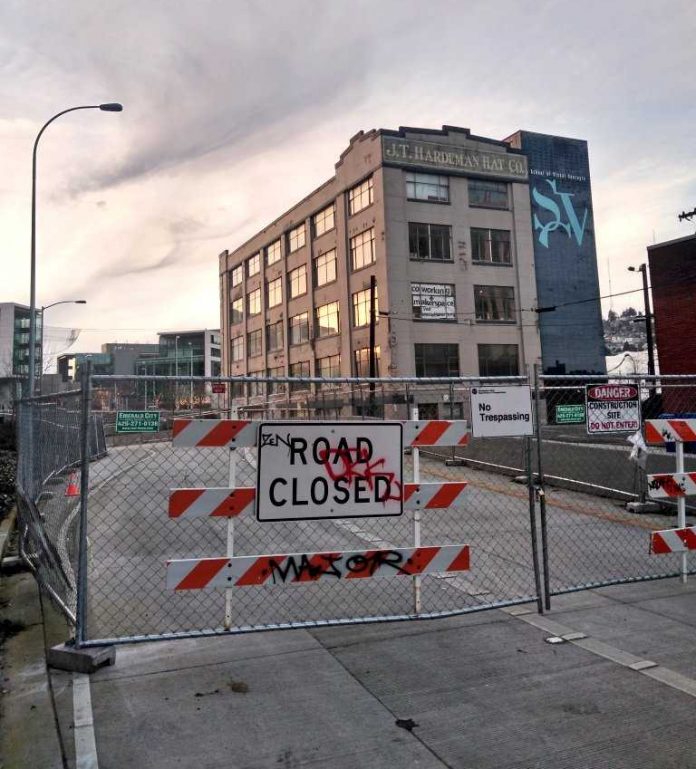 Next week, when the Washington State Department of Transportation (WSDOT) opens its new tunnel underneath downtown Seattle as a new SR-99, the northern exit from the tunnel will dump high levels of traffic onto one of the busiest bike routes in Seattle. And the situation will be compounded by the design of the intersection where tunnel traffic meets city streets–on a corridor that has seen serious injuries to cyclists in the past and where the City has not acted.

If you’re traveling northbound through the SR-99 tunnel and want to go downtown, drivers will find themselves on Republican Street making a right turn to get onto Dexter Avenue N. Dexter is a very heavily used bike route between Downtown and North Seattle: the route that saw a 40% increase in bike traffic during the first few weeks of a post-viaduct Seattle.

The hundreds of people per day who rely on Dexter to get to work do not have an easy time of it. After years of construction along Dexter, the bike lane is still not fully protected along the street, with blocks where only a painted line separates people on bikes from traffic.

On Twitter, the Seattle Department of Transportation (SDOT) responded to a question about whether drivers making the turn from Republican to Dexter from the off-ramp would be prohibited from doing so when the light is red and cyclists have the right of way: “We’ll be monitoring this location closely to ensure that it is safe for people on bikes and on foot. There won’t be a right turn on red restriction when the tunnel opens, but if we see safety concerns we will be ready to make adjustments.”

Unfortunately, the City has been slow to respond when the lives of cyclists are put at risk, and even when they are lost.

In July of 2011, Mike Wang was cycling south on Dexter Ave N when he was struck and killed by a driver making a left turn across the bike lane. The driver left the scene, and was later sentenced to a hefty prison term, but the underlying action that he took–turning left across a bike lane–was a perfectly legal way to use the street. The design of the intersection afforded little margin for error.

Two years later, Brandon Blake was seriously injured at another intersection on Dexter, by a driver turning left. Two years after that, a helmet-mounted camera captures another collision that thankfully only results in minor injuries but which was caused by the same dangerous turn.

The city’s track record on failing to take action to remedy unsafe situations quickly after collisions occur is pretty clear, even just looking at the single example of Dexter Avenue, but there are many others.

The safety implications of allowing free-right-on-red from a freeway onto one of the busiest bike routes in the city are obvious to most, but they should be most obvious to the Seattle Department of Transportation. However, the message of Vision Zero design–building a margin of error into all transportation infrastructure so that if the road user fails–is still not permeating into the entire department judging by this design. When longtime transportation reporters like Mike Lindblom are pointing out the “safety hazard” that the department of transportation is apparently unconcerned about, there is a problem.

Now we can only hope that no one is seriously injured before the department changes its mind.