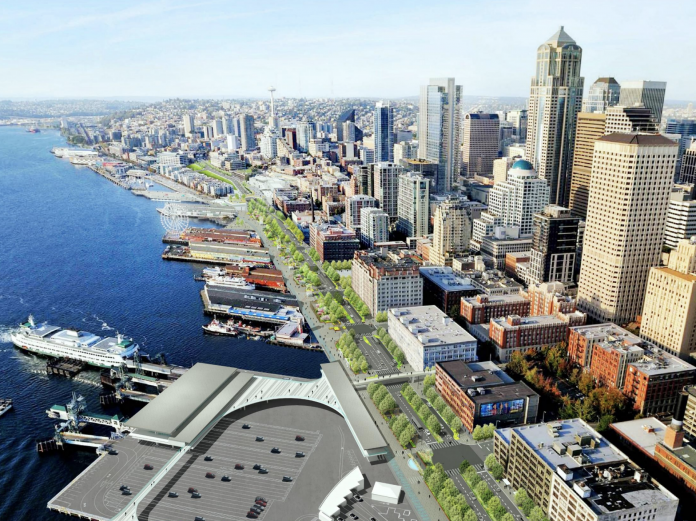 On Monday, the Seattle City Council approved a temporary moratorium on mobile home sites across the city, limiting the ability of those sites from redevelopment. The temporary moratorium will be in force up to one year. The city council also approved a Local Improvement District (LID) through Downtown Seattle to fund improvements on the waterfront. Property owners within the LID area will collectively be responsible for $160 million in special property tax assessments for up to 20 years.

Earlier this month, the city council was notified that Halcyon Mobile Home Park, an affordable senior living community, was at risk of redevelopment due to a change of ownership. The site could receive zoning changes under the Mandatory Housing Affordability program. Councilmembers had debated the merits of rezoning or keeping the current zoning in place on the site in deliberations on January 14th. The mobile home park is one of two remaining mobile home parks in the city, providing a rare affordable housing option to leaseholders.

Community members and other public commenters were adamant that the city council should impose a temporary moratorium to preempt redevelopment now.

“At Halcyon Mobile Home Park, we have lots of neighbors, and they live all over the park. We get to know them quite well,” Wesley Sheerer said. “We listen to them. We them places that they need to go and help them out if they can’t get there.” Mr. Sheerer spoke about his mentally challenged daughter living in the mobile home park and how the community there cares for her, urging the city council to help protect the mobile home park so residents like her could continue living there.

Under the adopted moratorium, the legislation preempts the “filing, acceptance, processing, and/or approval of any application to establish a new principal or accessory use, or change a principal or accessory use, for any site currently used as a mobile home park, as defined in Section 23.84A.032 of the Seattle Municipal Code.” A short-term work plan directs the Office of Planning and Community Development and Seattle Department of Construction and Inspections to develop permanent development regulations that encourage preservation of affordable housing provided by the private housing market.

The moratorium is not subject to environmental review under the State Environmental Policy Act (SEPA), but the city council must hold a public hearing within 60 days of adoption of the emergency legislation.

OPCD and SCDI will need to work within a short timeline to meet the ambitious work plan and present their findings to the Planning, Land Use, and Zoning (PLUZ) Committee:

The city council would then take up deliberations on legislation during the October to December timeframe, smack-dab in the middle of the budget season. Legislation would become effective in January 2020 to meet the one-year moratorium deadline.

A waterfront LID is finally a thing

Downtown Seattle property owners were able to get the city to reduce a proposed Local Improvement District (LID). Mayor Jenny Durkan struck a deal earlier this month that would set the total LID special assessment at $160 million instead of $200 million. To realize the full scope of waterfront improvements, the city needs $712 million in funding. Three separate but related pieces of legislation were passed to form the LID, which include the LID authorization itself, a no-protest agreement authorization between the city and property owners, and an agreement with Friends of Waterfront Seattle to program, maintain, and construct of some elements of the waterfront.

“Today, we’ve taken another significant step toward realizing the vision and development of a spectacular new public space on Seattle’s waterfront,” said Jon Scholes, President and Chief Executive Officer of the Downtown Seattle Association (DSA). “The legislation approved by the city council will ensure that the Central Waterfront Park is welcoming, clean, safe and attractive for years to come. This agreement includes important provisions for oversight and builds upon the effective and successful public-private partnership model established by DSA and the city, which has led to the transformation of Westlake Park and Occidental Square.”

The boundaries of the LID cover expansive areas of Downtown Seattle, including: the Denny Triangle, parts of Belltown south of Battery Street, Pioneer Square, Stadium District, Central Business District, and the Seattle Waterfront.

In addition to property owners paying into the LID, there will be several other funding sources for the waterfront revitalization. Friends of the Waterfront, a philanthropic arm of waterfront interests, will kick in $110 million for the waterfront projects. This is $10 million more than the group had originally pledged. The State of Washington will contribute another $193 million. The remaining funds will come from other city sources, primarily from a general property tax, though a portion will also come from the Commercial Parking Tax. Excluding the special property tax assessments through the LID, the city will contribute $249 million to the waterfront projects.

The city council has received heavy criticism from condo owners about the LID, including at yesterday’s public comment. That is because commercial property owners, which include those controlling apartments, make up the largest share of the property tax assessments and represent the largest number of tenants while condo dwellers number over 4,600 households.

The city brokered a deal in a such a way that commercial property owners would not protest the creation of the LID, effectively meaning that if they signed no-protest covenants the LID would be unstoppable even if the majority of condo property owners opposed it. One condo owner claimed that the marginal tax increase will force him to move out of town or possibly into a camper van. But the LID has built in several equity relief values, including alternative payment options for property owners experiencing economic hardship or who are considered low-income, disabled, or elderly.

Over the next 20 years, property owners would be able to pay their share of the LID taxes in one lump sum or ongoing assessments. The city believes that the typical condo owner will pay an extra $8 per month or $96 per year over a 20-year period. That works out to about $1,900, which is $500 fewer than the original LID proposal. Apartment tenants could expect to pay about half that if their landlord passes on the assessment costs in their rent.

The LID is not entirely a done deal. There will still be a 30-day period where protests can be made and a legal appeal period in March. The city council will still need to vote on a budget amendment, likely in April, and final special benefit study of the LID will need to be completed in the summer. A final special tax assessment would occur in 2020, after which bond issuance and assessments begin.