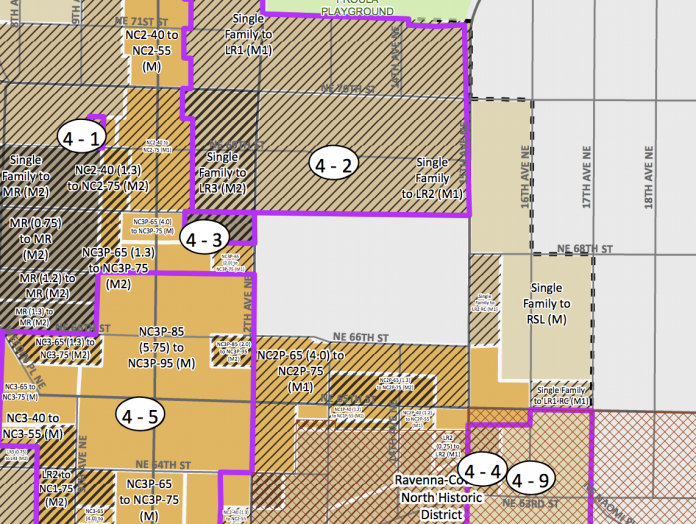 On Monday, the Seattle City Council held the first of two meetings this week to discuss site- and area-specific rezones tied to the Mandatory Housing Affordability (MHA) program. While the rezones will primarily target existing commercial and multifamily areas, single-family zones in urban villages would also be rezoned to increase development capacity and require affordable housing contributions from new development. Some urban villages would also receive boundary expansions and rezone other single-family areas.

How to interpret the maps and tables

Each of the tables below correspond to the district map directly above them. Highlighted in the tables are current zoning, proposed zoning under the MHA legislation, and requested amendments to proposed zoning. At the far right of the table is a notation of whether or not the requested zoning change is consistent with the studied zoning changes under the MHA Environmental Impact Statement (EIS). Not included, however, are studied rezones under Alternatives 2 and 3 of the EIS. Changes outside of the scope of analysis contained in the EIS would require further environmental review to be eligible for adoption by the city council.

Two years ago, we provided an overview of how the MHA rezones would work, including background on M, M1, and M2 rezones which indicate higher levels of affordable housing requirements and increased development capacity (e.g., height, floor area, and density). For those unfamiliar, Seattle uses shorthand codes to indicate zoning types:

Affixed to some zoning types are two and three digit numbers that indicate maximum building height. In rare instances, “P” for the “Pedestrian” designation and “RC” for “Residential Commercial” are also affixed to zoning designations.

In Councilmember Rob Johnson’s district (District 4), a total of 18 amendment proposals were discussed. By and large, the amendment proposals come from areas zoned as Single Family 5000 where some residents wish to be rezoned to the lowest MHA zone–Residential Small Lot instead of a Lowrise zone. This is a consistent theme shared by other districts. Interestingly, there is one instance where a proposal would seek to rezone the area around Roosevelt’s future light rail station to 125 feet. That proposal, however, would not be possible under the scope of the MHA EIS since it was not analyzed. Several other rezone proposals also were beyond the scope of the EIS.

On 35th Ave NE, there is a private amendment proposal (Map Number 4-7) that would rezone an SF 5000 property situated between two Lowrise properties to Lowrise 2. The proposal, however, would not be eligible for a rezone under the EIS. “This is one of those where I’ll confess to feeling frustrated because this parcel is owned by a Jewish synagogue that would love to build affordable housing on this site,” Councilmember Johnson said. “But because it’s not within the scope of the EIS, it’s difficult for us to include here in the final proposal. So there are going to be times like that where we have good ideas that require additional analysis that unfortunately just won’t be able to make it in this time around.”

Councilmember Sally Bagshaw expressed a desire to consider the Jewish synagogue rezone proposal saying that affordable housing was a high priority for the city. Ally Pennucci of Council Central Staff provided an explanation similar to Councilmember Johnson’s about the restrictive nature of rezones that could be considered in light of EIS. Instead, an alternative path as Councilmember Mike O’Brien spoke to may be more viable in a separate planning process, albeit at a later date, to rezone “geographically isolated” sites. A companion resolution to the rezones may address this issue to set in motion another process.

In Councilmember O’Brien’s district (District 6), there were 15 formal amendment proposals discussed. Most of the amendment proposals are centered on the Crown Hill Urban Village. Surprisingly, there are virtually none proposed for Ballard, Greenwood, and Phinney Ridge.

In the north end of Crown Hill Urban Village, a large around of SF 5000 properties would rezoned to Lowrise 1 (Map Number 6-3). However, many community members would prefer to have less dense zoning and development patterns on their blocks. Councilmember O’Brien said that he recent did a community walk of the area and said that he may propose adjustments to planned zoning. “Kind of on that corner across from Crown Hill Park and adjacent to some of the neighboorhood commercial to south, I will likely be interested in coming in there with a pencil and drawing a Lowrise section to maintain and the rest going to RSL,” he said.

During the briefing, Ketil Freeman of Council Central Staff explained that discussions over the weekend had identified other potential changes at the heart of the Crown Hill Urban Village at NW 85th St and 15th Ave NW. Buildings up to 75 feet were studied under the EIS and therefore could be considered as an amendment proposal since some of the parcels are only planned to go to 55 feet. Councilmember O’Brien expressed support for the concept and said that there is also some local support for it as well. However, he did say that he may bring forth a proposal to reduce planned heights from 75 feet to 55 feet for a small pocket a half-block west of the intersection of NW 5th St and 15th Ave NW.

Similar to Councilmember Johnson, Councilmember O’Brien lamented that a property owned by the Boys and Girls Club was ineligible for rezone (Map Number 6-12). He hoped to capture that proposal in a resolution for separation consideration.

In light of past MHA rezones for South Lake Union, Uptown, and Downtown neighborhoods, there were very few (three in total) rezone amendment proposals in Councilmember Bagshaw’s district (District 7).