As we’ve explained at great length, MHA requirements are tied to increases in development capacity through rezones in urban villages and urban centers as well as other existing multi-family residential and commercial zones.

How MHA Amounts Will Be Determined

We learned last month the MHA requirements not only will differ by area of the city, they will also differ by how much development capacity is increased. The MHA-C legislation had already prescribed specific MHA amounts, but the MHA-R legislation had not settled on specific numbers when adopted. Unsurprisingly, the Mayor’s proposal would change the established relative fee amounts or percentage of units that would be required for affordable housing in particular areas of the city and be directly tied to the type of development capacity change made through a rezone. And importantly, it would change the requirements for MHA-C in addition to setting them for MHA-R.

Based on the original MHA framework of providing increased development capacity in combination with new mandatory affordability requirements, the City is introducing:

1. A tiered approach of higher performance and payment requirements for areas–such as the U District-that are receiving a higher development capacity increases than the standard one story proposed as part of MHA, and

2. A revised map that moves some areas at higher risk of displacement into higher performance requirements–including the Central District, Chinatown/ID and parts of the Rainier Valley–to reflect updated rent data and the City’s analysis of higher displacement risk.

The Mayor’s release explains how the MHA “M” suffixes relate to development capacity changes by placing each zone type into a category. It’s important to remember, the proposal also comes with development regulation changes to individual zones so a zone change doesn’t have to go from, say, LR2 to LR3 to actually constitute a development capacity change. Most zone types will have increased height and floor area ratio (FAR) if identified as the MHA variant on the zoning map (e.g., LR2 (M) or LR3 (M1)). Categories are listed as follows:

Using the table above, we can determine what type of MHA “M” suffix—and by extension, MHA requirement—a rezone will be assigned and require based upon the following:

Standard M Suffix: If a rezone results in no change in category, the property would receive a standard M suffix.

Zones with an M1 Suffix: If a rezone resulted in a property changing to the next highest category, then the property would receive a M1 suffix. For example, a Low Rise 1 zone that is rezoned to Low Rise 3 would change from Category 2 to Category 3, so the properties would be subject to M1 requirements.

Zones with an M2 Suffix: If the rezone resulted in a property changing by two categories or more, the property would receive a M2 suffix. For example, Single Family properties (within an Urban Village) that are rezoned to Low Rise 3 would change from Category 1 to Category 3, so the properties would be subject to M2 requirements. 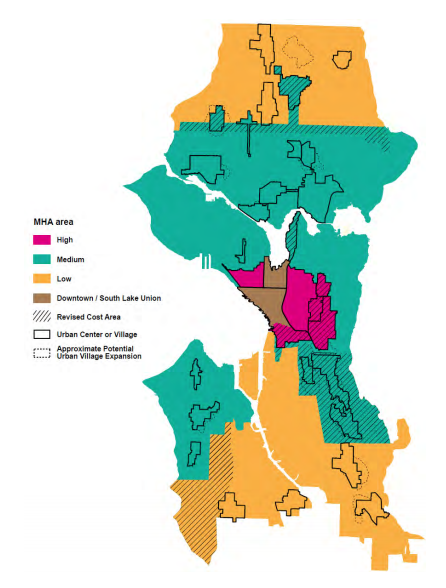 Specific changes that will increase affordability in areas at higher risk of displacement include:

– The Chinatown / International District will be included in the High-MHA geographic area and not in the Downtown / South Lake Union area for the purpose of applying MHA payment and performance amounts. This results in higher requirements for this area.

– The High-MHA geographic area has been expanded to include the Central Area and Madison–Miller neighborhoods. Development in these areas will be subject to the highest MHA requirements in the tiered MHA table, ranging from 7% to 11%.

– The Medium-MHA geographic area is expanded to include formerly Low-MHA areas: North Beacon Hill, North Rainier, and Columbia City, Northgate, and Crown Hill. Development in these areas will be subject to MHA Medium amounts that range from 6% to 10%. These changes increase the area citywide where high and medium MHA payment and performance amounts apply.

Further information on the remaining draft MHA rezones is still forthcoming as well as more details on the full suite of MHA-related development regulation changes that would be made to existing zones. We also expect that there will be other minutia paired with the proposals.

MHA Zoning Proposals Summary by The Urbanist on Scribd