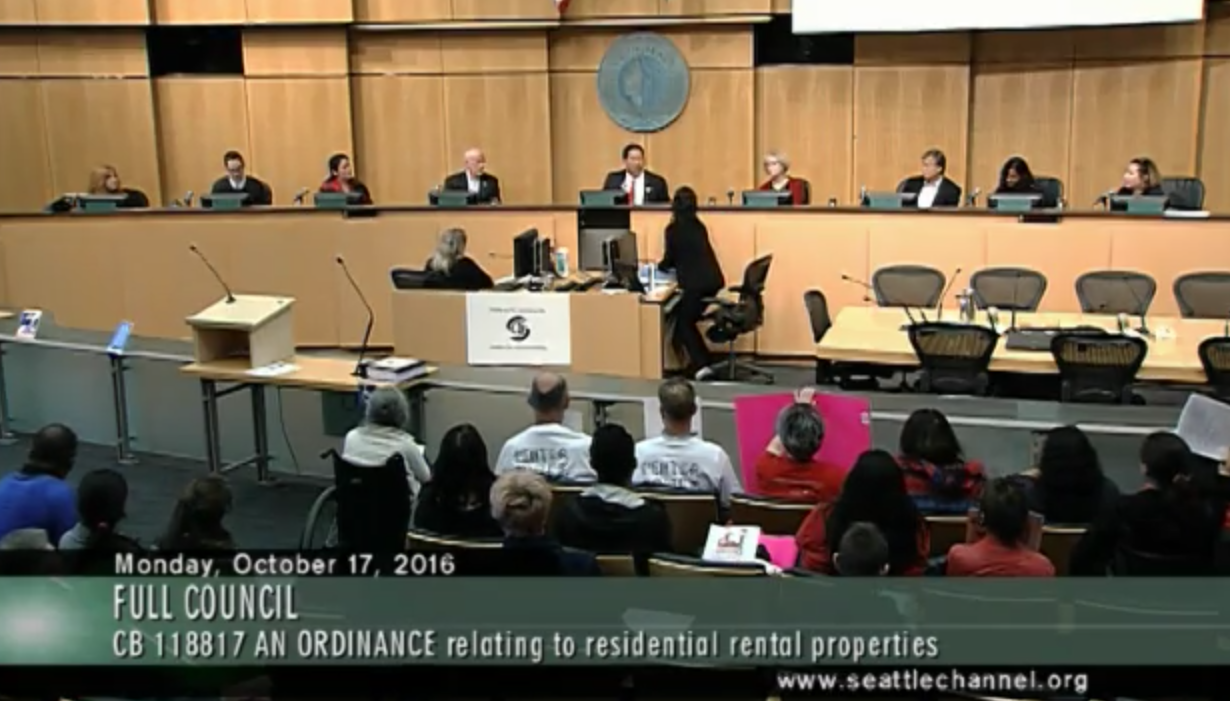 Seattle’s multi-year process to update the city’s Comprehensive Plan has come to its conclusion finding unanimous consent and approval from the City Council. A major renters’ bill to give tenants the option of capping move-in fees, however, was referred back to committee, and a piece of the “ramps to nowhere” near SR-520 appears headed for preservation.

The City Council took up review of the Mayor’s Recommended Plan for Seattle 2035 in May, sending the proposal to most of the Council’s standing committees for review and deliberation throughout the summer. Councilmembers offered their input to the Planning, Land Use, and Zoning (PLUZ) Committee, which then held a series of meetings in August and September to discuss a slate of more than 190 amendments. At the outset that work, more than 140 technical amendments and 13 key policy decisions were identified before eliminating some and adding others. The most important changes that the PLUZ Committee considered involved:

Councilmember Herbold’s amendments made changes to the newly created Community Involvement Element to define the term “community plan,” strengthen the language of certain sections for communities involvement and consideration, and add a new policy to prioritize community planning:

CI 2.12 Provide sufficient funding and resources to work with communities to update community and neighborhood plans to maintain their relevancy and consistency with community goals and the citywide policies of the Comprehensive Plan.

Council President Harrell’s amendment was solely focused on clarifying the meaning of “environmental justice” in the Community Involvement Element:

The City Council heard extensive comment from the public on Councilmember Kshama Sawant’s legislative proposal to cap rental move-in fees. Nearly 40 speakers provided testimony on the issue, with most in favor and many of whom were landlords themselves. Debbie Carlsen, a landlord and Executive Director of LGBTQ Allyship, spoke on the proposal saying:

As a landlord in North Seattle, I got the chance to have quality tenants. A queer couple, one who is working at the UW in the warehouse and also someone who works at YMCA. They could not pay their first and last deposit to get into my condo. And they asked me for a payment plan and I agreed, put it in the contract, it was easy, accessible, and I got my tenant in there and I got a quality tenant that I appreciate and they got accessible housing. For landlords like myself, this is a non-issue.

As tenants get more organized locally, we are starting the process of winning individual tenant rights that will add up to a significant Tenants Bill of Rights for this city. This Council bill limits non-refundable fees to only those specifically mentioned under state law, limits security deposits and non-refundable fees to no more than one month’s rent, which is pretty standard anyway, and most importantly allows tenants to pay the security deposit and last month’s rent on a payment plan. That final aspect of the bill will allow many tenants overcome a substantial hurdle to finding housing, as you have heard in public comment.

Prior to being sent to the full Council, the legislation had gone through two rounds of review in committee and received unanimous support from Councilmembers Sawant, Juarez, O’Brien, Johnson, and Herbold. Councilmember Sawant had expected the legislation to pass at the full Council meeting, but early in the discussion Councilmember Debora Juarez said that she felt it should go back to committee to ensure that it is drafted to withstand legal challenges and address enforcement and implementation issues that the Seattle Department of Construction and Inspections (SDCI) had identified. Councilmember Juarez also said that she wants landlords to be incentivized to lower move-in costs and was worried about unintended consequences like increased rents compensating for the impacts of the law.

Meanwhile, Councilmembers Sally Bagshaw, Mike O’Brien, and Lisa Herbold indicated that they were ready to vote on the bill, but Councilmember Bagshaw said she would respectfully allow more time to debate the bill in committee if that’s what other members would need to support it. Councilmember Lorena González also expressed a desire to discuss the bill further in committee (she was absent during the September 27th committee meeting). She said that she would like to see an anti-retaliation provision added, have a reconciliation between the proposed ordinance and the City’s just cause eviction ordinance, and an obligation for landlords to put deposit money in an interest-earning escrow account so that capitalized interest would go back to the tenant when it was returned.

Councilmember Tim Burgess clarified that there would be time during the busy season to hold another committee meeting to hear the bill. A date in November was suggested, but Council President Harrell made a more general motion for a timeline “on or before December 13th” to provide flexibility. The Council isn’t exactly under the gun since the legislation wouldn’t be effective until January 1, 2017 whether it had been approved at the Council meeting yesterday or later this year. On a seven-to-two vote, the bill was referred back to committee with Councilmembers Sawant and O’Brien opposing the motion.

What The Legislation Would Do

Tenants can elect to pay move-in fees as installments instead of one bulk payment as part of securing a unit or paying the first month’s rent. The scheme differs by the type of rental agreement length and frequency of payment, but generally, a lease that lasts six months or longer would entitle a tenant to payment of six consecutive move-in fee installments during the beginning of the lease. The amount of fees are also capped at the equivalent of one month’s rent. Tenants and landlords, however, could establish alternative plans if mutually agreed upon. The legislation, as drafted, would also do a number of other things:

Preserving Section Of Ramps To Nowhere

The Councilmembers also unanimously voted to move forward with the preservation of a small section of the “ramps to nowhere” that would have connected the SR-520 bridge to the never-constructed “R. H. Thomson” freeway proposed to run through the Central District, demolishing dozens of blocks of homes. The ramps were constructed by the Washington State Department of Transportation before the entire freeway project was cancelled due to opposition.

Preserving the ramps is intended to serve as a symbol of the effectiveness of citizen activism. Councilmember Herbold brought up a letter sent to the Council in support of the resolution by King County Councilmember Larry Gossett, who was a founding member of the University of Washington’s Black Student Union and who worked to stop the freeway in the 1960s.

Councilmember Rob Johnson brought up possible concerns about federal environmental regulations, issues regarding the City’s memorandum of understanding with the state department of transportation, and concern over the structural integrity of the structures to be preserved. But, those being all items that are sure to be addressed with the passage of the resolution, the proposal moved forward.