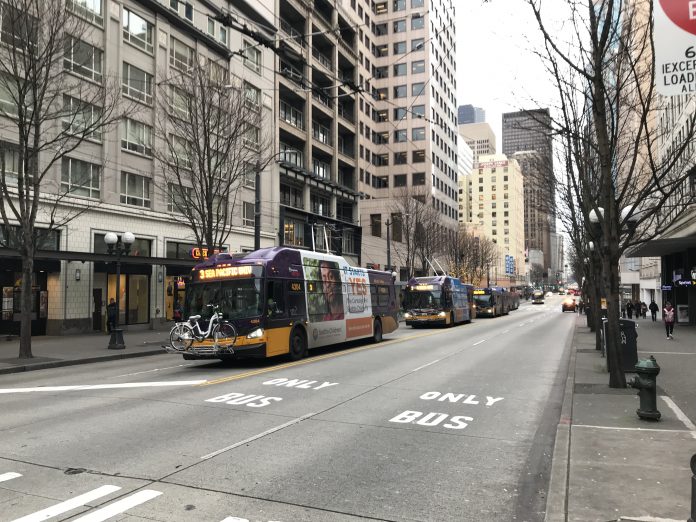 In 2016, the city embarked on shifting the paradigm for determining level-of-service related to transportation and development impacts on the city’s transportation network. Instead of quantifying local transportation impacts by development projects on individual city street corridors, the city sought to establish targets for transportation modes (e.g., walking, biking, transit, and driving) to be achieved by 2035. A total of eight geographic sectors were identified in the 2016 comprehensive plan update, each with its own target. Generally speaking, sectors specify a lower drive-alone rate than than the baseline 2016 rate.

The adopted legislation will help realize the objectives of the updated comprehensive plan. Developments subject to the LOS standards will need to implement one or more mitigation measures to reduce drive-alone rates, which are to be specified in a new joint directors’ rule by the Seattle Department of Construction and Inspections (SDCI) and the Seattle Department of Transportation (SDOT).

“We in 2016 adopted an update to our comprehensive plan and within that we adopted a level-of-service standard that relies on what the industry would call a ‘multimodal level-of-service’,” Councilmember Rob Johnson said. “It sets a series of targets for reducing the number of folks driving alone living in our neighborhoods throughout the city and sets some goals for those targets.”

As we reported in December, the legislation will make several significant changes:

In December, Councilemember Mike O’Brien had expressed interest in modifying the thresholds for projects subject to LOS requirements. His thinking was that smaller projects should also be subject to mitigation options. No amendment, however, was brought forward during the city council meeting for consideration and adoption, leaving in place thresholds contemplated by SDCI.

Some community members raised concerns during Monday’s meeting about changes that the legislation makes, particularly to Downtown Seattle areas.

“My primary concern as a resident of Downtown is the removal of the Director’s Rule 5-2009,” Ruth Danner said. “That rule requires new construction to consider levels of service for intersections Downtown and when it is removed and replaced with an effort to reduce single occupancy vehicles, but Downtown is exempted because it’s within the half-mile limit for the Link. Downtown we will have no more mitigation. You’ll be adding more parking spaces to parking garages but not counting the cars that will fill them.”

“Please reconsider voting ‘yes’ on the level-of-service standard bill before you,” Meghan Cruise said. “It was written with residential neighborhoods in mind, but in the city center it will compound gridlock.”

The legislation does exempt Downtown zones from contributing to mitigation measures associated with the LOS standards since Downtown zones are located in an Urban Center.

Councilmember Lisa Herbold responded to some comments of concern that were expressed by community members. “Mitigation of transportation impacts for Downtown development as a matter of policy is limited currently to programmatic measures,” she said. “There is SEPA review for Downtown projects and the mitigation that is most often used are Transportation Management Plans. In addition, development regulations in and of themselves create disincentives for single occupancy vehicle use Downtown.”

The joint directors’ rule that Councilmember Johnson mentioned will help implement the legislation. A draft version of the rule has already been shared by SDCI and SDOT. Developers would have a variety of choices to meet the mitigation requirement if the draft rule is adopted. According to SDCI, options would include:

The legislation should become law in next two months with the joint directors’ rule following shortly thereafter.