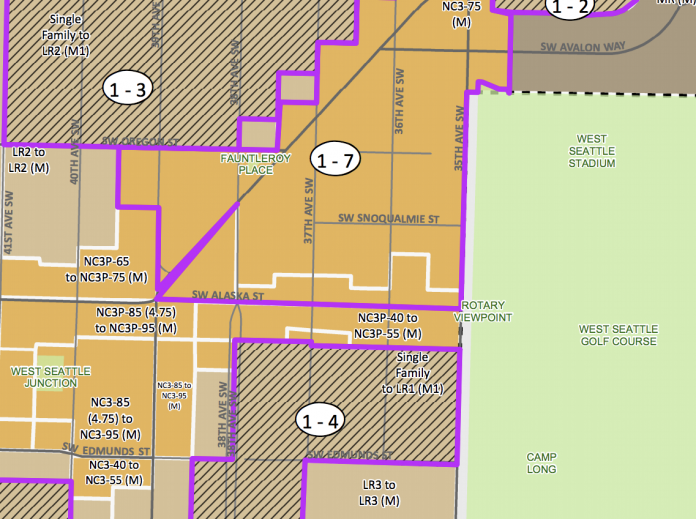 This article is the second in a two-part series. See the first part for Districts 4, 6, and 7.

On Wednesday, the Seattle City Council held the second of two meetings this week to discuss site- and area-specific rezones tied to the Mandatory Housing Affordability (MHA) program. While the rezones will primarily target existing commercial and multifamily areas, single-family zones in urban villages would also be rezoned to increase development capacity and require affordable housing contributions from new development. Some urban villages would also receive boundary expansions and rezone other single-family areas.

How to interpret the maps and tables

Each of the tables below correspond to the district map directly above them. Highlighted in the tables are current zoning, proposed zoning under the MHA legislation, and requested amendments to proposed zoning. At the far right of the table is a notation of whether or not the requested zoning change is consistent with the studied zoning changes under the MHA Environmental Impact Statement (EIS). Not included, however, are studied rezones under Alternatives 2 and 3 of the EIS. Changes outside of the scope of analysis contained in the EIS would require further environmental review to be eligible for adoption by the city council.

Two years ago, we provided an overview of how the MHA rezones would work, including background on M, M1, and M2 rezones which indicate higher levels of affordable housing requirements and increased development capacity (e.g., height, floor area, and density). For those unfamiliar, Seattle uses shorthand codes to indicate zoning types:

Affixed to some zoning types are two and three digit numbers that indicate maximum building height. In rare instances, “P” for the “Pedestrian” designation and “RC” for “Residential Commercial” are also affixed to zoning designations.

In Councilmember Lisa Herbold’s district (District 1), there is a total of 11 rezone amendment proposals so far. Most of the proposals seek to reduce MHA rezones to RSL, which is the smallest rezone available under the MHA program to increase development capacity. Sites where these rezones are sought are currently zone SF 5000 and come from community members. In one case, a property owner with LR3 RC zoning does not want a rezone to LR3 RC (M), which would be a small density bump and unlock affordable housing requirements.

Before Council Central Staff provided a briefing on the district rezones, Councilmember Herbold inquired about other types of MHA regulatory changes. “One thing that didn’t heard as a bucket that I recall we were able to accomplish because they are land use changes, but not specifically map changes, are some of the issues that are identified similar to our previous MHA rezones in different communities,” she said. “Issues related to setbacks, the size of retail spaces, some of those things. I haven’t heard that as a bucket that we are looking to legislate in this process.”

Regarding proposed rezone amendments to significantly increase development capacity in the heart Junction, Councilmember Herbold offered words of commendation and said she would be interested in additional community-driven planning in advance of light rail, which is slated to arrive in 2030. Councilmember Herbold explained that community members offered a bit of swap by suggesting higher rezones to the center while being receptive to RSL zoning at the edges of the urban village. However, the higher rezones would not be possible under the scope of the EIS and the proposed rezones near the edges of the urban village are LR1.

Councilmember Herbold expressed an interest in trying to balance transitions between zones throughout the urban village and wondered if other specific development regulations or design guidelines could address that.

Council Central Staff raised zoning concepts by community that were not reflected in the rezone amendment packets. On California Ave SW in Morgan Junction, for instance, properties along the street would receive a Pedestrian designation, which would necessitate a variety of requirements, such as minimum density, transparency, and active non-residential ground floor uses. Community has also requested design standards for the area to encourage more light with bigger developments.

Lastly, Council Central Staff highlighted South Park as an area where community members are interested in preserving historic resources. Some additional review work will need to be done to identify any historic structures and if they should be exempt from MHA rezones. Councilmember Herbold spoke to those issues about what she had heard from community and other areas in her district that would like to pursue historic preservation.

A total of 11 amendment proposals have been drafted in Councilmember Bruce Harrell’s district (District 2). The bulk of the amendment proposals by community members would exclude areas for urban village expansion and rezoning, but several of them would go beyond the scope of what was studied in the EIS.

The Mount Baker Park Historic District was recently designated as a historic district as a result of the MHA process. Community members within the historic district have requested that any MHA rezones that overlap with the district boundaries should be eliminated (Map Number 2-1). Councilmember Harrell said he supported the idea but had not made up his mind on all of the rezone proposals, suggesting he could be open to further changes.

West of Mount Baker, community members in and around the North Beacon Hill Residential Urban Village have requested that the urban village boundaries not be expanded nor properties be rezoned (Map Number 2-2). Councilmember Harrell acknowledged that community members want to preserve the unique characteristics of their community and affordability, but emphasized his support for the MHA program that is seeking to create more affordable housing options for people. His remarks indicated that he may pursue some adjustments and that unique circumstances in other areas may make decisions challenging for councilmembers.

During the briefing, Councilmember Harrell discussed several other amendment proposals. For a reduced height proposal near Cheasty Park (Map Number 2-4), he indicated supported since a new park might be created. Despite a proposal to reduce heights planned for the Rainier Beach light rail station (Map Number 2-11), Councilmember Harrell said that the higher heights could help realize economical objectives built into the zoning, such as college spaces, childcare center, and food incubator center. He said he was confused by some of the concerns with the rezone and wanted to better understand what those were. He was also unsure about an amendment proposal in the North Rainier Urban Village next to a park that may or may not be expanded (Map Number 2-5).

Circling back to the Rainier Beach light rail zoning, Councilmember Harrell wanted to know if there was an alternative method to not rezone to the higher heights but allow properties to later be rezoned and take advantage of provisions for the SM-RB-125 (M) zone. Council Central Staff confirmed that this could work if a private rezone was applied for and the development regulations existed in the Land Use Code.

In Councilmember Kshama Sawant’s district (District 3), nearly half of the land mass is proposed to receive MHA rezones. A surprisingly small number of amendment proposals by community members have been submitted with 16 being covered by Council Central Staff.

In Debora Juarez’s district (District 5), community members have requested 10 different amendment proposals. Many of these are requests to much denser zones, but fall outside of the EIS scope. In the Aurora-Licton Springs Urban Village, community members are pushing for a rezone to NC3P-65 and NC3P-75 zoning (Map Number 5-10), which would help create a more walkable neighborhood with active street-level uses and higher levels of transparency due to the requested Pedestrian district. An even more ambitious proposal is to rezone several parcels in the heart of Lake City to NC3P-145 (M2) (Map Number 5-6). That amendment proposal, however, is not consistent with the EIS.

On February 21st, the city council will hold a public hearing for the full slate of MHA rezones and companion changes to the Land Use Code. Final adoption of zoning and Land Use Code changes are anticipated to occur in March. If you have feedback on the proposals, consider contacting the city council.