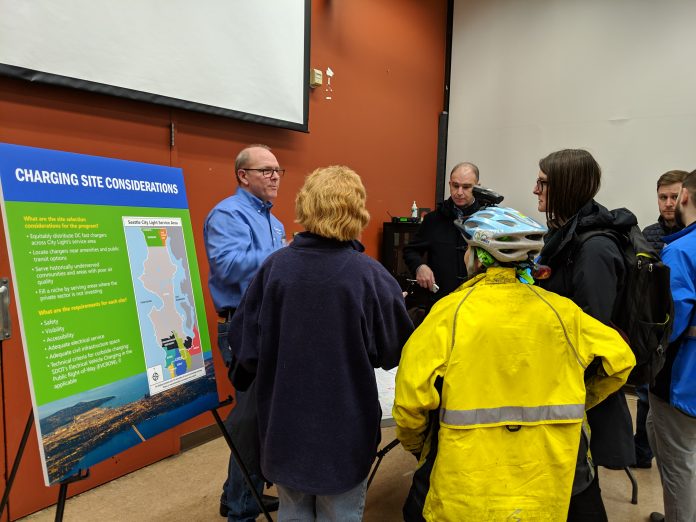 If you need space in front of the Capitol Hill light rail station–and you’re not a bike or streetcar–contact the Seattle Department of Transportation (SDOT).

SDOT staff communicated to Seattle City Light that it could proceed with plans to install electric chargers. In emails and in-person, SDOT indicated there’s no reason to be concerned about the Broadway bike lane or streetcar extensions because 2024 is the earliest any changes could happen.

On Wednesday, this same message was communicated to a small group of people participating in an open house with about ten city staff.

Getting From Gas To Electric

An alignment of disparate factors led to the proposed station. SDOT has developed a program for granting public right-of-way for chargers–EVCROW (Electric Vehicle Charging in the Public Right-of-Way). The program specifically prohibits chargers where transit-only lanes are planned. But the program is silent on planned bike lanes.

EV charging infrastructure in the public right-of-way may be located in designated Urban Centers and Urban Villages, except:
– On residential local access streets, adjacent to parcels zoned as single-family;
– Along current or planned transit priority streets where EV charging infrastructure may obstruct an existing or future transit only lane or business and transit (BAT) lane, as designated in the 2016 update of the Transit Master Plan;

This enabled Seattle City Light to apply for a permit at the location. But even before the permit application, Seattle City Light staff picked the spot for technical reasons and got a green light from SDOT. City Light found the location appealing because there is existing electrical infrastructure that will reduce the cost of installation. Additionally, the sidewalk and street widths meet required minimums.

Beyond that, there are a variety of mushier advantages. One Seattle City Light (SCL) staff member indicated, while another location would meet the technical requirements–Boylston Ave between Republican and Harrison Streets–it is a more residential area. Multiple conversations with SDOT and SCL made clear that the proximity to transit is considered an advantage rather than a disadvantage. In fact, proximity to transit is one of the four site considerations SCL takes into account.

It seems likely chargers will get a fair amount of usage. Seattle City Light reported that the two chargers on Beacon Hill were used about 15 times a day, with normal charging sessions between 20 and 30 minutes. This means each space is occupied for about four hours a day.

If the station happens, the number of people using it will equal the number of additional private vehicle trips in front of the light rail station and through the crowded Broadway and Olive intersection. If customers arrive while another vehicle is charging, it’s not clear where they would queue.

No Plan for Non-Car Mobility on Broadway

The indefinite delay of the bike lane is a microcosm of the city’s general challenges. Seattle Bike Blog reported that the City completed just 4% of its 2018 bike lane goals. Plans for 2019 appear to be equally dismal, potentially only adding 2.9 more miles. Even announcing the planned projects has been delayed.

At the Wednesday meeting, SDOT staff appeared to be deflecting concerns about the Broadway extension by displaying plans about the downtown basic bike network, suggesting there’s not enough money to do both. Yet even that infrastructure is facing delays. It’s now been over 300 days since those plans were supposed to move forward.

Meanwhile, the city is apparently underspending money from the last transportation levy.

These facts form the background of Seattle City Light’s proposal for a charging station directly in the path of a planned bike lane and streetcar extension. Capitol Hill Seattle Blog reported that the transit and bike extensions were “indefinitely deferred” after the Capitol Hill Chamber of Commerce pushed back. The city was forced to return $10 million in grants, after doing nearly $3 million in planning work. More recently, efforts to speed up the existing streetcar on Broadway were also iced, over loading space and parking concerns.

Seattle City Light and SDOT staff were both quick to point out that the the permit is still being considered and the station could be moved if there were ever plans to extend the bike lane. It’s unclear though whether public feedback will make any difference. Two Capitol Hill community groups already voiced displeasure about the location in September and October of 2018. Seattle City Light proceeded anyways. It’s possible the agency is under pressure to roll out more chargers because the mayor promised 20 fast chargers in 2018. Only two were installed.

As for the bike lane and streetcar, it’s not clear there will ever be enough money or political will. 400 new apartments will open nearby in early 2020 and the currently underutilized curb space will see a lot more demand.

If the bike lane is ever extended, SDOT and Seattle City Light staff were quick to note that the costs from relocating the charger would be paid by Seattle City Light. What’s less clear is how that cost might be portrayed in the media or during public meetings. SDOT will have to invoice Seattle City Light so the cost will still appear in SDOT’s project budget, potentially handing opponents another brick to smash the window of change.

Streetfights Are about Opportunity Cost

At Wednesday’s open house, most conversations with city staff were focused on why the location is optimal for electric chargers. But allocating public space is fundamentally about competing uses and opportunity cost. There are a few big opportunities.

First, the bus stop on the corner of Broadway and Olive, north of the intersection, should be moved south one block, placing it on the same block as the light rail entrance. The current location requires Routes 9, 49 and 60 to pull into the curb, causing delays when trying to merge back into traffic. Also, the transfer for many riders requires crossing a street. The extra distance is an unnecessary obstacle for people with mobility challenges. A matter of seconds can also be the difference between making or missing a connection.

A one block extension of the bike lane would also help a lot of trips. The corner of Broadway and Olive is a hub for bikeshare. It’s also the starting point for many people combining their bike trip with Routes 8, 10, and 43. People travelling south from that corner need to navigate a busy sidewalk, cross the street twice, or salmon through oncoming traffic in order to reach the protected bike lane. A one block extension would allow people to start their trips immediately in a protected bike lane.

Lastly, if the city thinks Uber and Lyft are important last mile services, it’s unclear why a charging station would be built rather than load/unload zones.

Costs appear to be a big consideration for this location. Seattle City Light is currently under a lot of scrutiny because of plans to increase rates. Reporting from Crosscut also illuminated that the agency is way above budget on the smart meter implementation.

It’s less clear how much money would be saved at the Broadway location. SCL expects the installation of two chargers to cost around $190,000 but could not answer how much it would cost to move the chargers. It remains a question whether or not another location would be cheaper in the long run if the chargers are ultimately moved.

SDOT’s support of the location also appears squishy. When asked for comment about the location, SDOT spokesperson Dawn Schellenberg said, “We want people exiting the streetcar, light rail or bus to have good access to walk, use bike share and grab a ride-hail service provider to their destination, preferably with vehicles powered by clean electricity.”

Any environmentalist can tell you that an electric Uber or Lyft is better than one spewing fumes. But choosing a location based on the needs of private companies–potentially impacting accessibility for other modes–is a subsidy. It’s not clear there is public will to subsidize electrification of these companies’ fleets. And if there is public desire, it’s unclear what a good policy would look like.

This is especially important considering one of the mayor’s most important consultants is a lobbyist for Lyft. While the city considers investing in infrastructure to help these companies, there are alternative approaches that could be considered. For example, the city could tie their licensing to electrification. Forcing Uber and Lyft to electrify might even spur private investment to build charging infrastructure which–like every gas station in the city–doesn’t use the public right of way.

Seattle set itself apart from other American cities with its commitment to public transportation. It’s one of the only US cities seeing year-over-year ridership growth. This success is only possible because of our commitment to prioritize walking, rolling, biking and transit.

The intersection of Broadway and Olive is nearly a perfect example of that effort. It’s a hub for six bus routes, bikeshare, a streetcar and light rail. It’s been so successful the Seattle Department of Transportation’s annual report indicates it has the highest pedestrian counts of any area surveyed in the entire city.

Yet there is a glaring problem with this location. Traffic continues to impede bus reliability and threaten pedestrian safety. The city already dropped a decision to protect pedestrians by adding a left turn signal at the intersection. High costs were the concern. The bike lane and streetcar extensions also appears dead due to cost.

Meanwhile, investments like the electric charging station have enough money to move forward, driving even more motor vehicle trips through one of Seattle’s busiest pedestrian spaces.

SDOT still needs to approve Seattle City Light’s permit and the comment period is open until March 14th. You can send an email to publicspace@seattle.gov or
SCL_ElectricVehicles@seattle.gov.