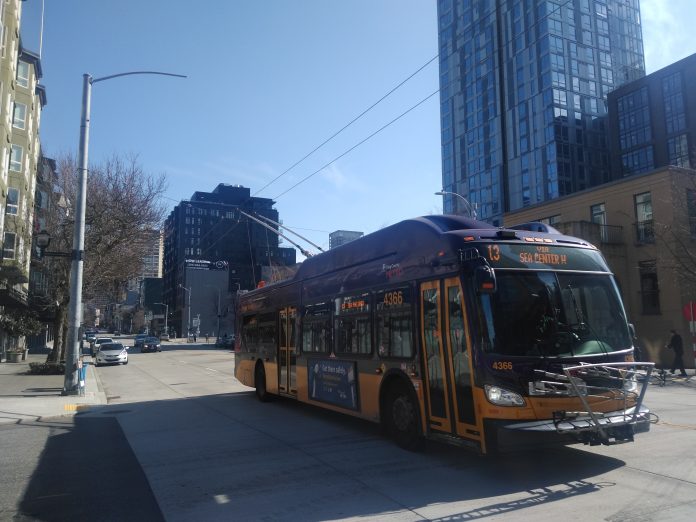 On Thursday morning, the Move All Seattle Sustainably (MASS) Coalition–which includes The Urbanist as a member–issued a statement urging the City of Seattle to extend Third Avenue bus lanes through Belltown. Currently, the bus lanes stop at Stewart Street. The call comes on the eve of the Downtown Seattle Transit Tunnel converting to rail-only operations to make way for the Washington State Convention Center Addition and light rail expansions to the Eastside, Northgate, and eventually Lynnwood, Federal Way, and beyond.

This operational change means more buses will move to highly congested Downtown surface streets during the Period of Maximum Constraint, or otherwise known as the Seattle Squeeze. MASS warned that this could spell trouble:

On Saturday, buses will permanently move out of the Downtown Seattle Transit Tunnel (DSTT) leading to 830 new bus trips on already crowded surface streets in Downtown Seattle. The city has made important improvements with the new 5th/6th Avenue bus lanes and implementation of all door boarding on 3rd Avenue. But given the need to further prioritize transit, today the MASS Coalition is calling on the City to extend bus priority on 3rd Avenue from Stewart Street to Denny Way. It works well south of Stewart, and should be extended the length of downtown.

Here is why: 3rd Avenue is the busiest bus corridor in the country. Even before coming additions from the DSTT, bus routes carrying more than 100,000 riders use 3rd Avenue every weekday between Stewart and Denny. Yet this section of 3rd Avenue still prioritizes single-occupant vehicles and parking–even though it carries only 7,300 cars a day. Slowing down the 100,000 commuters that use 3rd Avenue is needlessly costing their time and squandering King County Metro service hours.

This improvement may be the most impactful of the 20 specific bus priority projects that the MASS Coalition outlined in its plan for the Seattle Squeeze. By adopting this proposal, the City can demonstrate that it is prepared to continually improve city streets for transit over the five years of the Seattle Squeeze.

Several coalition members explained why they support this effort.

“For people working downtown who can’t afford downtown housing or parking, how about treating them like we really value their contribution to our city?” said Katie Wilson, General Secretary of the Transit Riders Union. “Bus riders deserve a fast ride into downtown.”

“As phase two of the Seattle Squeeze begins, we have seen the city make some limited moves in the right direction by establishing transit pathways on 5th and 6th Avenues and transitioning to all-door boarding on 3rd Avenue,” said Ken Anderson of Seattle Subway. “But these steps fall woefully short without a dedicated bus lane and signal priority on the busiest bus corridor in the United States.”

“Extending bus priority on 3rd Avenue is great for commuters, and it’s consistent with
the need to make dramatic reductions in carbon emissions,” said Rebecca Monteleone, chair of the Sierra Club’s Seattle Group. “With the bus tunnel closing to buses, this is a great time to make the change.”

Our own Stephen Fesler also highlighted why this effort could deliver system benefits. “Extra transit priority on 3rd Avenue will speed up buses and reduce delays for riders, improve system reliability, and free up service hours to be reinvested throughout our bus system,” he said. “This is vitally important at a time when Metro is already stretched thin with available buses and operators.”

Now is the time to put pressure on policymakers to finally grab this low-hanging fruit.