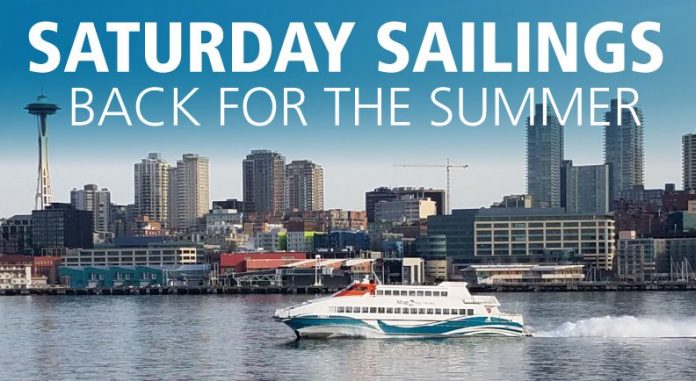 In a few weeks, Kitsap Transit will improve their fast ferry and foot ferry services on Saturdays. King County Water Taxi has already gone to their summer schedule as part of the March service change. And Intercity Transit flew under the radar beefing up Sunday service immensely.

Kitsap Transit service change in May

Likewise, the Kingston-Seattle fast ferry route will add Saturday service with sailings every 1.66 hours per direction. The first sailing will depart Kingston at 9.15am and the last sailing will depart Seattle at 11.25pm. Crossings take approximately 40 minutes. To support the new service, Kitsap Transit will operate Route 307 from the North Viking Park & Ride in Poulsbo to the Kingston Ferry Terminal. The last trip on this route, however, will be 6.56pm from the Kingston Ferry Terminal.

On Saturdays, Bremerton-Port Orchard foot ferry service will be extended until 11.45pm with the last departure from Bremerton.

Ridership on the fast ferries has been growing as service improvements have been rolled out. Last fall, Kitsap Transit made a big gamble on the Kingston-Seattle route. That seems to be paying off in the peak direction, but ridership in the reverse-peak direction is not as stellar as the Bremerton-Seattle route. Eventually, Kitsap Transit would like to provide fast ferry service from Southworth to Seattle.

In Thurston County, Intercity Transit implemented some noticeable service improvements in late March. Sunday service was increased a full 63% and additional trips were added on weekdays and Saturdays. With the improved service, the transit agency now has three primary corridors with 15-minute or better frequencies seven days a week. Routes 13, 12 and 42 (combined), 48, and 62A and 62B (combined) provide the high frequency corridors.

Other small revisions were made to service, including the alignment of Route 45 and time points.

In the fall, Intercity Transit plans to open a new downtown transit center in Olympia. The expanded transit center will add five bus bays and 11,000 square feet of space. The expansion will include a new waiting area, customer service area to support ticketing, and restrooms on the ground floor as well as high quality landscaping, public plaza areas, and public art. Upper floor space will support transit agency operations. The existing facility currently supports 10 bus bays. According to the transit agency, the expansion will cost about $8.4 million with more than half coming from federal grants.