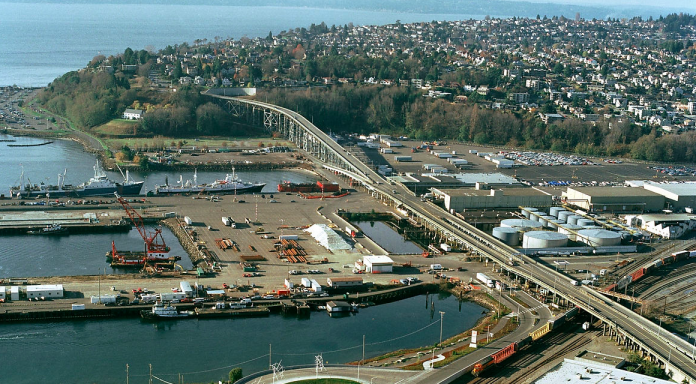 The Seattle Department of Transportation’s study on replacement options for the Magnolia Bridge, one of three routes into and out of Magnolia, came out last week. The current bridge is nearing the end of its operable life, and the study predicts dire consequences for vehicle travel times if the bridge is not replaced in some form and for not only Magnolia but the entire 15th Ave W corridor, including Ballard and Queen Anne. The study sets the stage for another large infrastructure project to get dropped on the city’s plate with no funding sources identified.

But what to make of the assumptions that form the basis for all of the modeling in the study? The picture painted of future traffic volumes does not actually appear to be realistic, and repeats the car-centric planning mistakes of the past that put level-of-service considerations in the center of the discussion. But let’s look at the alternatives that were considered and how those assumptions played into them.

Among the Alternatives, Armory Way Bridge Comes Out Ahead

According to the study, the course of action that ranked highest was construction of a new bridge connecting 15th Ave W and Thorndyke Avenue at W Armory Way, as well as reinforcing the eastern portion of the current Magnolia Bridge to continue to allow alternate access to Port of Seattle facilities and Expedia’s new campus at Smith Cove. It would also involve improvements to nearby streets (Thorndyke Ave W and 20th Ave W) and the creation of a new street bordering Port of Seattle property to connect the western end of the bridge to the Elliott Bay Marina and Smith Cove. The categories this set of projects ranked highest in were mobility, cost, and implementation (most of the construction could occur while the current bridge still stands). The Armory Way bridge package ranked highest among all for bike and pedestrian connectivity.

The new Armory Way bridge itself would cost only $45 million, with the bridge retrofit adding another $67 million onto the project cost. However, that doesn’t include right-of-way or design costs, so with the other project components the grand total is estimated at $266 million with a 30% contingency already included.

A full in-kind replacement of the bridge ranked just below the Armory Way bridge alternative. It scored well, unsurprisingly, on mobility (most of the traffic models extend current trends) and environmental impact (few new areas are impacted), and community support. But the full replacement scored lowest in terms of cost, with a top level estimate of $420 million.

A Magnolia bridge replacement could take up nearly half a levy the size of Move Seattle. It’s also over four times the cost of the Lander Street overpass, which was the recipient of the largest single grant ever awarded from the Federal government to a transportation project in Washington. The replacement also scored low on construction impacts, with high disruption occurring with a demolish-to-build schedule. It was, however, the highest ranked alternative for Sound Transit, the Port of Seattle, and the BNSF railroad company. The Armory Way bridge was ranked lowest by all three of those stakeholders.

The other two alternatives that were studied would not provide any new connection over the BNSF railway between 15th Ave W and Magnolia itself. Because the traffic models in the study project a large increase in traffic on 15th Ave W, the models predict a high amount of delays would be associated with utilizing 15th Ave W to get vehicles to the nearest bridge at W Dravus St.

Alternative 2 would create the connection between 20th Ave W and Smith Cove and retrofit the eastern portion of the bridge connecting 15th Ave W to Expedia as in Alternative 1. But rather than add another bridge at Armory Way, it would add additional lanes to W Dravus St.

Alternative 3 would do the same roadway widening on W Dravus St with the only other change being a reconstruction of the lower segment of the Magnolia Bridge only between 15th Ave W and Smith Cove, not Magnolia’s bluff.

The main category that these alternatives scored low on was mobility, which brings us to the traffic volume projections that form the basis of the study.

Flawed Study Not Grounded in Reality

There are a number of assumptions made in the study that are not grounded in reality. First, it assumes an increase in vehicle volumes of 0.4% every year through 2035, an increase of high single digits after 18 years. This is not reflective of the actual trend for vehicle traffic in Seattle overall. Since 2006, average daily traffic in Seattle has declined.

Second, it adds trips associated with all nearby projects on top of that assumed growth: Expedia, cruise ships, a million square feet of new industrial space at Terminal 91, growth at Fishermen’s Terminal, and a large number of new housing projects in the development pipeline. If you’re thinking that Magnolia isn’t known as a hotbed of housing activity, you’re right–most of those projects are in Ballard or Uptown. Some are in Belltown. Magnolia isn’t even a designated urban village, meaning single-family zoning predominates.

All of these wild assumptions combine to spell out armageddon for any scenario that fails to maintain or expand car capacity. That goes double for options that utilize 15th Ave W–the corridor every new resident from Belltown to Ballard will obviously be driving up and down every day during peak hours–even after the corridor gets Link light rail in 2035, apparently.

Volumes on 15th Ave W are projected by this study to increase by 33% over 2017 levels, reaching 4,800 vehicles per hour in both directions north of W Garfield St by 2035. That’s a similar volume level to the number of vehicles per hour that use the SR-99 tunnel currently and over a thousand more vehicles headed northbound during afternoon peak than currently use the street.

In other words, the traffic modeling concludes that even if another Magnolia Bridge is built and things remain exactly as they are now, it will take drivers 32 minutes to get from Elliott Ave W to the Ballard Bridge during the afternoon commute. Take out the bridge and do nothing? That will go to 66 minutes. Yes, that’s right, people will apparently spend an hour in traffic with a light rail line running between Ballard and Downtown literally right next to them. That amount of time goes up to 126 minutes to get out of Magnolia without the bridge.

The idea of “no build” is really not addressed much in the report, but the dire travel times spelled out by the flawed traffic data are tucked away in the report. Bizarrely, the model shows a nine-minute travel time heading to Ballard during the morning peak, heightening the incredulity of the numbers.

Since the Magnolia Bridge study turned out to be a study supporting adding four or five lanes of traffic to 15th Ave W, it’s hard to take its conclusions seriously. The mobility assumptions that went into rating the possible alternatives were weighted 75% on general vehicle access and only 25% on everything else, including 10% transit, 10% bike and pedestrian access, and 5% freight. That is not an accurate balance for the Seattle of 2035, or even the Seattle of 2019.

What is missing from the report is the environmental impact of not reducing vehicle travel dramatically by 2035, when even our very aggressive electric vehicle goals still predict most cars will run on fossil fuels. The carbon emissions associated with six-minute travel times between Magnolia and north downtown for motorists are left unaccounted for, with vehicle delay at the top of the list of worst-case outcomes. Also unaccounted for is the safety impact of streets designed to accommodate that much traffic during peak periods or the health impacts overall if the system continues to encourage that much driving.

With no funding source for any future Magnolia Bridge replacement identified yet, the context around how Magnolia and Seattle as a whole would adapt to the different scenarios is just not correctly accounted for in this long-anticipated report. The conclusions it reaches should carry very little weight when leaders are debating the next course of action for the bridge.