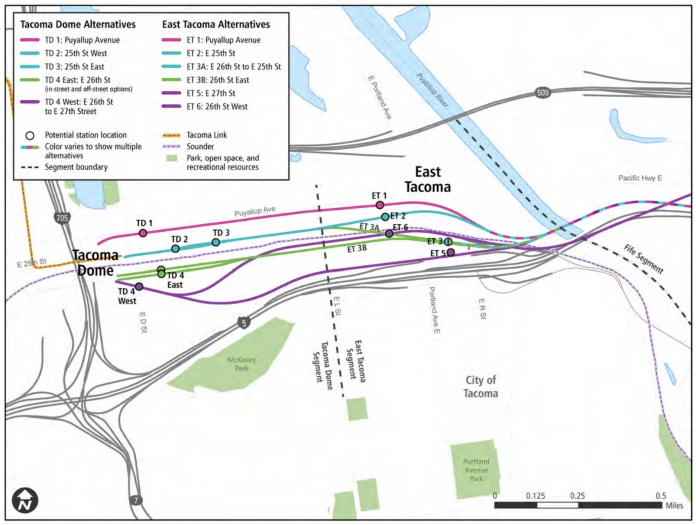 Both the Tacoma Dome Link Extension (TDLE) and Ballard/West Seattle Link Extension projects are moving forward with preferred alternatives for environmental review. The Tacoma Dome extension is the latest with the Sound Transit Board of Directors poised to recommend approval of similar segment options of the selected preferred corridor alternatives by the Elected Leadership Group.

Officials hope that limiting the options for environmental study will keep light rail expansion plans on schedule–if not ahead of it–since studying a plethora of options is more time-consuming. Link service to West Seattle and Tacoma Dome is slated to start in 2030, while Ballard Link is tabbed for 2035.

TDLE involves four segments stretching from Federal Way Transit Center to Tacoma Dome Station. During the early scoping process, various alternatives had been developed for each of the segments: nine for South Federal Way, five for Fife, six for East Tacoma, and five for Tacoma Dome. Policymakers further whittled down to no more than four alternatives by segment for additional evaluation, all of which would be grade-separated.

For South Federal Way, policymakers have identified the SF 2 West option as the preferred alternative. The South Federal Way station would be centrally located along the commercial node of Enchanted Pkwy S. The general alignment of the segment would otherwise run along I-5. The SF 2 East and SF 8/9 options will also be studied.

For Fife, the Fife 3B option has been identified as the preferred alternative. The Fife station would similarly be centrally located just north of 15th St E. The general alignment of the segment would otherwise run along SR-99 west of the station. The Fife 3A option will also be studied to tie into South Federal Way segment.

The Sound Transit Board of Directors will approve alternatives for further study at the end of month. The environmental review process is expected to run through 2022 with the a Draft Environmental Impact Statement due out in early 2021.

In May, the Sound Transit Board of Directors followed the advice of the Elected Leadership Group and System Expansion Committee Board in selecting several Ballard and West Seattle segment alternatives for further study in the environmental review process. The preferred alternative comes in two flavors for the corridor tails in Ballard and West Seattle while the segments closer to Downtown Seattle, Uptown, Chinatown-International District, SoDo, and Smith Cove are the same. By segment, the preferred alternative shakes out as follows:

The environmental review process is expected to run through 2022 with the Draft Environmental Impact Statement due out in late 2020.