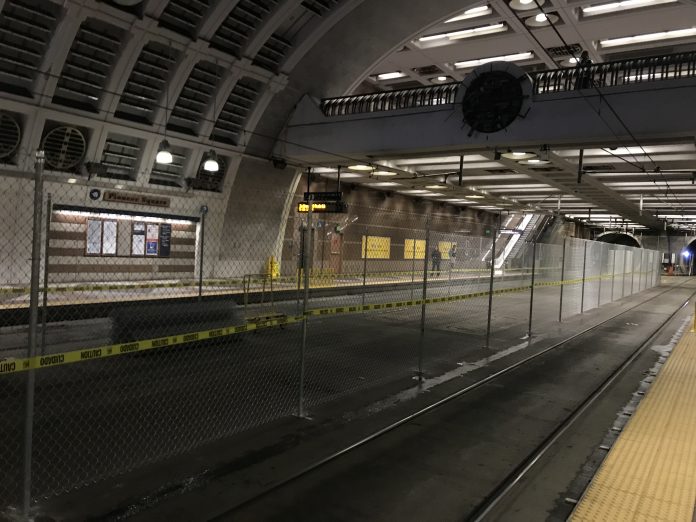 For three weekends this fall, Sound Transit will fully close light rail stations in Downtown Seattle to prepare for the Connect 2020 project, the transit agency announced last week. Replacement bus service will bridge the gap between Capitol Hill Station and SODO Station with stops on or near normal station locations. Trains will still operate between University of Washington Station and Capitol Hill Station as well as SODO Station and Angle Lake Station.

The service disruptions will occur on October 12th, 13th, 26th, and 27th as well as on November 9th and 10th. According to the Sound Transit, the weekends were chosen because no Seahawks and Husky football games are scheduled those weekends (though there may be Sounders games if they make the playoffs). The Mariners penchant for missing the playoffs does have the silver lining of assisting with October transit work.

As we reported in February, Sound Transit needs the weekends to install a temporary center platform at Pioneer Square Station. The platform will be built out of concrete and include installation of safety devices and additional lighting. To facilitate work, crews will need to power down the overhead catenary wire at stations throughout the Downtown Seattle Transit Tunnel.

“This unavoidably disruptive period is the inconvenience we all must face so we can enjoy the extraordinary convenience of traveling to ten new light rail stations across the Eastside in 2023,” Sound Transit CEO Peter Rogoff said in February. “By scheduling this construction during our slowest weeks for light rail ridership, we aim to inconvenience the fewest number of riders possible.”

All of this work is being done to help facilitate the tie-in construction of the East Link light rail extension. Sound Transit did not originally design the Central Link project with the specific tie-in tracks near International District/Chinatown Station when it was built. Therefore, in order to facilitate seamless access through Downtown Seattle, the new track connections are required. This will allow Sound Transit to launch the Blue Line in 2023 to serve stations between Northgate and Redmond via the Downtown Seattle Transit Tunnel. The Red Line will operate largely along the same corridor from Northgate but split just south of International District/Chinatown Station to serve the Rainier Valley, airport, and terminate at Angle Lake Station.