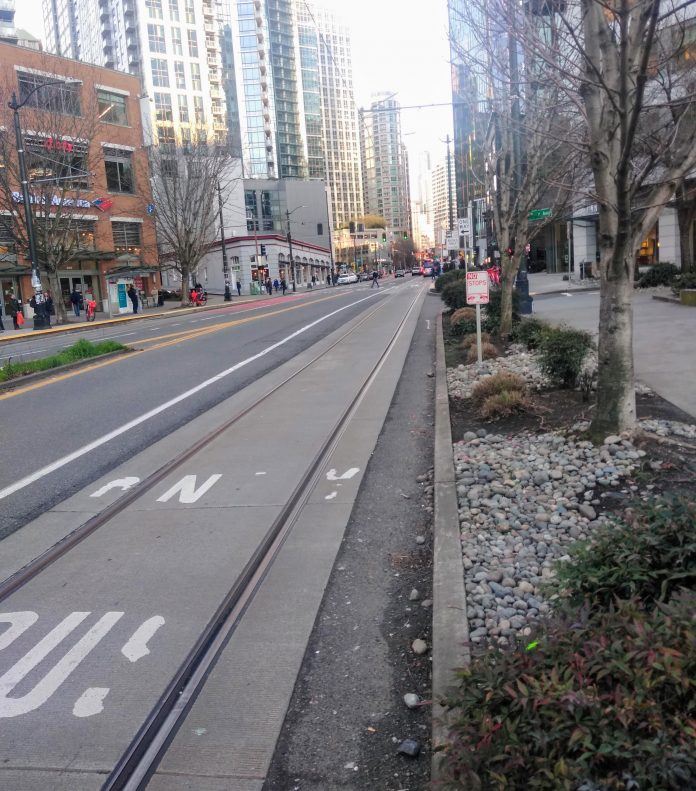 When the South Lake Union streetcar’s station platforms were designed in the early 2000s, it was not imagined that streetcar stops along Westlake Avenue would also end up accommodating several other very frequent bus routes. But as demand for transit in South Lake Union grew, that’s exactly what happened. In 2016, the C Line was extended to run up Westlake on newly created transit-only lanes and the Route 40 was moved there as well.

Accomplishing this wasn’t just about moving the buses; the stations had to be enlarged so that a streetcar and a 60-foot articulated bus could stop at the same platform. But not every platform could be enlarged due to where it was located. The southbound streetcar stop at 9th Avenue and Westlake Avenue sits on a relatively short block sandwiched between Blanchard Street. So it remains about half of the size of the stop across the street, which was beefed up to accommodate more buses.

That means any time two transit vehicles arrive at the stop, the second in line has to wait for the first to clear the platform before it’s able to access it, adding dwell time and delaying the entire route.

Now the Seattle Department of Transportation (SDOT) is planning a fix to alleviate this bottleneck for the Seattle Streetcar, the Route 40, and the C Line. As part of its 2020 transit spot improvements, the department plans to extend the transit stop north, adding a loading platform on the opposite side of Westlake Avenue’s intersection with 9th Avenue. This will be the first time that a transit stop will exist on either side of an active intersection.

9th Avenue is a one-way street in this area, with a direct connection between Denny Way and Westlake Avenue in front of the 2201 Westlake building. Many drivers use the short stub of a street to cut around the crowded Denny and Westlake intersection, despite the fact that the street functions almost entirely as a driveway for the office building. In order to better communicate to people driving through there that there is a extended transit stop, SDOT plans to add a raised crosswalk parallel to Westlake Avenue, connecting the two sections of the new transit stop.

Another option here would have been closing 9th Avenue to through car traffic entirely. Creating a 9th Avenue pedestrian corridor where traffic currently flies through was a missed opportunity when the 2201 Westlake building was constructed. Now, with buses unloading and loading all day on either side of 9th Avenue, opportunities for conflicts between drivers and people walking and rolling will increase.

A pedestrianized 9th Avenue would also be essential if Westlake Avenue was converted into a car-free corridor, an idea that is as unacknowledged by city leaders as it is appealing to urbanists. Former Mayor Mike McGinn has proposed the idea of removing Westlake from the city’s Car Master Plan as a way of making way for transit, walking, and biking. While we’re making spot improvements that have a huge impact on thousands of transit riders per day, as this streetcar stop expansion will, we should step back and look at the bigger picture. It’s the only way to keep the status quo from claiming another day.