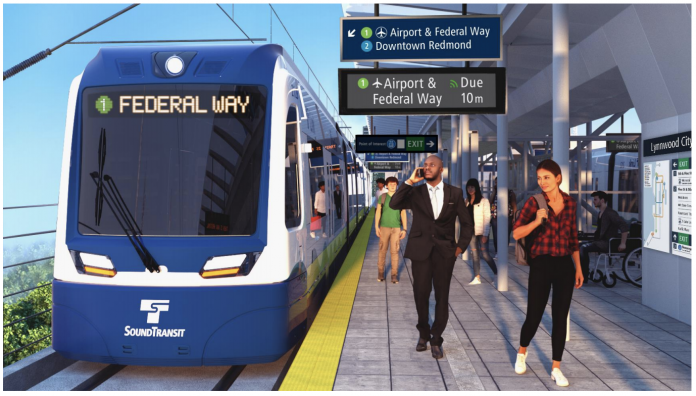 Light rail is not the only thing getting a rebrand by Sound Transit next year. In an announcement on Thursday, the transit agency outlined a full rebrand of current and future light rail, commuter rail, and bus rapid transit services. Chief among them is the Central Link light rail line that will become the 1 Line. The full suite of services will use an alphanumeric naming approach with color as a secondary means of identification. Sound Transit hopes to launch the new branding in 2021 when the Northgate Link light rail extension opens.

This service rebranding effort was spurred on from public outcry in the fall that shortly followed the launch of color-based branding of light rail. In September, Sound Transit began referring to Central Link as the “Red Line” and Tacoma Link as the “Orange Line”. The rider community quickly responded by raising concerns that the Red Line name evoked an association with “redlining”. Nationally, redlining was an institutionalized housing and economic practice used in the mid-20th century to racially segregate people of color. But this practice was also used in Seattle, particularly in communities now served by Central Link like Beacon Hill and Mount Baker.

The new service branding approach is much sleeker and brighter than the track Sound Transit was on last year. Pulling from international best practices, the transit agency has sought an alphanumeric approach paired with colors and shield shapes. The latter aspect is particularly noticeable with rail-based services using circle shields and bus-based services using square shields.

Initially, Sound Transit plans to use numbers for the first four regional light rail lines while Tacoma Link will use a letter to differentiate it as a local service. All of these will be paired with bright colored shields to emphasize their importance in the Sound Transit service pantheon. The first line to get a number will come next year.

For the future Stride bus rapid transit lines opening in 2024 or 2025, Sound Transit plans to use a common mixed alphanumeric naming convention. All Stride lines will include an “S” prefix followed by a number (i.e., S1, S2, and S3). The “S” hints at the name of the service type followed by the actual line identifier. The shields for Stride will be square with a gold color.

In a factsheet, Sound Transit has explained why the numeric approach will be used for light rail:

Numbers provide an intuitive, easy to remember system for all riders. Arabic numerals are the only identifier instantly understood in languages using Latin, Cyrillic, Chinese, Japanese and Korean characters, etc. Even for languages that do not use Arabic numerals, many international transportation applications (such as airport gates) still use Arabic numerals. Low numbers also imply priority and importance to riders, and this is appropriate to Link light rail as a fast, frequent, reliable and high-capacity service.

Ideally though, Sound Transit says that the transit agency would go with just letters for light rail if “designing the system from scratch.” The problem with that, however, is that King County Metro already uses letters for its premier bus rapid transit service: RapidRide. Numbers are not without their own problems though since regular bus routes typically are numbered. But Sound Transit believes that since route numbers are widely replicated across local transit agencies without confusion to riders, the numeric approach on light rail should work for riders. Sound Transit will still be breaking the letter rule for commuter rail and bus rapid transit services, but those cases are narrow and should also avoid conflict with RapidRide services.

Sound Transit has also explained why light rail is not going back to a color-based approach, indicating that there are several complex but interrelated reasons:

While line colors are a simple and strong way to differentiate lines, removing the color red creates long-term problems as the system grows. Removing red while retaining color-based names would increase reliance on secondary or non-standard colors, reducing options for parallel or intersecting lines that maintain the required 70% color contrast for individuals with color vision deficiencies. For instance, displaying orange and gold together would not pass this test. Non-standard color names (Teal, Aqua, Magenta, etc.) are more complex and harder to remember, especially for those with limited English proficiency.

Branding services with thematic or honorary names, such as the “Chinook Link” or “Duwamish Line”, was also ruled out because those types of names could be less accessible to visitors, occasional riders, and people with limited English proficiency.

Rebranding of the light rail system will take time because it is expensive to revise media across system assets. Sound Transit is holding off until next year to move ahead with the first renaming and rebranding to align with the opening of the Northgate Link extension when materials will need to change anyway. Assuming that projects are delivered on time–and the jury is out on that one now that the novel coronavirus epidemic has deeply affected the economy–Sound Transit plans deploy the new light rail branding as follows:

As a next step in the system branding process, Sound Transit should consider how it can use the new service naming conventions to improve system navigation. One way to do this is by giving each station a unique identifier so that riders can know where they fall in the system when at a station.

In Seoul, the subway system has many lines and assigns unique station codes to each station on a line. Stations served by multiple lines therefore have multiple station codes. Seoul’s Line 1 is somewhat complex because it has several branches, but all stations on the line have a three-digit number–some with a prefix depending upon branch–with “1” leading the number series. Generally, station code numbers increase sequentially, starting from a terminal station on one end.

Station codes can help riders mentally place themselves based upon how many station codes exist on a line. For example, if there are 25 stations on a line and a rider is in the middle of a line, that rider may be at station 112 and want to go to the 23rd station on the line. That rider then can easily calculate that the train is 11 stations away from the intended destination.

In a more complex network, riders may need to make transfers and use different lines to reach their destination. Station codes can help in that situation, too. Riders can think of stations using the codes instead of trying to remember names. Getting from Station 114 to Station 313 via Station 122 could wind up being a lot easier to keep track of than getting confused over which “University” station to transfer at.

Another improvement that Sound Transit could consider as it rebrands lines is pictograms. The station pictograms that the light rail system currently uses is not memorable and falls short of best practices. If pictograms are going to be kept on station media and trains, rethinking the whole approach to align with service rebranding may be worth the effort. Nevertheless, the overall rebranding from colors to line numbers and letters is a big improvement that should set the Sound Transit system up for success in the years ahead.