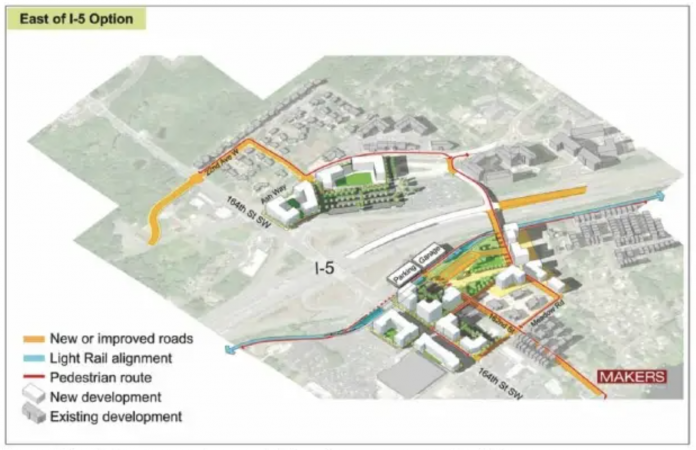 Snohomish County has formally identified preferred locations for two light rail stations, between Everett and Lynnwood, planned in urban unincorporated areas as part of the county’s Light Rail Communities program. This comes years ahead of any formal decision by Sound Transit, which will ultimately be responsible for financing, constructing, and operating the stations. Now the county is earnestly moving into the next planning phase to develop a subarea plan. This will determine how the county plans to serve and develop the preferred station location areas, all but forcing the hand of Sound Transit to stick with the plan.

Light rail is slated to arrive as soon as 2036 in Everett when Link is extended north of Lynnwood–assuming those timelines survive the recession. This will deliver at least two stations in urban unincorporated areas of Snohomish County, serving the Ash Way and Mariner neighborhoods. Both neighborhoods are currently served by transit centers, with Ash Way being the more prominent one for Sound Transit and Community Transit. A third station, provisionally denoted as an infill station, could wind up serving the urban unincorporated area near Pacific Highway (SR-99) and Airport Road if additional funding is identified.

The Snohomish County process to identify preferred station locations started in 2017. At first, a shortlist of 14 possible station locations split between the two station areas were circulated, before being whittled down to a more reasonable subset to draw clear contrasts.

Last summer, Snohomish County entertained two distinct station area concepts for each station planned at Ash Way and Mariner. These station area concepts came with significant tradeoffs in station location, local street networks, station accessibility, and potential for transit-oriented development. Though these concepts were still very preliminary, amounting to design charrettes, they were formative in helping the public, planners, and officials to weigh their potential strengths and weaknesses. Ultimately, the summer process allowed people to choose which station concepts and concept elements that they liked and disliked, and even offer their own ideas.

In a joint resolution approved by Snohomish County Executive Dave Somers and Snohomish County Council in February, the officials support the Ash Way station being located east of I-5 (East of I-5 Option) near 164th St SW–a major east-west corridor–and Mariner station being located on a new 130th St SW (130th St Option) between 8th Ave W and 4th Ave W. Both options would maximize the potential for transit-oriented development (TOD) that could grow around the stations over time. The competing station location concepts that had made the cut last summer but not final cut alternatively placed stations in Ash Way west of I-5 (Ash Way Park-and-Ride Option) essentially where the existing transit center is today and Mariner on 128th St SW (8th Ave W Option) between 8th Ave W and 4th Ave W.

Prior to adoption of the joint resolution, the Snohomish County Council was briefed on the preferred station locations. Jay Larson, a Snohomish transportation planning program manager, highlighted why the 130th St Option rose to the top for Mariner. “[Bus rapid transit] travel time was 10% faster,” he said. “It’s a marginal increase, but it does make a difference.” On the metrics of cost, ridership, TOD (approximately 19,423 dwelling units), Larson said the 130th St Option basically was the same as 8th Ave W Option. Where it performs a little better is with walkscores (rated at a 65), access to the Interurban Trail, and keeping the station off of a very busy and loud street. Moreover, the public and public agencies were decidedly in favor of the 130th St Option, he said.

In prefacing his discussion on the strengths of East of I-5 Option, Larson said that it was initially not the obvious choice. “We decided to go forward with it because we were interested to see how it would rank and the more we looked at it, the more evaluation, the more advantage we saw about this location,” he said.

In sum, the big pluses for the East of I-5 Option are a much higher TOD potential (about 17,500 dwelling units compared to 12,000 for the alternative), better walkscore (ranked at a 62), direct access to the Interurban Trail, and possibility of reducing congestion on the 164th St SW/I-5 interchange, Larson said.

An obvious challenge that the East of I-5 Option will encounter is bridging and trench. Since the main alignment of light rail will primarily be located on the west side of I-5, the station location would require that Sound Transit to construct several overpasses or underpasses across I-5. The local topography and right-of-way width, however, may make this a preferable approach for cost and local impacts despite the risk and disruption that substantial bridging can entail. Larson mentioned that the additional cost is probably marginal, as much as 5% more, for an east-of-I-5 alignment and station.

Discussion then pivoted to the subarea planning process, dubbed the “Urban Core Subarea Plan”, which would be the first subarea for the county to tackle for a specific geographic area since 2002. “We felt that this area really demanded and warranted a more detailed plan,” said David Killingstad, a Snohomish County principal planner. He added that this “could really set the table and guide the vision for what the community wants, but also [ensure] that we’ve taken full advantage of what light rail can do for here.” His presentation highlighted nine specific topics that the subarea plan would touch on for both station areas, including big tick issues like zoning, housing, transportation, and parks. Killingstad likened this process and document as a “mini version of the comprehensive plan.”

In terms of land use and zoning, Killingstad said that the county was looking at the use of form-based codes, which would be a tremendous departure from the current development code. This type of code is much more focused on the form of development rather than uses. Paired with this also might be incentive and inclusionary zoning strategies, which could deliver more affordable housing in the county.

The station areas already contain a variety of zoning types, including commercial, multifamily, and mixed use zones of varying degrees of densities. The Urban Center zoning in Ash Way allows for the highest intensity and unique development standard characteristics. In some cases, structures are allowed to be up to 125 feet tall, though this is constrained by floor area limitations and other requirements. Land use and zoning changes in these areas could allow for full reexamination of what is appropriate for these transit-oriented communities.

As a first step in engaging the public on the next phase of the planning process, Snohomish County has opened up an online survey to gauge priorities and demographic data for subarea planning. That survey will run through May 8th.

The joint resolution makes several other critical public policy statements. First among these is using the preferred station locations for planning purposes as the county enters its planning process for major updates to the Snohomish County Comprehensive Plan. In 2023, the county will need to adopt substantial changes to the comprehensive plan that accommodate growth and development in the subsequent 20-year planning period. The calculus of growing transit-oriented development around the preferred station locations could be a key component of this. Likewise, Snohomish County supports county efforts for subarea and comprehensive planning around the provisional infill station and urges Sound Transit to conduct planning of the station in the Everett Link Extension process.

Nevertheless, none of this guarantees that those preferred stations will become Sound Transit’s preferred station locations or even make it into the EIS process. Those decisions lie solely with the Sound Transit Board of Directors, but significant weight has traditionally been afforded to recommendations by local jurisdictions in station locations, station access and design elements, and even alignments. This has been especially the case for local jurisdictions that have been proactively and cooperatively planning around those recommendations.

In terms of Sound Transit’s process, the alternatives analysis is due to begin this year and wrap up in 2021. In 2022, the Sound Transit Board of Directors could pick a preliminary preferred alternative for the EIS process in order to speed up analysis. But a Final EIS is not expected to be completed until the end of 2024, even if it gets underway in 2022, and opening of the extension could be more than a decade away once a final decision is made. Uncertainty surrounding the COVID-19 pandemic and its economic impacts could significantly alter the kind of alignment and station project scopes that get picked and the timing of project completion over the course of the next few years if things continue to worsen on the horizon.