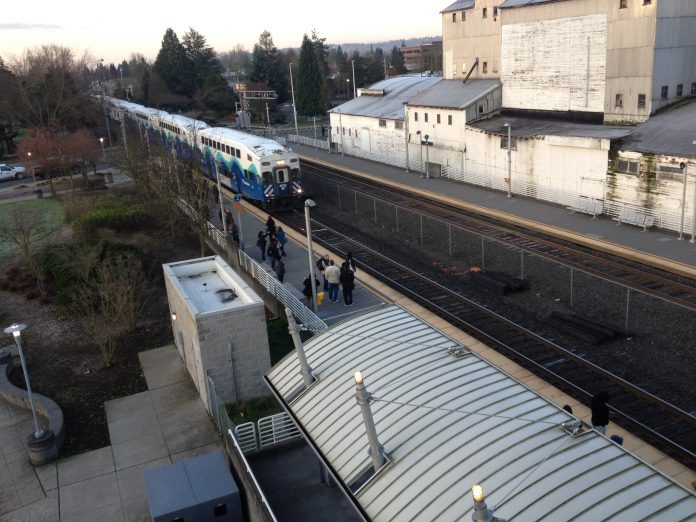 In late April, Metropolitan King County Council formally identified a locally preferred alternative for the RapidRide I Line, which is billed as opening in 2023. The RapidRide corridor would stretch from Renton to Auburn via Kent, primarily running along SR-515, SR-516, and East Valley Highway. In preparation for the RapidRide line, the King County Council also approved a major bus route restructure in the Kent, Renton, and Auburn area set to go into effect in September. This bus restructure will be the biggest of its kind for the area in about 10 years.

The RapidRide I Line locally preferred alternative (LPA) specifies a 17-mile long bus rapid transit (BRT) corridor serving the Kent, Renton, and Auburn communities. The route is planned to serve each city’s main downtown core as well as residential, commercial, and industrial districts between. Much of the corridor is surrounded by low density suburban residential development a block or two beyond the corridor, but the immediate streets that buses will operate along do have noticeable medium density residential development and business activities. Key community assets, such as schools, medical services, community centers, and parks will be directly served. Valley Medical Center, which is the largest employer along the corridor, will also benefit from the service, providing a reliable transportation option for nurses, doctors, and other staff.

The service plan identifies a fairly robust level of service using diesel-electric hybrid buses 20 hours per day. At peak hours, Metro plans to run buses at 10-minute frequencies. At off-peak hours, this would drop to 15-minute frequencies. As a RapidRide service, Metro will use all-door boarding buses, off-board fare payment, a menu of speed and reliability improvements, such as business access and transit lanes and transit signal priority. Off-board fare payment is made possible by installing RapidRide stations instead of traditional bus stops that include ticket vending machines and ORCA card reader kiosks.

In total, the LPA identifies 41 station pairs and will provide direct connections with other local routes as Sound Transit’s Sounder commuter rail, ST Express bus service, and eventually Stride BRT. Overall, the station pairs do represent some stop consolidation and elimination to keep buses moving five or more blocks at a time before stopping again. When the RapidRide Line opens in 2023, Metro forecasts that ridership will range from 9,000 to 12,000 passengers per day.

Prior to approving the RapidRide I Line LPA, councilmembers pressed King County Metro staff on the scope and implication of the LPA. Councilmember Claudia Balducci (District 6-Bellevue) was especially concerned about the stated level of service that was being committed to in planning documents in light of cratering revenues. Though at the time, a specific forecast on Metro’s revenue streams had not been publicly released, she felt that committing to such a level of frequency early on could hamstring the county going forward if transit cuts became inevitable from the economic outfall of COVID-19.

Metro staff, Gregory McKnight and Chris O’Claire, reassured Councilmember Balducci and other councilmembers that a specific service plan was as necessary part of the LPA process in order to move forward in pursuing a $56 million Small Starts grant from the Federal Transit Administration (FTA). The requirement had not been as prescriptive in past RapidRide Small Starts grant application processes, but McKnight said that there was some level of flexibility in ultimate service level through the application negotiation process and that the LPA does not set a permanent minimum standard. The FTA fundamentally wants some level of assurance that financial investments in capital transit projects will not later be squandered like some transit agencies have by entirely cancelling or decommissioning service after only operating for a few years.

The timing of project delivery is 2023 with a construction start in 2022, but at this point everything is up in the air with COVID-19. Delays in capital outlays seem increasingly likely since a countywide ballot measure to fund more bus operational and capital investments has been shelved and is nowhere in sight. Add to that, a report on Monday to the King County Council indicated that a budgetary shortfall of $185 million this due to declining sales tax revenues. Some of this may be offset by $242.8 million in federal grants for operations and other expenditures to respond to COVID-19 impacts.

As a first step to bringing the RapidRide I Line online, Metro is restructuring service in the Kent, Renton, and Auburn areas, similar to what was contemplated last fall. A key change to build ridership in advance of the RapidRide I Line is unifying portions of Routes 169 and 180 to become new Route 160. This route will essentially follow the RapidRide I Line alignment. The unified route will also force Metro to create two additional routes with new Route 161 serving the Burien-to-Downtown Kent corridor and new Route 184 serving neighborhoods south of Auburn Station. Over a dozen other routes will be restructured this fall alongside Routes 169 and 180. This includes Routes 105, 148, 157, 158, 159, 164, 166, 168, 192, 906, 908, 910, 913, 914, 916, and 917.

The bus restructure comes with a mix of route revisions, deletions, and additions. In the deletion category, Metro will eliminate Routes 158, 159, 164, 166, 158, 169, 180, 192, 908, 910, 913, and 916. While this may seem like a bloodbath, most routes are simply being replaced with revised or new routes to optimize local service and feed new Route 160 and transit centers. There a several cases though like Routes 158, 159, and 913 where service is just too low-performing and duplicative of other options, including new options.

In September when the bus restructure rolls out, service levels may be different from what is planned, given that the COVID-19 epidemic has depressed rider demand and may begin to have significant financial stress in operating higher service levels.