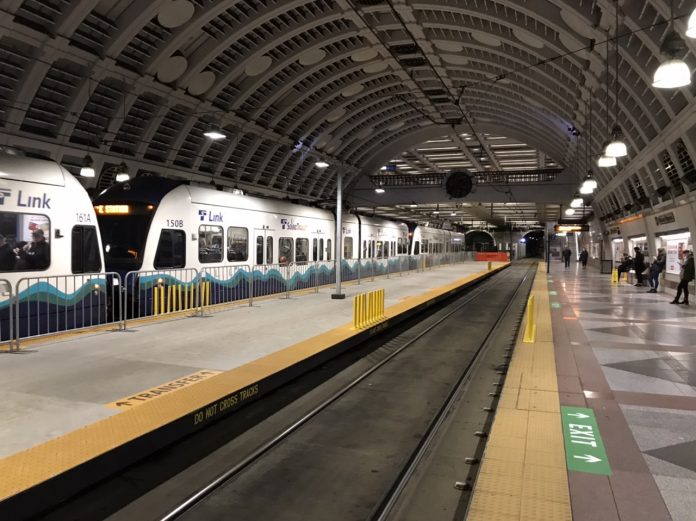 The Sound Transit Board of Directors are punting on a realignment program of capital expansion projects for at least a year, allowing current projects to keep moving full speed ahead. In April, the board was first briefed on the likely need to consider changes to the capital program to deal with financial constraints from the Covid-19 pandemic economic fallout in order to keep the overall Sound Transit 3 program affordable. Peter Rogoff, Sound Transit’s Chief Executive Officer, had said that a similar realignment effort during the Great Recession lasted 18 months, but this time might be different requiring swifter action. That sense of urgency appears to have evaporated, perhaps due to a mix of boardmembers wanting to deeply explore options and some optimism about pandemic economic recovery.

At Thursday’s board meeting, boardmembers adopted Chair Kent Keel’s proposed motion establishing realignment criteria for Sound Transit 3 capital expansion projects without change. There had been considerable debate at a previous meeting over the motion. Boardmembers were highly critical of several criteria included in the draft motion, including the criteria for “project tenure” that could weight supposed longer-waiting projects higher than newer ones. Keel’s motion had been forwarded to the full board without recommendation to end debate and move it for final action. The success of the unchanged motion probably had much to do with a revised timeline for program realignment and the fact that many projects could rank highly on the overall set of criteria.

The motion establishes eight criteria that Sound Transit staff will use in developing realignment scenarios, which includes the following:

The timeframe for program realignment is expected to stretch well into 2021 with no final board action until July 2021 under an agreed upon path forward. The board intends to take a prudent and slower path to making program realignment decisions so as to “not over-committing resources or over-correcting the program before the ramifications of the recession and possible government responses come into clearer focus.” Whatever is decided that summer will be used to develop the 2022 Transportation Improvement Plan.

In the interim, Sound Transit and the board will use “placeholder assumptions” for all projects future projects that are not currently under construction or scheduled for commencing construction in 2021 when developing the 2021 Transportation Improvement Plan. That means all new projects will be treated the same with a common period of delay identified for construction start, which is expected to be around five years. This period of delay, if any, will be updated after a formal program-wide realignment plan is adopted next year by the board, which will be reflected in the 2022 Transportation Improvement Plan.

By end of year, the board will be responsible for picking which projects will be baselined–which means authorizing bid advertising, spending commitments, and defined project timelines–in 2021 to prepare them for construction. The board will also continue to make many decisions on project funding and approval between now and adoption of the program realignment plan, which should be based on existing Sound Transit 3 program and agency policies, objectives, and criteria.

As contemplated in the agreed path forward, the 2021 budget will fully fund all early design, environmental review, and right-of-way acquisition functions of current projects that are not baselined by 2021 to ensure that they remain shovel-ready. This will allow projects to be completed at an earlier date if additional funding (e.g., local, state, or federal) resources are obtained or the economic climate improves enough to increase tax collection.

In developing the program realignment plan, Sound Transit will use the following process:

Throughout the process, the agency will conduct public outreach to inform decisions.

As a companion to Chair Keel’s motion, King County Executive Dow Constantine was able to get his motion passed directing Sound Transit staff to prepare realignment scenarios that include other capital financing options. The scenarios would need to consider different outcomes where state funding, federal funding, or increased debt capacity could support ST3 capital program objectives. At the previous meeting, Constantine seemed fairly optimistic that additional federal funding could be on the horizon. That presumably is due to the current political climate, which is very likely to bring a more favorable Congress and Presidency next year.

The pressure to make a nearly immediate decision on the fate of Sound Transit 3 projects was never a highly popular strategy among many boardmembers. This one-year breather will allow sufficient time for the agency to thoroughly research, develop, and scrutinize options for board consideration and then refine them rather than hamfistedly trying to do so in a matter of mere months.

The reality is that there is adequate debt capacity and revenue to proceed ahead with smaller scope projects for now, making the urgency to act for realignment a relatively moot matter this year. Most projects will continue on the current early planning and design trajectory during the interim, which represent very small costs to total project lifetime budgets. On top of this, the economic outlook and national political environment could turn more favorable in the year ahead. So the agreed path forward may seem a reasonable balance for now until a final decision is made on the fate of Sound Transit 3.