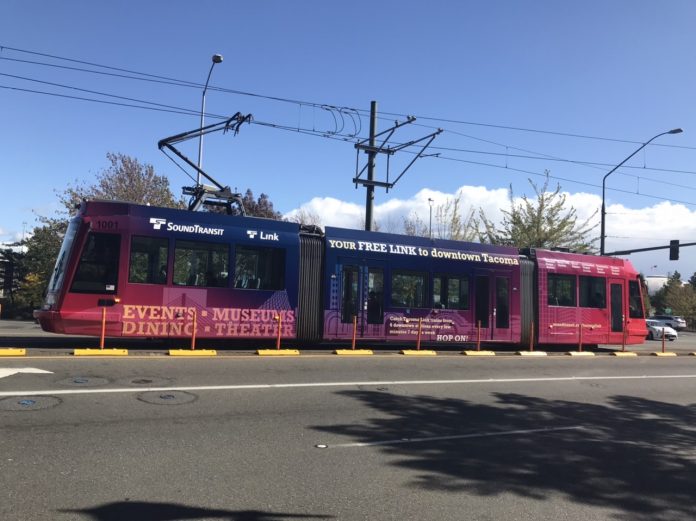 Sound Transit has allocated additional funding to the Tacoma Link extension project to shore up the budget. Costs have primarily risen from unforeseen right-of-way ground conditions. The agency’s board of directors also approved a betterment agreement with King County for a portion of the East Link corridor and were briefed on a federal grant that was awarded to develop a model transit-oriented development code for local jurisdictions.

The Hilltop Tacoma Link extension has been plagued with construction challenges since work began in 2018. The latest hiccough has been significant rework of right-of-way conditions along the line. Crews have encountered buried utilities, contaminated and hazardous materials, old track slabs, and other problematic materials in the ground that were unanticipated during the process of digging into the ground to lay the new trackbed and other streetcar facilities. That has meant removal of these features and more utility relocation than had been originally planned.

Another significant cost for the project is overall project administration. This additional work has slowed the construction process, meaning that additional agency staff time, design staffing, and construction management staffing is required to complete the project, though this will not delay final completion and startup of the line.

Several boadmembers, including Tacoma Mayor Victoria Woodards and Pierce County Executive Bruce Dammeier, expressed disappointment in the disruptions that businesses have had to endure as part of the at-grade right-of-way excavation and track installation. The longer period of construction during the pandemic has only exacerbated challenges to businesses. Peter Rogoff, Sound Transit’s Chief Executive Officer, acknowledged that this project has been particularly problematic for the agency, calling it an “outlier” and blaming faulty as-builts of the streets and poor contractor compliance. He was clearly frustrated by the project issues to date.

The project has essentially exhausted all of the budgeted contingencies. Thus, additional funding is needed to complete the project. The board authorized a budget increase of $35.4 million, representing a 16% increase over the budget baseline of $217.3 million. As part of this, $27.4 million of the increased budget will be dedicated to the Walsh Construction Company II, LLC contract. Walsh is the primary contractor of the project.

As a result of these challenges, agency staff are recommending better risk control practices in the future for at-grade construction. First and foremost, the agency plans to revise engineering procedures so that investigations below ground are fully carried during project planning and design phases. On the construction side of things, this could mean changing the type of contracting used so that risk is not solely borne by the agency, increasing contingency budgets, and offering incentives to contractors to reduce community impacts.

Despite the construction challenges, the project is still on schedule for opening in May 2022, though virtually all of the project float will be consumed by the extended construction period. Sound Transit reports that 85% of utility relocation and upgrades have been completed and overall project completion is at 56%.

The Sound Transit Board approved execution of a betterment agreement with King County that enhances the Eastrail Trail in Bellevue along the East Link light rail corridor. King County had requested several changes along the corridor since the trail and light rail projects overlap. A major piece of the Eastrail Trail project in Bellevue is a new pedestrian and bike bridge over NE 8th St, which is the focus area for the betterment agreement. King County has requested that Sound Transit make three key changes as part of the light rail project to better facilitate the trail, which include:

The total cost of the betterment agreement is $340,000, which will be paid by King County. The Eastrail Trail is planned to run from Woodinville to Renton along the old East Rail Corridor. Significant portions of the corridor have opened in recent years, including in Bellevue and Kirkland. In Downtown Bellevue, the Grand Connection over I-405 will eventually link the Eastrail Trail with the city center.

Peter Rogoff briefly mentioned to the board that the agency had secured a $2 million grant for development of a “model code.” The code will be focused on creating ideal transit-oriented development regulations that local jurisdictions along the future Everett Link light rail extension can use, and help expedite the permitting process, which could benefit light rail delivery. Sound Transit plans to coordinate with Snohomish County, Lynnwood, and Everett as well as the Puget Sound Regional Council to developed the model code. Policies and regulations that could come out of the effort, include things like form-based land use codes, inclusionary zoning, parking reform, and other transit-supportive regulations and programs.

Over the years, Sound Transit has become a major landowner, leading to the agency to manage and surplus heaps of property. Built into state law, the agency is required to surplus much of acquired properties that are no longer necessary for transit purposes. And along the way, Sound Transit has built or planned more than 1,300 housing units–most of which are affordable–and some complementary commercial uses. Thus, Sound Transit does have an interest in ensuring that development regulations near stations are flexible enough to make best use of surplussed properties that benefit local communities and drive transit ridership. That same principle very much applies even to nearby private property, too.

In statement last week, Snohomish County Executive Dave Somers expressed support for the technical resource effort and grant. “As we continue to engage the community in planning for light rail service into Snohomish County, one of the highest priorities is ensuring we have maximized transit-oriented development opportunities, creating jobs and housing for all families within the area and across the Puget Sound region,” he said. “I want to thank our Congressional delegation, whose continuing support for transit in our region helped secure this grant.”

Somers’ planning and transportation departments are working on a subarea plan around three future light rail station areas (including one infill station). So collaboration with Sound Transit could be mutually beneficial to realizing shared system, community, and regional goals.

Rogoff also mentioned that Seattle received a similar $1.8 million planning grant that will be used for transit-oriented development along the West Seattle and Ballard light rail extensions.