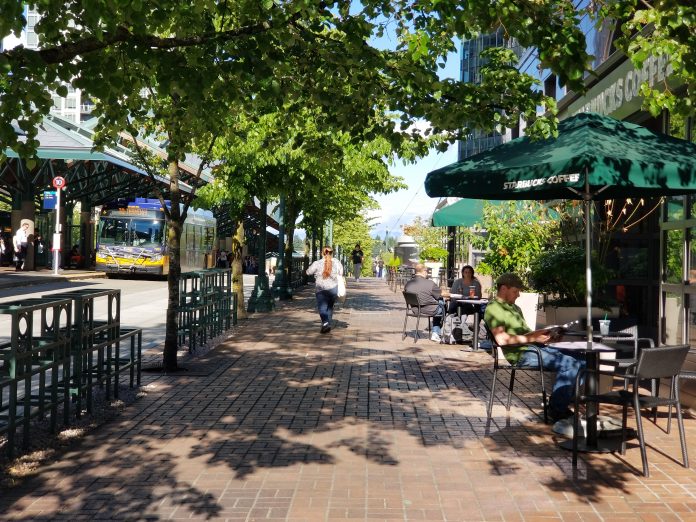 Bellevue Grand Connection is a once-in-a-lifetime opportunity. How do we get the most out of it?

Downtown Bellevue is amidst its biggest growth spurt over the past 10 years. The Seattle Times identified it as the region’s second-fastest growing neighborhood after South Lake Union. Its population increased by a whopping 73% from 2010 to 2017. Its population density sits at 18,000 people per square mile, which is nearly identical to South Lake Union. Combine that with the fact that about 40% of downtown Bellevue is ripe for redevelopment and one can imagine how the population and density will double once more.

What can we expect from all of this? Certainly an increase in the number of people walking the streets. And that’s a good thing—more people make for a livelier and safer space. But one of the common remarks people make about Bellevue, especially when coming from Seattle, is that it is not very pedestrian-friendly. Wide and loud streets like NE 8th St make for an alienating place that few people want to hang around and indeed 8th gets few pedestrians.

Luckily, the City of Bellevue has recognized this unmet need and is working on a plan for an improved pedestrian link for the city’s key amenities—the downtown parks, shopping destinations, transit infrastructure, and trails system—all amid major office and residential buildings. This is known as the Bellevue Grand Connection and even includes ambitious plans for a lid over I-405.

Goals for the Street

This is truly visionary thinking on behalf of Bellevue city planning—every city needs to have a central public space—where friends and family meet, business meetings can occur, or people can do some of their errands. This can form the heart of the neighborhood that people identify with.

Now, of course Bellevue has a number of great streets like Main Street and Bellevue Way, but the central core of downtown going east-west is really missing that. So the Grand Connection effort aims to fill that gap.

What can we expect to do in such a space?

So what are good examples of existing spaces that fit the criteria above?

Take a look at this passage from Seattle’s University Village:

Here is another spot further down the same passage in University Village.

By default, developers seek to provide larger spaces which command higher rents from bigger businesses. Incentivizing at least a few spots per block with smaller retail spaces can help in diversifying the mix of businesses, especially as it enables smaller businesses to start up there.

Again, here is an example from University Village:

And from Main Street. The width of retail is one of the reasons it is so successful.

So what are specific practices the city can incentivize developers to implement based on the above?

We have a once in a lifetime opportunity to create a new center of the neighborhood, a place many people will identify with. The choices made now will persist for decades and will set the tone for the future development of Bellevue.

Let’s make the investments that will strengthen our community the most.