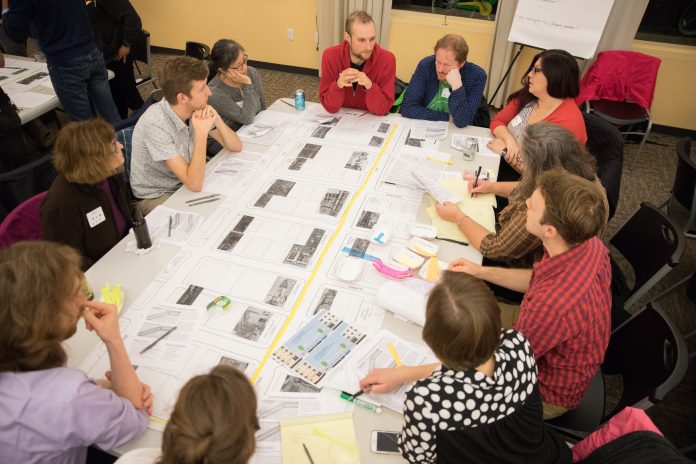 Using a new online survey, community input will be collected until the end of the year.

In October Central Seattle Greenways, Seattle Neighborhood Greenways, and the Capitol Hill EcoDistrict held a community design workshop that brought 150 people together to discuss their potential design ideas for the protected bike lanes coming to Pike and Pine Street on Capitol Hill in 2019.

The protected bike lanes will operate in separate directions on Pike and Pine between I-5 and 1st Avenue downtown; however, on Capitol Hill the City has determined the bike lane will need to run on Pike Street only until it connects with the existing protected bike lane on Broadway. As a result, big decisions will need to made about several important design features such as:

Concerned that not all community needs were represented at the workshop, the organizers have decided to extend the conversation using an online survey that will be open until the end of the year.

In an effort to make sure that all impacted communities are consulted about the future designs, the organizers will also engage in targeted outreach and attend community meetings.

“Our goal through all of this effort is to ensure that everyone who has an interest in the street design has a voice in it,” Gyncild said. “We want to make sure that our advocacy improves the street without creating unexpected harms.”

The input collected from the survey will be used to prepare a high-level summary for Seattle City Council, as well as a more intensive analysis that will be shared with the Seattle Department of Transportation (SDOT) and used to direct community advocacy efforts. The data will be shared by the end of January, or earlier, to ensure that it can meaningfully impact SDOT’s design.

Business owners from the Pike/Pine corridor were present at the earlier community design meeting and some expressed frustration at the loss of parking that would occur with the addition of the protected bike lanes to the streets.

Concern voiced by the Capitol Hill Chamber of Commerce about how protected bike lanes would impact businesses’ access for deliveries was one of the reasons why a proposed extension of the Broadway protected bike lane to Roy Street has been put indefinitely on hold.

To avoid future conflict, the Pike/Pine protected bike lane organizers have been working to ensure businesses are included in the conversation. Potential mitigation strategies for businesses will continue to be explored as the project moves forward.

“Ultimately, we’re advocates, not city officials. All final decisions will be made by the City,” Gyncild said. “But we know that when a community comes together with a strong vision and articulated priorities and concerns, city planners are much better able to design a street that works well.”