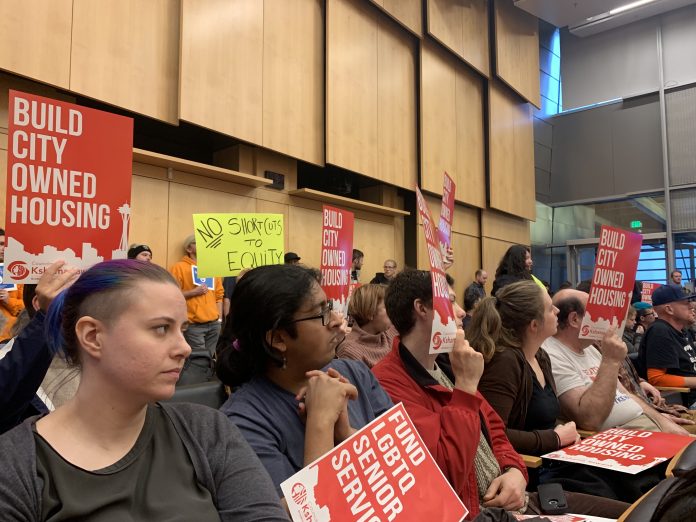 While introducing her $480 million housing bond amendment, Councilmember Sawant called for action. “It’s reasonable if councilmembers want to oppose one or another option, but I feel it is not responsible to not do anything. It’s unacceptable to just have the minimum possible funding in this budget for affordable housing given the scale of the crisis,” Sawant said.

Before joining with majority of the Council to vote against the amendment, Councilmember Lisa Herbold made a statement in defense of the Council’s decision.

“On the legislation we voted on… there’s $10 million dollars for low-income housing, I’m not going to pretend that that compares at all to $480 million dollars, but there is a housing bond that we are looking at next year,” Herbold said.

She went on to explain that she would also vote against the amendment based on her support for a statement of legislative intent sponsored by Councilmember Teresa Mosqueda that would collect information related to using housing bonds as a long term revenue source.

“I think [the statement of legislative intent] really cues us up to get the information that will better guide us for setting forth policy for the City that I hope in the future will become an annual housing bond,” Herbold said.

Mosqueda was the only other councilmember to vote in favor of the failed $480 million affordable housing bond amendment.

This decision was likely influenced by Mosqueda’s strong stance as an affordable housing advocate. While the Council did not adopt any of Sawant’s affordable housing amendments, it did adopt an amendment calling for the City to perform a Race and Equity Toolkit (RET) analysis of the City’s Comprehensive Plan update sponsored by Mosqueda. The amendment passed with a 7-0 vote. Both Councilmembers Harrell and Sawant were absent from the vote.

“This request is explore what an actual equitable growth strategy looks like today, remembering that it was 24 years ago that the Comprehensive Plan was created and it has helped to guide our city’s development policy since then,” Mosqueda said.

Although it will be years until the next major Comprehensive Plan update is adopted in 2024, the hope is by creating a RET now the City will be able to get ahead of the process and compile additional data inform anti-displacement strategies.

A Mixed Bag for Transportation Advocates

In its current form, the proposed budget contains provisions that will generate both support and frustration from transportation advocates. One of the bigger wins was the requirement that the City study the impacts of adaptive signals on pedestrians and cyclists before further implementation. The Mayor’s original budget called for heavy investment into adaptive signals, with an increase slated at $4.5 million in 2019 and $6.8 million in 2020.

The MASS (Move All Seattle Sustainably) Coalition, of which The Urbanist is a member, made a delay in implementation of adaptive signal investments a top priority in its open letter to the Mayor and City Council.

Other MASS Coalition priorities that advanced in the budget session were funding for Rainier Valley Safety Corridor Project and expansion of the Homezone pilot project, which makes improvements for pedestrian safety on residential streets without sidewalks.

To the frustration of many transportation advocates, the Council voted in favor of redirecting funding from red-light camera revenue from Safe Routes to School programs and into the General Fund. Red-light cameras generated a higher amount of revenue than anticipated in the last year, causing a budget windfall. The red-light revenue change will be in place for 2018, 2019, and 2020. During that period 100% of revenue from red-light cameras will be redirected into the General Fund for a total of about $2.7 million.

Advocates, like Gordon Padelford, Executive Director of Seattle Greenways, wanted to see those funds used to increase Safe Routes to School programs. While the group is currently collaborating with four high-need low-income elementary schools on safety project plans that will be implemented soon, the demand far exceeds the current resources.

Referring to the fact that many schools have waited years for walkways, Padelford said in a recent Seattle Times article that he could imagine there are “95 other schools further down the list.”

While the Council acknowledged that the increased revenue from red-light cameras indicates Seattle’s streets are not becoming safer, it also defended the action, citing the fact that no Safe Routes to School programs would be reduced as a result of the change.

An allocation of roughly $1 million to study a future congestion tax was a final topic of debate for the councilmembers at the end of a long session of negotiations. Referring to the congestion tax as “tolls,” Sawant argued that the money would be better spent on affordable housing.

“I’m not sure what the real motivation of these tolls is,” Sawant said. “Maybe so Jeff Bezos can have fewer working class people in his way when he drives to work?”

While other councilmembers cited concerns about the potential equity impacts of congestion taxes, the group ultimately decided to move forward with the investment.

“We need to understand if there is a system the public would actually support, so it’s a ways off,” O’Brien said.

On Monday, it will be interesting to see if any dealmaking completed over the weekend results in changes to the final budget package. That being said, it appears highly unlikely that the current level of investment in housing and transportation will substantially change.