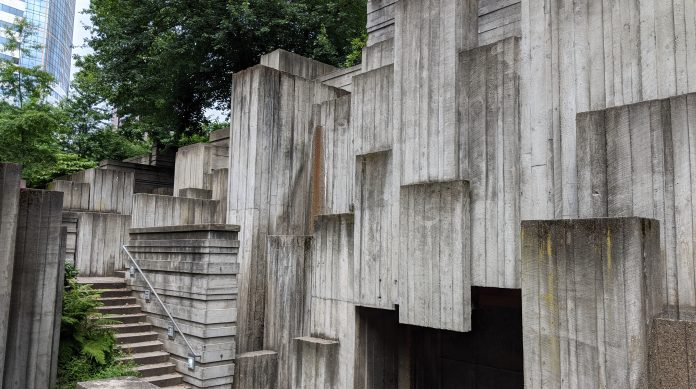 Seattle Parks and Recreation and the Freeway Park Association began their open house and survey this week for the planned Freeway Park improvements. This open house follows up and reflects the results of a previous public outreach phase from this past October. The park consists of a half dozen or so areas, four of which are the subject of the open house.

Spearheaded by Jim Ellis, Freeway Park was the first park to lid a segment of freeway. Now surrounded by a sea of construction in neighboring First Hill, and Downtown, the 5.2-acre park is getting upgrades alongside the expanding convention center.

Approaching its fifth decade of service to the local and convention-going communities, the green and concrete park is in need of repairs. On top of repairs, the parks department is hoping to restore and possibly improve the park’s original features.

The improvements are being funded by $10 million received by Seattle Parks and Recreation from the Washington State Convention Center Expansion Project. $9.25 million will be slated for capital improvements to the park. The rest of the budget will be used for activation/events inside the park.

Seattle Parks and Recreation is prioritizing improvements to signage, planting, accessibility, entrances, programming, and services; repairs to drainage, irrigation, and seating; and the possible additions of restrooms, play-safe fountains, and permanent storage.

Themes of lighting, directional or informational signage, and plantings are a clear focus to the parks department. From my own time in the park, I too have noticed the lack of lighting and clear signage. It was also clear that the plant life could use some help. When I recently explored the park, the Box Gardens were especially underutilized for planting.

The open house also highlights the Upper Lawns, Pigott Corridor, 8th Avenue Entrance, and Seneca Plaza. In line with the core themes of the improvements, upgrades to theses areas relate to accessibility, green space, and visibility. The most impressive suggestion is a new staffed park building with restrooms and storage in Seneca Plaza.

The Box Gardens appears in need of the most improvements, as it seems to be the most neglected part of the park. More mention of the gardens was made during the first open house round last year, but it seems to have mostly disappeared from the current one.

As described in the presentation of the first open house, the original intent of the Box Gardens was to be the iconic feature connecting the park above to the interstate below. It was supposed to have lush planting juxtaposed to concrete structures. Today, much of that planting is lacking or untended.

Effective abandonment is admitted in that presentation. The first survey brought up ideas of a small dog park or skate park, art or light installations, expanded land areas, or a new planting scheme, but those seems to have fallen away as concepts.

As it reaches down into I-5, the Box Gardens might be the most visible part of Freeway Park. Personally, I think it should be revitalized with the rest the park rather than be a forgotten element. Doing so will ensure that the whole project thrives, as the city’s first lid project did so many years ago.

This park revitalization project on balance could help serve as a model for potential future lid projects. However, Lid I-5 still has a way to go before breaking ground as it is still in the planning process and is now transitioning into its detailed design phase. Be sure to give any of your own feedback to the online open house survey that will be open through August 5th. Additional details can also be found on the online open house.