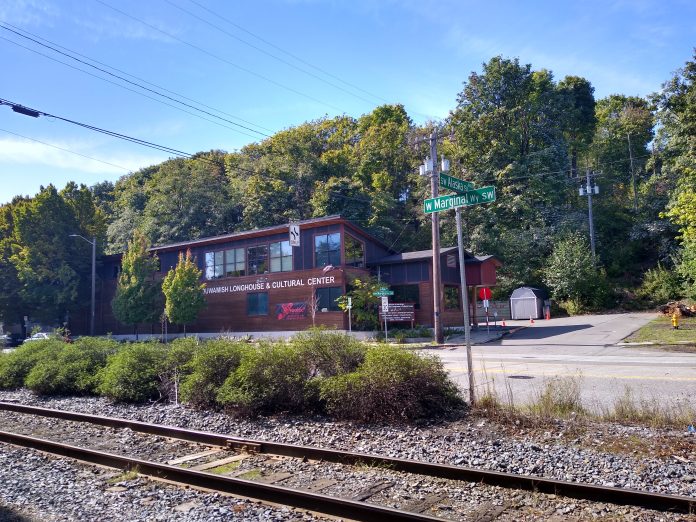 The Seattle Department of Transportation (SDOT) is prioritizing long overdue street improvements on West Marginal Way SW near the Duwamish tribe’s Longhouse and Cultural Center–a route facing very high levels of vehicle traffic due to the closure of the West Seattle Freeway. A majority of the improvements will be in place within a year, the department told a meeting of the West Seattle Bridge Community Task Force during its last meeting. The improvements include a new signalized crosswalk across Marginal Way near the longhouse, a pedestrian pathway where there is currently no sidewalk, and an extension of the Duwamish Trail upgrading a section where people must bike on the sidewalk.

The Longhouse & Cultural Center, which receives tens of thousands of visitors annually, has long been cut off by heavily used Marginal Way, with no way to cross near the site without being daring enough to try and force fast-moving traffic to stop. The tribe launched the Duwamish Longhouse Pedestrian Safety and Accessibility Project to remedy this. In 2019, SDOT installed paint and posts that funneled traffic into one lane in each direction near the longhouse, citing an inability to afford to install a full signal. The project was not selected for a Neighborhood Street Fund grant that same year that would have paid for a signal.

The improvements gained special urgency with the amount of traffic being diverted away from the West Seattle Bridge after it closed in March. SDOT is in the process of implementing a large number of projects intended to reduce impacts on surrounding neighborhoods caused by the increase in traffic heading to the 1st Avenue S and South Park bridges. But the improvements at the Duwamish Longhouse won’t go in until next summer due to the complexity in coordinating with BNSF railroad, which controls the railway crossing adjacent to West Marginal that the new signal must also navigate.

The new pedestrian pathway is not a segment that SDOT intended to include in its plans for new sidewalks in Seattle, but now it calls the connection “critically important”–which it clearly is. It will bridge a gap in walking and rolling space on either side of the new signal near a major cultural destination. The Urbanist and the rest of the Move All Seattle Sustainably (MASS) Coalition backed the Duwamish tribe’s request urging funding during budget season in 2019.

The installation of a protected bike lane to complete the gap between the Duwamish Trail and the connection to the West Seattle Bridge Trail will also be transformative. The Duwamish Trail is an amazing amenity connecting South Seattle, but its weakest point has always been this segment, where people riding bikes have to use the sidewalk or risk their life in fast-moving Marginal Way traffic. It’s as if the Burke-Gilman Trail had a segment where riders were dumped onto a narrow sidewalk.

The protected bike lane will repurpose an underutilized lane of Marginal Way, with space for people biking in both directions on the west side of the street. A huge majority of the traffic on that stretch was already utilizing the inner lane only, because the road goes down to one lane near the Longhouse anyway.

These improvements made it into a 2021 budget that is hemorrhaging funding for walking, biking, and rolling improvements, even as the Seattle Department of Transportation moves forward with plans to issue $100 million in bonds for potential West Seattle bridge mitigation or repair, to be paid back with future real estate taxes.

Allowing access to the Duwamish tribe’s Longhouse to degrade to the point it is at right now should never have happened, and the sooner that it gets remedied the better. You can read more about SDOT’s plans for West Marginal Way here.