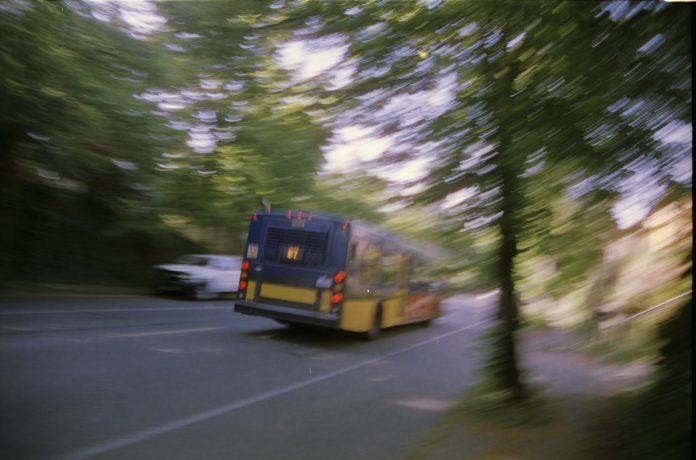 As in several of the posts in this series (see below), I’m sprawled out on a bus home after a long day working. I’m exhausted and happy, sitting near the front, chatting up the operator. Tonight we were talking about what drivers always talk about: schedules.

“This one actually has pretty good breaks on it, right?”
“You know, I haven’t had any problems,” he replied. “And it’s what, ten hours and change.”
“Oh wow. Last shakeup this used to be a bonus time piece. They must’ve tacked on another round.”
“Must have. Speaking of breaks though, I’ve been doing that 65–”

Lots of drivers complain about schedules; I tend not to. I know it’s something I can’t control, like fare, so I let go of it. I just drive the route. But the 65/67 gets to even me—and him, for I knew the gent I was chatting with was similarly laid back—because that route’s murder on the body. It’s one thing to run late, but to be so late you’re seeing passengers on the other side of the street who are waiting for your bus, and you want to use the restroom… doing that for eight hours every day isn’t fun. No to mention a 70-block stretch where there’s a zone about every two blocks.

“It’s just so weirdly timed,” I said. “They give you all this time to get from Northgate Transit to 75th, and then if it’s peak they give you a bunch of time to get down to Light Rail, but once you get down there you’re completely screwed going north on 35th. Completely!”
“Completely! I actually filled out one of those forms and stapled the run card to it because I said, this is ridiculous.”
“It’s ridiculous! You can’t get to QFC without being at least 8 minutes late, and it takes 8 minutes just to walk to QFC, plus walking back, plus actually using the comfort station—”
“And you know they’re not giving you 25-30 minutes up there!”
“And with all those zones they have on 35th, there’s no way you can—you just can’t get up to speed.”
“You can’t.” He sighed.
“Yeah, that one’s a bear. I used to, last shakeup I did the very first 65, it’s like at 4:30 or something. Four o’clock in the morning, and I’m already running late! I’d be going reverse peak at Five AM, five minutes down, it’s still dark outside.”
“You know, there was this one time where I pulled out, and managed, miraculously, to get no passengers and no red lights even, all greens, everything, from the terminal to one of the early timepoints. And I was already two minutes late! And of course after that it just snowballed. All greens and no people!”
“Oh my gosh. Because under those circumstances you’d think you oughta be early.”
“Yeah.”

Enough complaining. I tried to remind both of us of a healthier way to look at all this. “You know, there was this senior guy told me once, way back before we had any of this, once he got late, he’d put the runcard back in his pocket and just drive the route safely.”
My companion nodded, understanding. “Because why kill yourself.”
“You know, I do the same thing! Once I know I’m gonna run hot, I change the DDU screen to something else, like the text messages or something, so I can’t see the lateness. It works wonders.”
“Because then you’re just being safe.”
“Instead of sort of, ‘seeing red’—”
“Yeah—”
“—And getting pissed off at everything that holds you up. Else you’re just gonna have a heart attack.”
“You know,” he said, “I decided to change my focus. I decided to change my focus to, I’m gonna drive it legal.”
“Yeah.”
“If I get a yellow, I stop for it. I’m gonna take the turns at five, I’m gonna do this and that, not gonna try and cut all these corners. ‘Course I get really behind. But I just press that Late Beyond Recovery button. When I get to the terminal, of course there’s no break, but I press the thing, I’m taking my union break just like it says on the runcard. Now, course I got totally slammed all night—”
“Ha—”
“But I felt great! I felt refreshed!”

I knew just what he meant. “And you know, that’s the best feedback you can give them upstairs.”
“Exactly. All they see are the pie charts of look, these are running mostly on time. They don’t know that you’re busting your ass to get there. They think oh look, they’re on time. And what we’re doing to get there is just not safe. I was talking to Kevin about this, he said we are our own worst enemy.”
“Totally.”
“And I’ve been telling all the other operators, just drive it legally. Or else scheduling’s gonna think everything’s okay.”
“It’s the best feedback you can give. Just run it safely. Which in the case of the 65/67 means being horrendously late all night!”
“Ha!”
“And, okay I love your focus on let’s do it legal. Because I mean okay sure, you get slammed—”
“Uh huh—”
“But I think you feel better, more relaxed, paradoxically, if you’re full but not rushing, as opposed to having a half empty bus but you’re killing yourself to stay on schedule.”
“Yeah. You’re in a healthier frame of mind if you’re full but taking it easy, instead of being half full while going crazy driving.”
“And it’s better for your body. You’re not all tensed up.”
“Yeah.”
“And you know how sometimes, you end up catching up when you’re not trying to? Like you’re having a conversation with somebody, all of a sudden you’re hot?”

We laughed. You do what you can. You find a strategy. Some are healthier than others.