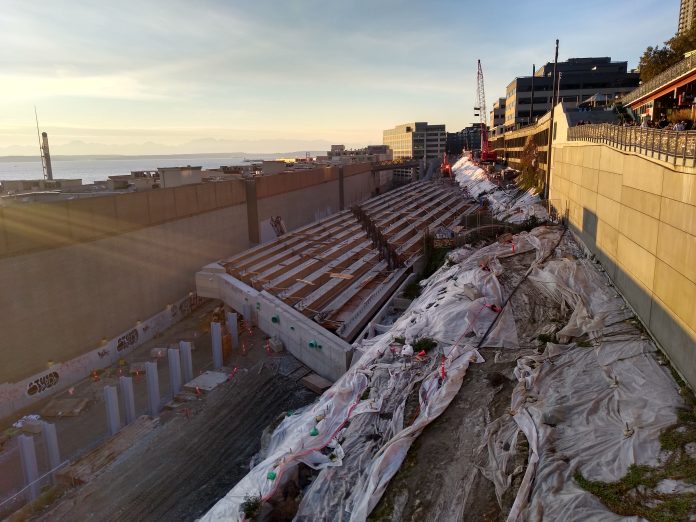 If you’ve visited Pike Place Market recently, and enjoyed the view across Elliott Bay from the new Marketfront Pavilion, you’ve probably noticed work happening on the former footprint of the Alaskan Way viaduct where it used to slope up the hill toward Belltown. The work to create Seattle’s new waterfront has been pretty visible in recent months, but what’s happening here to create a new connection between the waterfront and north Downtown has gone under the radar.

Recently city crews finished installing 18 girders over the BNSF railroad tracks at the point where those tracks exit the 116-year-old Great Northern Tunnel coming from Pioneer Square. Those girders will support a four-lane bridge over the tracks that will form the central segment of Seattle’s newest street: Elliott Way.

Setting aside its incredibly uncreative name, Elliott Way will essentially recreate the Alaskan Way viaduct between the waterfront and Belltown, with only two fewer travel lanes than the elevated highway had. Drivers heading northbound on the new Alaskan Way will see the street turn into Elliott Way and would have to make a left turn onto Pine Street to continue driving on Alaskan Way.

The good news: Elliott Way will have separated bike facilities on each side of the street, raised and separated from vehicle traffic, and distinguished from the decent-sized sidewalks. Landscaping should also make the ride more pleasant, though we likely shouldn’t read too much into rosy renderings. However, green walls planned to cover up the backside of the Market Garage will be a welcome sight.

People biking toward the waterfront from Elliott Way will be well-positioned to continue south on the new two-way Alaskan Way bike path adjacent to the waterfront park. Northbound is a different story. People cycling will need to cross Pine Street, bike on the west side of the road for a block, and then cross Alaskan Way again at Virginia Street to continue on a separated trail. That trail doesn’t fully connect with the amazing Elliott Bay trail north of Broad Street. This could all be remedied by installing a separated path on the west side of Alaskan Way all the way to Broad, but Seattle hasn’t committed to funding that, and it’s also likely that conflicts would arise with the Port of Seattle on that segment of the waterfront.

As for Elliott Way, does Seattle need a new four-lane road bridging Belltown and the waterfront? It seems like the answer is no. The environmental impact statement for Seattle’s waterfront improvements showed that traffic on the northern segment of Alaskan Way, between Pike and Pine street where the new Elliott Way branches off, is expected to be 40% lower during peak periods than at the busier southern end of Alaskan Way near Colman Dock, where there are also only two general purpose travel lanes planned. That analysis assumed a 5% to 10% increase in vehicle traffic due to “regional population and employment growth”–a fact that is completely contradicted by Seattle having nearly flat traffic volumes for the past decade despite massive population and employment growth. This extra capacity will continue to encourage people to drive to Seattle’s new waterfront.

Despite the overbuilt nature of the road, Elliott Way should also create a new set of connections for people walking, biking, and rolling between north downtown and the waterfront. The new road is expected to open in two years. The Office of the Waterfront has a live camera where you can watch construction progress.