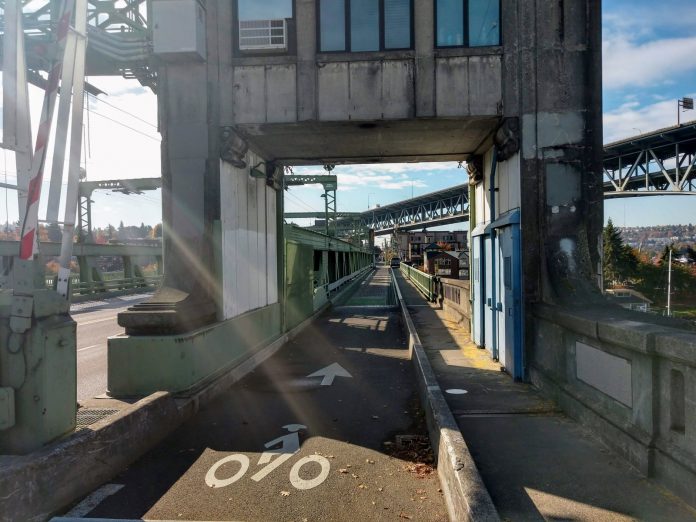 The Seattle City Council has been powering through their budget votes in marathon days this week, and Councilmember Alex Pedersen tried to sneak a controversial bill through at the last minute with minimal community input. Last Friday night, Pedersen dropped his bill with cosponsors Lisa Herbold and Andrew Lewis that would add $20 in vehicle license fees (VLF or car tabs for short) to fund bridge maintenance by about $7.2 million annually. Wednesday, after a lengthy debate, the Seattle City Council passed a substitute bill enacting a $20 car tab increase but delaying a spending plan until April to allow an outreach and stakeholder engagement process, as The Urbanist and other transit advocates requested. Herbold voted against the substitute bill and Pedersen abstained.

The $20 increase partially replaces the $60 in car tabs that are expiring at year’s end due to the wrench that Tim Eyman’s Initiative 976 threw in the Prop 1 effort to renew the key Seattle Transportation Benefit District (STBD) funding source. Seattle also has a $20 car tab fee set aside for road maintenance that isn’t expiring next year. Thus, the net effect is next year Seattle’s car tab fees will go from $80 to $40.

While the state Supreme Court ultimately struck down I-976 as unconstitutional, the uncertainty pushed the Seattle City Council to drop the imperiled revenue source and rely on sales tax alone. Mayor Durkan’s skimpy initial proposal for renewal kept the STBD sales tax at 0.1% rather than raising it, which meant a much smaller revenue stream and package. Councilmember Pedersen staunchly backed the Mayor’s approach and opposed amendments increasing the size of the proposal. Councilmember Tammy Morales led that change when she introduced an amendment doubling the STBD sales tax and measure; Council President Gonzalez offered a compromise amendment halfway between at 0.15% that everyone but Pedersen backed.

Even with the boost, the 0.15% sales tax version that the Council approved–and more than 80% of Seattle voters backed–is significantly smaller than the previous measure due to the loss of the car tab fees. That’s why some Councilmembers pledged to augment the smaller transit measure by increasing VLF once the state Supreme Court cleared the way. The $20 VLF boost has happened but whether it will go toward transit is still up in the air.

Transportation Chair Pedersen made a case that was semantic: “Buses use bridges, too.” He also argued the proposal didn’t need any delay or to be vetted with stakeholders. “Maintaining our bridges takes money and experts, not more process or lobbying at City Hall,” Pedersen said during deliberations. This is the opposite approach he’s taken to homelessness funding, where he introduced more reporting and process, and disputed expert advice in some cases–such as his vote against funding Nickelsville self-managed encampments that have been effective as serving some hard-to-reach homeless folks.

Earlier this year, Pedersen asked the City Auditor to analyze the condition and maintenance needs of City-owned bridges. The Auditor released a report stating between $34 million and $102 million would need to be invested annually to restore those bridges to good condition. Pedersen has not presented a plan for closing that funding gap; his VLF proposal would cover between 7% and 20% of those Auditor figures.

Similarly, the argument Councilmember Herbold presented boiled down to: if you care about bridge maintenance, this hasty proposal providing $3.6 million next year and $7.2 million per year–a pittance of the $34 million plus annual need–is the only way to express that. She worried the community engagement process Gonzalez’s amendment added “could conceivably result in no money for bridge maintenance.”

Regardless of the outcome of the process around spending the new car tab revenue, bridge maintenance will continue to face a huge deficit and Council will be left trying to line up tens of millions in annual bridge maintenance funding. The heavy lift remains either way, and the long-term strategic decisions continue to be punted. The Urbanist has endorsed downsizing Seattle car bridges to make more space for dedicated transit lanes, sidewalks, and bike lanes and reduce climate emissions and wear and tear on our bridges–and the cost of new bridges and future maintenance when we replace them.

Alice Lockhart of 350 Seattle stressed the climate implications that would go into converting a transit funding source to bridge and had the comment of the day: “If there were a climate note attached to this legislation it would read, ‘Are you kidding'”

How climate will factor into the final decision remains to be seen, but at least climate and transit advocates will have a chance to make their case via the process that Council has laid out. A community recommendation for the spending plan is due April 1st and Council indicated it will take the vote by May 1st.

Update: By the way, Councilmember Kshama Sawant also introduced a substitute version that would swap corporate payroll tax hike for the $20 bump in vehicle license fees as the funding source, arguing car tabs are a regressive tax. She failed to get a second. After the vote, she criticized her colleagues for “shamefully” raising car tab fees by $20. While progressive tax reform is long overdue, car tabs are not the ideal place to make the stand. Car culture itself is regressive and the bigger goal should be overcoming our car dependency rather than trying to keep it marginally more affordable with subsidies. Also worth noting that Sound Transit’s Motor Vehicle Excise Tax (also commonly referred as car tab) is one of progressive taxes we have since it hits high-dollar cars much harder than older, low-value cars. Extremely low-income households overall are less likely to own a car or multiple cars compared to rich households. Let’s not get it twisted.