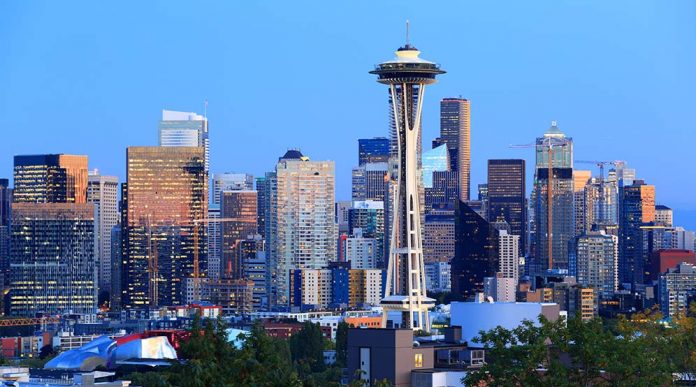 Imagine two million people living in Seattle city limits. You may think this is only possible with a skyline like New York or Hong Kong, but you would be wrong. It won’t take building towers; we won’t have to build the Burj Khalifa in Wallingford. If two million people sounds like a lot, it isn’t. Seattle is bigger than you think, we are only a small town in our mindset. Manhattan has close to two million people on a small isthmus of 20 square miles. Paris handles more than two million on 40 square miles. Geneva, Switzerland fits over a quarter of Seattle’s population on less land than Magnolia and Queen Anne.

Seattle is 84 square miles, we have the space

Getting to two million people doesn’t require highrises, sky-gardens, and helipads. It simply requires re-legalizing multiplexes and rowhouses. Once upon a time, when we built Wallingford, Queen Anne, Capitol Hill, and many other charming neighborhoods around this city, multiplexes were legal. So much so that Queen Anne has an apartment of 33 units taking up just five levels and a quarter of a city block. These neighborhoods feature brick cladded six-plexes, eight-plexes, and twelve-plexes. They range from three to four to five stories. These were legal to build in every corner of the city. What it takes to get us to house two million people is simply restoring those zoning policies we since banned in favor of racial segregation and exclusivity.

Multifamily housing doesn’t always have to be studios, one bedrooms, and small efficiency dwelling units. The Narada Apartments in Queen Anne–remember the one I mentioned above that has 33 units in just five stories? Each unit averages over 1,000 square feet. Big enough for a family or someone who wants to share the rent with roommates. Search Redfin and you’ll find hundreds of single-family homes much smaller than the units at the Narada.

For all of Seattle’s neighborhoods, a three-story sixplex fits entirely within the height allowances we regulate for single-family homes. Now, some will say they don’t like living below someone, and that is understandable. Rowhouses are wonderful, charming, and built all over great cities like New York, St. Louis, and Chicago. They are narrow and deep. Seattle builds these wrong, building them too narrow and too shallow, with the stair taking up precious space and ruining the layout. By allowing more lot coverage and removing parking minimums, Seattle can unshackle this building type to mimic what has been done for centuries around the world, building narrow and deep row houses. By allowing this flexibility citywide, this is how we house a city of two million.

Speed up the review process

Re-legalizing rowhouses and multiplexes on Seattle’s 30 square miles of single-family zoning isn’t enough. The process from planning to construction needs to speed up. Design review should increase the threshold of qualifying projects to twenty-story towers, or more, and public buildings–like libraries, stadiums, and convention centers. By doing so, these overworked volunteer boards can spend their time focusing on bigger projects rather than delaying small apartments over silly brick arguments that riled up neighbors to mock the process with Dr. Seuss poems. By removing small apartment buildings from the bottleneck of design review, developers can build these faster, saving money and lowering the rent or sale cost.

Seattle already increased the threshold for qualifying projects, and there is a bill going through that would exempt all qualifying affordable housing projects citywide. With neighborhood specific design guidelines–robust documents ranging from massing practices to material selections–we don’t need more community input. Projects will still provide their design for city review and projects will still be carefully integrated into our existing neighborhood fabric.

Seattle’s infrastructure is set up for two million

Now, you may think that two million people will overextend our utilities and services. Despite the decade of growth that rivaled some of the biggest booms in this city’s history, Seattle City Light is not selling more electricity. In fact, our building efficiencies have increased so much we are flatlined on power generation despite growing the customer base.

Our transit system can also be upgraded and expanded with the robust bus network that already reaches 90% of the city in a ten-minute walk shed. As we continue to expand our light rail network, with rumors of a fourth, all-urban Sound Transit expansion, we will continue to offer quick, sustainable travel throughout the city and region.

What we need is leadership

Increased design review thresholds and eliminating parking minimums can be passed with a stroke of a pen. Allowing multiple units–and slightly more lot coverage–in our single-family neighborhoods can be done with the 2024 Comprehensive Plan update. In fact, chances are this would be a popular reform.

Single-family zoning takes up 75% of the land we can build housing on and doesn’t house the majority of us. The other 25%? That 10 square miles is where the majority of the population lives. And no, they aren’t all renters, even though the city is a majority renter now.

Multifamily housing makes up 60% of Seattle’s housing stock, with nearly as many homes in large apartments as detached one unit structures. People like the flexibility of housing options, so why not re-legalize it citywide? We have already had this conversation for five years, we already know single-family zoning’s racist and exclusive history. We have beaten this conversation to death. These measures are such obvious no-brainers, such obvious ways to make Seattle more welcoming and affordable. Many of the leaders who have been quoted saying these things are about to be re-elected, so what are we waiting on?