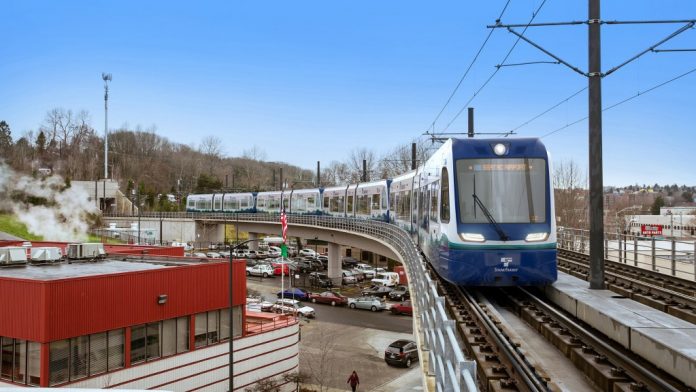 The more you look at the new Link train’s face, the harder it is to discern exactly what emotion it’s trying to express. Is it smiling, or is it rolling its eyes at you? Is its bumper just a huge underbite? Some questions science just can’t answer.

Last week, a few of Sound Transit’s new Link trains (dubbed the Series 2 LRVs) rolled into service. Unlike the older Japanese trains, these new ones are made by German manufacturer Siemens, a company that makes everything from X-ray machines to wind turbines (though the trains themselves are actually built in Sacramento). They are the S700 model, and Sound Transit ordered 152 of them. Only a few of the new Series 2 trains have been deployed so far (and most haven’t even arrived yet) because the entire order was meant to cover all of Link’s expansions to Redmond, Lynnwood, and Federal Way. We’re still preparing for Northgate right now, so we don’t need that many yet. Meanwhile, Link’s older trains are gradually being swapped out and reprogrammed for East Link to Bellevue.

The total cost for these trains? About $624 million (or about $4.1 million per car). That might seem like a lot (and it probably is) but light rail trains usually last for a really long time — Portland’s trains from the 90s are still alive and well — so the numbers usually begin to look better in the long run. Plus, they get cars off the road.

The other night, I was able to catch one of the new trains after a short trudge to Mount Baker. Not all Link trains are the new ones yet — Sound Transit is still in the process of transitioning their fleet — so it did take some time and a sliver of luck to find one. From afar, the new trains look (at least to me) sort of like a spaceship. The headlights are probably the most recognizable part of the trains’ futuristic design and seem lifted straight out of a sci-fi movie. But otherwise, the rest of the exterior isn’t that much different than before.

Inside, the new Link trains are kind of like that feeling you know something’s off, but can’t pinpoint exactly what it is, or sort of different while overall being very much the same. The seats are different, for one. They’re now a fabric version of the newer bus seats, and are mostly okay to sit on. You can put your suitcase under them too. Also, the floor is gray now instead of blue, if it makes a difference.

Sound Transit was keen to highlight online that the new trains have brighter LED lights inside, new destination signs, bigger windows, and more bike hooks (four instead of two per car). I wasn’t able to fully experience the big windows on my nighttime trip, but I suspect they’ll make the train feel more airy during the day. You can use them to look up at the sky and reflect on life’s musings.

The destination screens also make it a lot easier to know where you’re going. They can be reprogrammed to show other stuff (like alerts, perhaps). I think they’re a lot better than the amber scrolling dot matrix signs on the old trains. The bike hooks are a nice touch too, a big contrast to the ones in the old trains where the bike handles would block half the aisle when it was hung. Your bike will have more room on the new train and have room for a friend. That, coupled with the train’s joints and middle section being wider, should make it easier to move about. Overall, the trains definitely feel roomier than before.

Maybe it’s just a me thing, but I can’t help but wonder if warmer colors and softer lighting could have made the trains slightly less stale. The new LED lights on the trains seemed a bit too bright at night, and more-or-less blinded everyone’s view out the windows. But I digress.

There is something else that I haven’t been able to pinpoint though, and it’s how the trains smell. You might remember that the old trains (for whatever reason) smelled sort of weird, like an airplane. Obviously, since we still need to wear masks, I couldn’t take a giant whiff of the cabin air, but here’s hoping that it smells better.

Other than that, though, the trains still ride as smoothly as they did before (I also highly doubt that they’re faster or anything), and there’s still 74 seats. After all, under their skin, the new light rail trains are still trains — not particularly interesting and hardly anything to write home about, but just there to make a dreaded commute a little more enjoyable. And I think they’re pretty good at that.

Brandon Zuo is a high schooler and enjoys reading about urban planning and transportation. They enjoy exploring the city on the bus and on their bike. They believe that income and racial equality should be at the forefront of urban development. Brandon Zuo formerly wrote under the pseudonym Hyra Zhang.