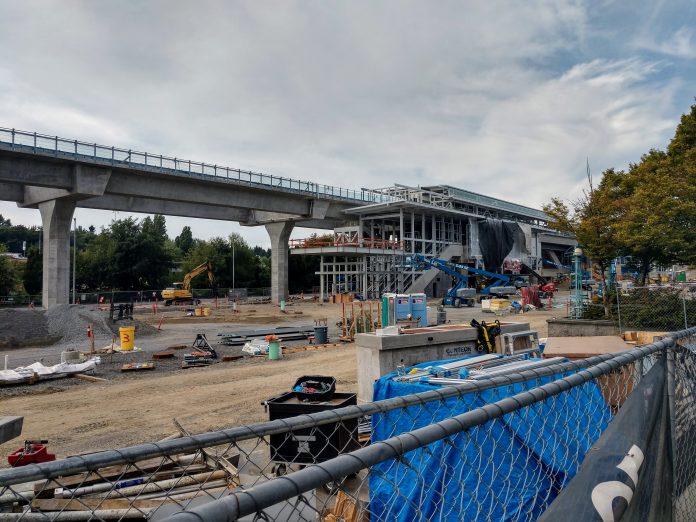 Northgate Link will arrive in 2021, but the neighborhoods around the stations are already transforming. We’re going to take a closer look at the build-up happening in each neighborhood in a series starting with Northgate and then working our way back to the University District.

With trip times to Downtown Seattle cut to a fraction of their former time (with transit times beating car commutes considerably at peak hours), builders are predicting these neighborhoods will be extremely popular places to live and they are adding apartments in droves. For Northgate, the transit ride to Downtown will shrink to 14 minutes.

Of the three neighborhoods getting Link stations in 2021, Northgate is the biggest reclamation project. With or without light rail, Roosevelt and the University District are thriving walkable urban neighborhoods, but Northgate needs a little help. Right now it’s dominated by parking, car-oriented retail, and suburban-style office space.

The dream is for Northgate to become a mixed-use urban destination complete with residential towers. The City of Seattle and King County are trying to get the ball rolling by building a large affordable housing complex on public-owned parking lots near the station. One version of the plan has 240-foot towers near the station, but in June 2018 the County restarted the bidding process, saying it wanted to get more affordable units and take advantage of a new law allowing it to sell the property at a below-market price.

However, the County reissued the Request for Proposals (RFP) in September 2018 without substantially increasing the affordability target or offering the land at below-market cost. The language changed only slightly from “up to 200” affordable units to “a minimum of 200 units of subsidized affordable housing on a dedicated site that will serve households earning up to 60 percent of Area Median Income (AMI) for at least 50 years.” The RFP does mention the market-rate units would need to be subject to MHA, which would likely entail at least another 30 affordable units or their equivalent in-lieu payment. Two companies answered the original RFP: Stellar Holdings and Lake Union Partners. Stellar Holdings, which also owns Thornton Place, appears to have won the bid in re-issued RFP although terms haven’t yet been finalized.

“We haven’t yet completed the process of negotiations with Stellar Holdings,” King County Metro spokesperson Jeff Switzer said in an email.

The reissued RFP had an October 29, 2018 due date, but the County has been quiet about what had been happening with the site as it negotiates–similar to what happened with the Mercer Megablock process. “[T]he County hopes to pick a winning proposal by November 28,” Kevin Schofield reported in September. “Final agreements would then be negotiated by January 31, with an expectation that the County Council will review and approve them by April 30.” In retrospect, that schedule was overly optimistic. One can hope that at least Metro gets a better deal out of Stellar Holdings the second time around. However, given the slow process, one could see why Councilmember Debora Juarez was so steamed.

The first phase will take the parking east of the Northgate Transit Center and convert it to 500 to 600 mixed-income midrise apartments with first-floor retail. The second phase would start after the light rail station opens and the existing bus facility closes in 2021. Highrises were envisioned as a possibility with Phase 2. The Mandatory Housing Affordability (MHA) rezones increased the zoning of the County site to 240 feet–and 145 feet in the neighboring blocks. Since Northgate is a medium cost area and the 240-foot zoning gets a boosted M1 intensity, MHA mandates 9% of new units are affordable or an in-lieu payment of $22.31 per square foot when vesting through February 2020.

The surrounding blocks get the standard M intensity so, MHA mandates 6% of new units are affordable henceforth or an in-lieu fee of $14.46 per gross square foot of development. Every new multifamily development will contribute to affordability (provided it didn’t vest before citywide MHA went into effect this spring).

The ship has probably sailed on having Phase 1 completed when Northgate Link opens. A concurrent opening was a good idea, but the execution was botched. I’d guess Phase 1 comes in 2022 at best and Phase 2 a couple years after. Still, having a large housing complex at the doorstep will contribute greatly to Northgate feeling like a place–and to many more people benefiting from our big investment in light rail.

Since the Northgate Mall opened in 1950, the surrounding neighborhood has been associated with the mall and drive-through culture. A recent and still ongoing wave of transit-oriented redevelopment is seeking to change that and make Northgate a walkable place worthy of lingering rather than driving through. The Thornton Place complex, completed in 2009, was an important step in that direction. It not only added 389 apartments, but also took part of the creek that the mall buried and resurfaced it. Thornton Creek now anchors the space and offers a highly walkable route for people connecting at Northgate Station.

Megadeveloper Simon Properties doesn’t appear to have a similar ecological revitalization in the plan for its planned Northgate Mall redevelopment. But Simon does have density in mind–if still a ton of parking and mostly office space, headlined by the headquarters and practice facility for Seattle’s new National Hockey League (NHL) franchise. The designs are advancing and it appears Simon has managed to vest before MHA, avoiding millions in mandatory affordability payments.

Placemaking and Walkability in Northgate

As it stands now, Northgate Station is nestled in a sea of parking abutting a busy freeway. But things will get better. The freeway isn’t going anywhere (as much as an urbanist can dream) but a new pedestrian bridge over I-5 will connect neighborhoods to the west with light rail.

People walking, rolling and biking will be able to travel west over I-5 in style and enjoy a nice view of Bartonwood wetlands before connecting with the street grid at N 100th St near North Seattle College.

The City and County are also planning to add and improve sidewalks to accommodate people walking and rolling to the station. NE 100th St is slated to get bike improvements, connecting to the bike/ped bridge over I-5. A multi-use path along 1st Ave NE will feed the station from the north.

Development activity has taken off, but not to the same extent as Roosevelt and the University District have seen. Most of the activity has been to the northeast of the station beyond Northgate Mall. Standing at the station construction site, one doesn’t see much sign of new transit-oriented development. The area just east of the mall already has some large apartment buildings, and more are in the works.

Redevelopment has been centered along 5th Ave NE so far. An apartment building with 235 homes just had its Recommendation design review meeting on August 26th. The building includes 209 parking stalls or a parking ratio beyond 80%, which suggests that particular developer and its financiers aren’t betting that Northgate will be free of car dominance anytime soon. A bit farther to the northeast, a proposal for a 290-unit apartment building at 11201 Roosevelt Way has started the design review process.

Most of the historic density was also along 5th Ave NE in the form of older apartment buildings like these below. Fifth Avenue NE is also a transit spine, with Route 41 traveling along from Northgate Transit Center north to Lake City, Routes 67 and 75 using it as far as Northgate Way, and Route 63 using it to head south through Maple Leaf.

Northgate has a ton of potential. But it’s also must break out of the rut it’s in: huge blocks, too much parking, and too many cars. If everything goes well, it could be a tremendous transformation in five or ten years’ time–and it could be one of the more affordable places to live near light rail. But plenty of question marks remain that could be stumbling blocks on the way. Will the mall’s redesign be only superficial? Will Northgate still be an unpleasant place to walk and bike? Will apartment prices skyrocket?

These aren’t insurmountable obstacles, but they could be enough to trip up the grand vision the city has for the Northgate Urban Center. The opening of light rail in 2021 will certainly be a jolt of energy either way.