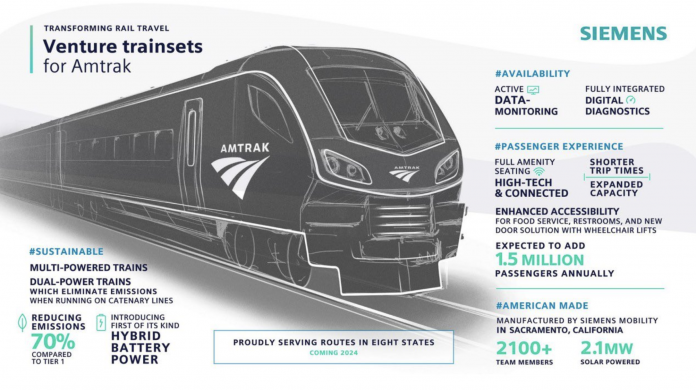 Amtrak has cut a major $7.3 billion deal with Siemens Mobility, a Germany-based manufacturer, to produce 83 trainsets at its Sacramento, California plant. The contract will rejuvenate the aging national passenger railroad company with modern equipment, replacing nearly 40% of the fleet by the early 2030s. A portion of the new trainsets will be coming to the Pacific Northwest and operate on Amtrak Cascades. Alongside this, Amtrak will invest $2 billion to improve facilities throughout the system.

In April, Amtrak announced that it had selected Siemens as the winning bidder to produce new trainsets, but had not yet finalized a contract nor disclosed the trainset model to be procured. However, Amtrak’s announcement this week confirms that the Siemens Venture series trainsets are to be purchased. This model is already owned and operated by Brightline in Florida and several state-supported Amtrak contractors, including the San Joaquins (California) and Hiawatha (Illinois and Wisconsin), have purchased it.

In a statement yesterday, the Washington State Department of Transportation (WSDOT) rail director, Ron Pate, welcomed the news. “We look forward to the delivery of the new trains for Amtrak Cascades service. They will enhance the passenger experience on one of the most beautiful train routes in the country,” he said. “Since our trains will be the first off the assembly line, it’s exciting they’ll be unveiled in the Pacific Northwest.”

Siemens is due to begin delivery of trainsets in 2024. With the first batch coming to the Pacific Northwest, revenue service with passengers could start in 2025 and 2026 once the trains have gone through testing. That is partially predicated on funding though. The new equipment is expected to cost WSDOT about $150 million, which has so far secured about $72.5 million in funding. The bulk of that funding is from federal and state sources, but $25 million has come from insurance as a result of the fatal December 2017 derailment near DuPont. Congress has also appropriated $200 million for national procurement of new fleet equipment, but Amtrak is optimistic that bills to reauthorize transportation funding and President Joe Biden’s expansive infrastructure plan will pass. These bills could ultimately help close much of the difference, but the state and provincial governments in Washington, Oregon, and British Columbia could also help cost-share.

A total of 48 coaches are part of the Cascades order, which is more than enough to create six-coach trains capable of carrying 350 passengers; the average Cascades Talgo trainset has much lower carrying capacity between 244 and 280 passengers. However, the Venture equipment is flexible, allowing for additional coaches to be added to trainsets, if desired. This could allow Cascades to run larger trainsets to meet peak demand when warranted. In addition, Cascades will use the eight Siemens SC-44 Charger locomotives that Washington and Oregon already own.

The new Venture coaches will come with two classes — business and economy — as well as the standard accoutrements for baggage storage, dining space, and a café. However, Siemens touts a long list of great features that passengers may come to appreciate: “The latest trains will feature comfortable seating, individual power outlets and USB ports, onboard Wifi, enhanced lighting and panoramic windows, a more contemporary food service experience, including self-service options, as well as state-of-the-art customer trip information, digital seat reservation system, and navigation display systems.”

The latter features of the Siemens list especially stand out. Knowing where the train is in relation to a destination is something virtually every passenger wants, but something that Cascades has largely not provided. The digital seat reservation system is also intriguing since modern train systems often are able to digitally indicate with seat signs where a passenger will sit and sell a seat across multiple segments of a trip that are not already booked by a single passenger. Amtrak’s system is fairly arcane and doesn’t allow for pre-assigned seats at the time of booking for Cascades, which necessitates passengers arriving early to the station and often creating boarding chaos.

Other features that Siemens has highlighted include accessibility and health: “The trains were designed with the latest health and safety standards, including enhanced HVAC, touchless restroom controls, and automated steps. In addition, they will be designed with Amtrak’s new standard of enhanced accessible features, including inductive hearing loops, accessible restrooms and vestibules, accessible Food Service car, and lifts for customers with reduced mobility, including wheelchair users.”

As far as top speed, the Venture trainsets are capable of running at 120 mph. Tracks along the Cascades corridor, however, are currently rated for a maximum speed of 79 mph. So the new equipment won’t change speeds on the corridor for now, but there is a possibility that with additional upgrades the fleet will be able attain its potential. Additionally, Venture trainsets are designed to handle the many curves of the Cascades corridor well and functionally operate at the same or higher speeds as Cascades’ Talgo equipment. This is important because Talgo trainsets were designed with special tilting capabilities for curves, allowing trains to operate at higher speeds and provide more comfort to passengers. However, the lack of tilting technology on Venture trains should essentially go unnoticed by passengers and provide similar journey times.

For now, Cascades passengers will have to be content with Talgo 8 and Horizon trainsets — the latter of which are stand-ins for Talgo 6 equipment decommissioned after the December 2017 derailment — and meager service levels. The extended Canadian border closure has left service on the Cascades corridor somewhat limited, despite recent service restorations. Until the border reopens, the two daily roundtrips between Seattle and Vancouver, British Columbia remain suspended. However, there are three daily roundtrips between Seattle and Portland on Cascades with two of those extending as far as Eugene. Amtrak Coast Starlight and Empire Builder services are also running once daily trips across Washington and Oregon.

But just when Amtrak services will return to the Point Defiance Bypass — an inland set of tracks between Tacoma and the Nisqually Valley — remains unknown. In April, Sound Transit briefed the Washington State Transportation Commission on the tracks — which are owned by Sound Transit — and noted that the agency hadn’t set a reactivation date of the corridor for use by Amtrak because the safety certification process hadn’t yet been completed. Although, the positive train control system that automatically slows and stops train — if necessary for imminent safety — has been installed. When the bypass does open, it will save 10 minutes per trip, improve reliability, and allow for additional trips on the Cascades corridor. In fact, opening of the bypass is a prerequisite for increasing daily roundtrips between Seattle and Portland to six. But will it be this year?