Democracy is under attack across America. Whether it’s voter suppression laws or election denialism, the power of the voter is in dire straits.

The best way to resist these attacks isn’t by holding tight to the status quo – that’s what got us here. Voters are tired of the divisiveness, the gridlock, the gamesmanship, and constantly feeling like they’re stuck choosing between the “lesser of two evils.”

The status quo isn’t cutting it. There is a better way.

Ranked-choice voting (RCV) is on our ballot in Seattle. Let’s join the pro-voter movement for better elections that’s sweeping the nation. All we have to do is vote for it.

Proposition 1B for ranked-choice voting (RCV) is the way to go. Here’s why.

Ranked-choice voting is tested and proven

RCV has over a century of use internationally and has taken off in America over the last two decades. Today, it’s the election method of choice in over 50 places across the United States. These places run the gamut from dense, progressive cities to small, conservative towns.

The reason for RCV’s rapid expansion is simple: Voters understand it, they like it, and it delivers on its civic benefits. Research shows overwhelmingly that voters find RCV simple to use. Once they adopt it, they don’t want to go back.

As Alan Durning of the Sightline Institute explained, “ranked-choice voting is a battle-tested pro.”

We know ranked-choice voting works and we know voters like it. Let’s not overcomplicate things.

Until New York City adopted RCV in 2021, women had never held more than 18 seats on the City Council. After using RCV, they now hold 31 of the 51 seats.

This isn’t a fluke.

Across hundreds of elections, evidence shows that RCV boosts representation for historically underrepresented groups. Turns out, when voters get to cast a ballot that reflects their values, they are able to elect people they identify with.

That’s why racial justice advocates at The Washington Bus, Puget Sound Sage, and the BIPOC Executive Directors coalition have endorsed Proposition 1B. They know that RCV means elected officials will be accountable to their communities.

With RCV, voters know that their second choice will only be counted if their first choice is no longer in the running. You can safely vote your heart while ranking backup candidates as your second or third choices. This is why voters love ranking their choices.

It’s also in the best interests of candidates to encourage their supporters to use rankings. You’ll frequently hear candidates in RCV races saying, “rank me first, but rank my opponent second.”

This is a game changer. Instead of encouraging divisiveness, polarization, and attack ads, RCV pushes candidates to find common ground.

Put simply, RCV boosts candidates who have the skills to build coalitions and get things done in office. It’s a breath of fresh air.

Why not approval voting?

The truth is, approval voting doesn’t have much of a track record. It’s still in the experimental stages and it’s not clear if it’s even legal in Washington. What we do know suggests that, while it’s an interesting idea, it falls short of the benefits of ranked-choice voting.

In Fargo, North Dakota, one of only two places that’s ever used approval voting in the U.S., a mayoral candidate was asked what difference approval voting would make for campaigns. He responded, ”I would probably bet that every candidate says ‘just vote once’ because that has more power as a vote.”

That candidate was right.

A core problem with approval voting is that once you tick the box for your favorite candidate, as a voter, it’s in your best interest not to tick a second box for a candidate you’re just ok with.

This is why, in approval voting elections, voters often end up just voting for one candidate. They don’t want to risk muddying the waters and accidentally helping their second favorite beat their top choice.

Ranked-choice voting is the only method that will make fundamental improvements in our politics.

Who is behind these campaigns?

The grassroots groups behind ranked-choice voting are the same people who won us mail-in ballots, same-day registration, and more. We’ve built momentum around the “Ranked-Choice Voting Local Options Bill,” fostered partnerships among community-based organizations, and gotten RCV questions on ballots in Clark County, San Juan County, and, of course, Seattle this year.

This is a robust movement that’s wide and deep.

But let’s be real. The movement is strong because it has to be. We need to protect our local democracy as fast as possible because we’re seeing our nation’s democracy crumble in real time as it grapples with ongoing disinformation campaigns and anti-voter legislation.

To smoothly implement a different voting method, you need an organized, established, trusted network of people on the ground to do the important work of voter education.

Right now, the approval voting website shows zero endorsers. They aren’t prepared to do the work of voter education and they don’t have the trust of the local organizations who are.

Meanwhile, Ranked-Choice Voting for Seattle has won the endorsement of our local League of Women Voters, the King County Democrats, the Washington Conservation Voters, FUSE Washington, the Transit Riders Union, and over 30 other organizations and community leaders in Washington.

In fact, this very publication has also endorsed Proposition 1B for ranked-choice voting!

Our broad base of support shows that RCV advocates know something the approval voting team doesn’t: winning a campaign is just the beginning, and fundamental change requires community partnerships that money just can’t buy.

Ranked-choice voting is tested and proven. It has evidence-backed benefits and broad, grassroots support. Approval voting is untested, its purported “benefits” are unproven, and it leaves too many questions unanswered.

If we want candidates who focus on issues, if we want voters to vote their hearts, and if we want a government that answers to us, then Proposition 1B for ranked-choice voting is the first step.

Vote YES on 1 to upgrade our elections, and then vote for Proposition 1B for ranked-choice voting. 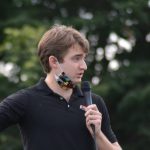 Ben Chapman is the communications manager for FairVote Washington. He has worked for multiple electoral campaigns, including Pete Buttigieg’s Iowa campaign. He enjoys playing music, designing board games, and pointing at birds and pretending to know what species they are.