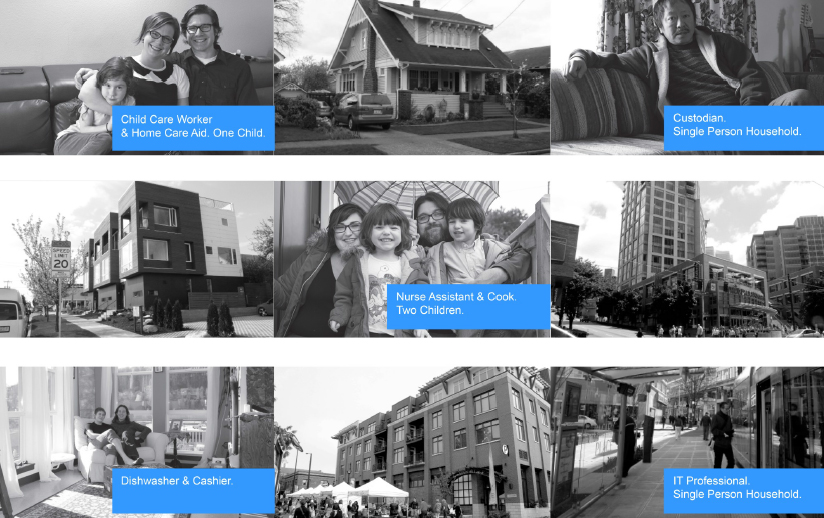 I think it’s a good thing that within hours of Danny Westneat leaking the Housing Affordability and Livability Agenda (HALA) Committee draft recommendations, it was essentially plastered all over city media. But, I also agree with Owen that the title of Westneat’s column was incredibly inflammatory, especially as the HALA didn’t recommend repealing the single-family zones for perimeter block housing (as I think they should). Rather, it’s very true that building typologies on the very bottom of the missing middle housing pyramid generally already exist in some form in the city.

The 38-page draft recommendations on housing policies is brief, and there are a number of errors and omissions. But it is also surprisingly optimistic–or at least it was until this morning when HALA members, Mayor Ed Murray, and Councilmembers partially walked it back.

Despite this setback, there are a few key preliminary takeaways from the direction that the HALA is going. The Report is broken out into four approaches:

The More Housing segment is much more progressive than I thought it would be. It calls for the City to increase the amount of land zoned for multi-family–specifically near green belts, schools and community centers–and for this recommendation to be viewed as more of a long-term mitigation displacement strategy. It also calls for expanding the Urban Villages boundaries. Personally, I have a big issue with the entire Urban Village Strategy–it’s been a massive, failed policy that was wholly designed around protecting single-family zoning. HALA rightly calls this protectionism the source of our present affordability issue, so increasing the amount of land dedicated to actual urbanity is a positive.

More importantly, the report also recommends increasing height limits and codes to maximize economical wood frame construction. In some instances, the changes are minimal–65′ limits to 75′ or 85′–thus making projects viable for “5-over-2” projects. Perhaps as a nod to Alon Bassok, it also also pegs those increase to affordable housing requirements. Impressively, the committee also calls out increasing 30′ and 40′ zones to 75′. Oddly, there isn’t a recommendation to increased floor are ration (FAR) or setback requirements–but most of walkable Vienna and Berlin has height limits around 75′ and FAR of 2.0 to 2.5. Maybe we’re finally getting somewhere!

The report also suggests modifying building and fire code requirements to allow 6-story wood construction. It even references demonstration projects made of cross laminated timber (CLT).  However, it should be noted in much more progressive jurisdictions, wood towers are shooting for over 20 stories.

The multitude of constraining issues surrounding DADUs and ADUs are also called out to be liberalized. Reducing the parking minimums, removing restrictions on owner-occupancy requirements, allowing both a DADU + ADU (a la Vancouver), as well as easing the overly strict regulations that would make them more viable/liveable, are all suggested. All of these are no-brainers and should have been adopted the first time around.

As Owen mentioned, HALA recommends dropping the term “single-family zone” and adopting something along the lines of low density residential zones. After reading through the report, it seems like it would likely be an LR0 with less intensity than even the very limited LR1 zones. I don’t think it goes far enough, but it’s a step in the right direction.

There doesn’t seem to be a recommendation for a large public bonding scheme for public housing as called for by Sawant. Also noticeably absent are suggestions for a Land Value Tax or Value Capture.

The last section includes recommendations to minimize displacement and look for ways to avoid the city losing its valuable, and diminishing, affordable housing stock. Paramount among these are the City itself aquiring existing buildings to preserve affordable housing in perpetuity. Increased tenant support is also critical at this time, and the report recommends finding and expanding operating subsidies for low income tenants, tenant counseling, allowing portable tenant screening reports and increasing tenant relocation assistance.

Noticeably absent from the recommendations is rent control/stabilization. I realize rent control is a contentious topic, but in terms of achieving security of tenure protections for tenants, it should be on the table, at least as a bargaining chip.

The final blast of recommendations is on innovation, specifically reducing the overly redundant, time consuming bureaucracy. Reforming design review, increasing exemptions under SEPA, improving coordination between city agencies (which sounds like is already underway), adequately staffing DPD are all recommended and all seriously overdue–permit intake appointments are months out right now, so staffing-up is definitely a no-brainer.

Overall, I’m impressed with the suggestions, they’re looking much more progressive than I thought they’d be. I was also impressed with the diversity of participants in the work groups (Appendix E). However, I’m disappointed at how quickly diversifying the single-family zones was walked back, but hopefully the City (and more importantly, homeowners) come to their senses and zone for a city that can flourish for all, and not just the privileged.