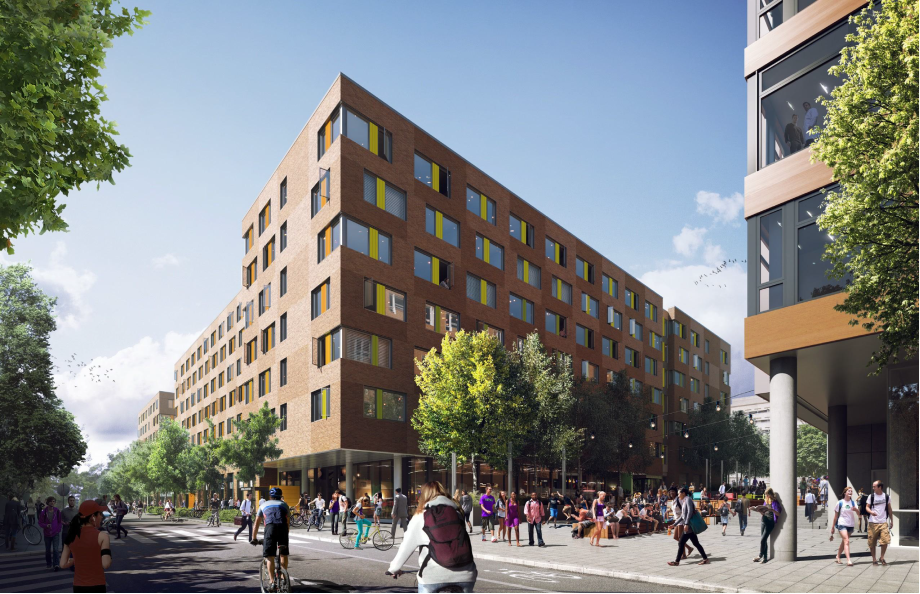 Editor’s Note: Rendering for the featured image is by MIR.

The University of Washington is wrapping up major construction of new student housing in the West Campus just in time for the start of a new school year. The new residence halls of Terry and Maple will provide over 1,100 beds for students wanting to live on campus. But substantial public benefits also come with the new university developments through site improvements. Together the residence hall projects will deliver improved circulation for people on foot and bike through two large public spaces and a brand new Lincoln Way (NE 40th Street). The project as a whole is the result of collaboration between the University of Washington and Mithun, a local architecture firm known for their work on large scale institutional developments.

The centerpiece of the site improvements is what can only be described as an open courtyard on 12th Ave NE. The University of Washington had two primary objectives for creation of this space:

But it was the grade changes from the north and south ends of 12th Avenue NE that truly drove the design process early on. The decline in the street is quite substantial as evidenced in the photos above. And, upon surveying the site and determining how the space could be used, the University of Washington found that it would be difficult to provide access for bicyclist through the corridor while also creating a space for people to use the space as a courtyard and walk between the residence halls. For this reason, the University of Washington decided to promote pedestrian circulation as the focus of the space and keep primary north-south bicycle route on Brooklyn Ave NE.

The courtyard is now fully open with lighting strung above the space and seating provided through metal tables and wood benches built into the edges of the courtyard as the grade of the block descends. Bollards meet pedestrians at both ends of the block as they approach Lincoln Way and NE Campus Parkway while landscaping, planter boxes, and light poles line the corridor from north to south. The main set of staircases descends the center portion of the corridor, but pedestrians can also walk along the residence halls. For those in need of an accessible route, the space has been designed to provide ADA compliant ramps on the west side of the block. Overall, the space feels modern due to the metals, woods, and pavers throughout. This is markedly different from the lesser courtyard just west.

Just one block over from the primary courtyard is a secondary courtyard that splits Terry Hall and Maple Hall in two. This courtyard forms what would otherwise be 11th Ave NE. Entrances to the residence halls spill out onto the courtyard space, but the space is less focused as a place to congregate, due in part to the lack of seating. Instead, the space is largely meant a pass-through and go-between for residents and locals, but there is potential for other uses if the University of Washington decides to program it in the future.

The main similarities to the primary courtyard are the wooden benches and and paver style. But the grade change is more pronounced with a quick descent from NE Campus Parkway. The staircases for pedestrians follow in fairly quick succession to lead people to the toe of the slope. Instead of more traditional planter boxes, the University of Washington has gone with a terraced garden approach for landscaping on the steep incline while planter strips are the focus closer to Lincoln Way. It’s simple, but it does make the space feel lighter and more lively.

Between Brooklyn Ave NE and the Eastlake Ave NE loop to NE 40th St is an east-west street owned by University of Washington, which is called Lincoln Way. This street stretches a mere three blocks and would otherwise be designated as NE 40th St by the City of Seattle. The western two blocks of the street front the new residence halls of Terry and Maple. It’s a unique piece of the University of Washington grid because it is primarily designed to serve only pedestrians and bicyclists. But the Lincoln Street of today is very different from that of few years ago.

The change from only a few years ago is quite remarkable.

The street is fairly standard in width for a two lane road in Seattle with sidewalks on both sides and planter strips. But because it is essentially entirely designed for those on foot, the University of Washington has chosen to place removable bollards at both ends of the block to formalize this arrangement. The bollards also provide flexibility for street use. While the street will be closed to motorized traffic during normal periods, it can be opened for additional traffic on certain occasions. For instance, bollards will be temporarily removed during student move-in and move-out periods. In the past, the street also provided relief for football traffic and that may return in the fall.

The street design is inconsistent when it comes to local bicycle facilities however. The Seattle Department of Transportation has installed two sets of cycletracks east and west of Lincoln Way on portions of NE 40th St. The University of Washington, however, has chosen not to match the cycletrack on their length of the street. There are practical reasons for this, which include vehicle access to Lander Hall, maintenance facilities, and other buildings that get primary access from Lincoln Way via Brooklyn Ave NE. The university feels that this design is the best compromise to meet all street uses.